The final chapter in the long-running legal battle to extradite 90-year-old Charles Zentai to Hungary for his alleged involvement in war crimes has begun in the High Court. 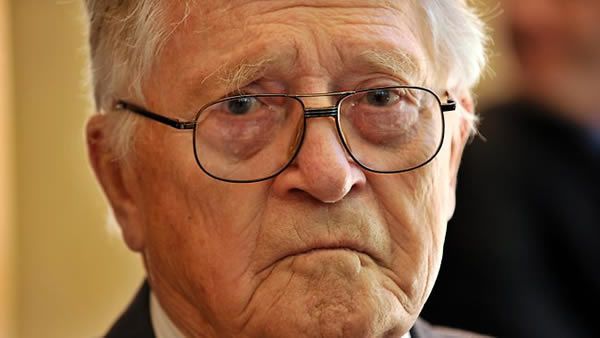 Australia's Minister for Home Affairs is appealing a ruling of the Full Bench of the Federal Court, which last year found it was not open to the government to make an order to extradite Mr Zentai because the offence “war crime” did not exist in Hungarian law in November 1944.

Mr Zentai has rejected the allegations against him and denied any involvement in the crime.

That was when Mr Zentai is alleged with two others to have assaulted a young Jewish man and thrown his body in the Danube River in Hungary.

The minister is appealing on the grounds the court made an error by ruling that the extradition may only take place where the specific offence for which extradition is sought existed under Hungarian law at the time.

Stephen Lloyd SC, for the minister, said the government made inquiries in Hungary and determined that Mr Zentai's alleged offence would have constituted a crime - specifically murder - which was recognised by Hungarian law in 1944.

“He is very anxious and stressed. We have had seven years of this process and would like a result and hopefully he can live out the end of his days in peace,” Mr Steiner said outside court.

Much of the morning's legal argument turned on whether a principle of “double criminality” applied to the case, which would require a comparable crime in Australian law.

Justice William Gummow raised concerns that the extradition treaty enacted between Hungary and Australia in 1995 was silent on comparisons between how the crime was punished.

“This offence of murder, if it was an offence at the end of 1944 by Mr Zentai when he was in the Hungarian army, would have been punishable - if at all - by a military tribunal, would it not?” Justice Gummow asked.

“When we are talking about double criminality, we should not get ourselves into a box - if in 1944 a service person murdered somebody, what is the double criminality under our law? I don't think it is just the state law of murder in the particular state it happened?” he asked.

Justice Gummow said he believed insufficient legal attention was being given to the circumstances in Australia in 1944.

The case has been lodged in the name of former home affairs minister Brendan O'Connor, who has since been replaced as minister by Jason Clare.