Outing: Nancy Reagan, who was wrapped up against the winter chill in a brightly coloured coat, greeted onlookers with a friendly wave

Wearing a bright coat in a vibrant shade of Republican red, Nancy Reagan greeted onlookers with a cheerful wave on an outing in Los Angeles.

The former First Lady and Republican Party icon chose the smart red coat to ward off the winter chill as she enjoyed a visit to Beverly Hills eatery Spago yesterday.

Mrs Reagan, 91, who suffered a bone-breaking fall at her California home last year, seemed to be in good spirits as she enjoyed a day out under the protective eyes of Secret Service agents. Bright: The former First Lady chose a vibrant red coat for a trip to restaurant Spago in Beverly Hills

The widow of former U.S. President Ronald Reagan, who was accompanied by a nurse seen pushing her wheelchair as the party left the upscale restaurant yesterday afternoon, did appear somewhat frail, and faint bruises were visible on her legs.

Nonetheless Mrs Reagan, who has spent some 30 years in the public eye, was as elegantly turned out as ever in her cream suit and colourful coat, and smiled and waved at passersby in Beverly Hills.

Mrs Reagan's ribs were broken when she fell in April 2012. But less than two months later the indomitable former First Lady entertained then Republican presidential nominee Mitt Romney at her house in L.A.

Mrs Reagan was soon back on her feet with the help of a cane, but occasionally relies on a wheelchair to get around. Stylish: The former First Lady of the United States wore a cream suit underneath her smart red coat 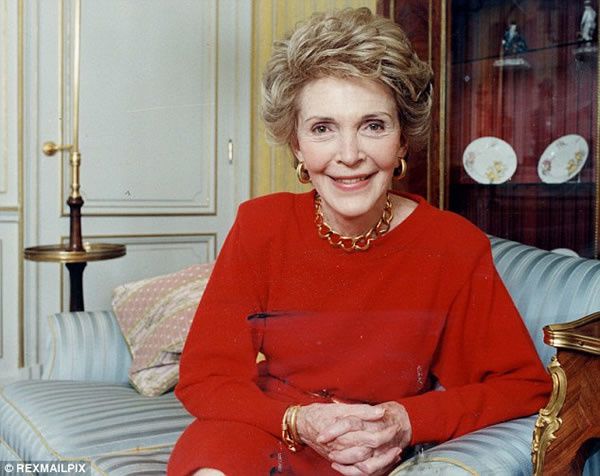 Party loyalty: Mrs Reagan, pictured in London in 1989, has long been a fan of Republican red

This month the California home Mrs Reagan shared with her late husband for 30 years before Mr Reagan became president sold for more than $5million.

The hilltop hideaway home - where the Gipper spent election night in 1980 and received the concession call from President Jimmy Carter - went for $5.211 million, beating the asking price of $4.99 million.

The 4,700-square-foot home sits on two thirds of an acre nestled in the exclusive Pacific Palisades area of Los Angeles.

The house was given to Reagan in the 1950s by General Electric after the Hollywood actor helped make the TV anthology show 'General Electric Theater' a success. Reagan and his wife Nancy lived in the home for three decades as he transformed himself from a movie star into a politician.