Adolf Hitler may have loved his Mercedes limousine, but a wickedly humorous student video showing the vehicle’s modern equivalent running down and killing the Nazi leader as a young boy has left the German car makers “not amused”. The 80-second video went online today and attracted hundreds of plaudits across Germany. But its makers revealed that before uploading the clip they had been legally obliged by Mercedes to make it absolutely clear that the company had nothing to do with the production.

“Unauthorised spot – no affiliation with Mercedes/Daimler AG” reads subtitles at the start of the clip, created by students at southern Germany’s Ludwigsburg film academy. Mercedes said it found its contents “inappropriate”.

The video pans in on a timbered Austrian village in the year 1890. Farmers in smocks and elderly women in dirndls fill the screen, while children peer though wooden fences.

All of a sudden, a modern C-class Mercedes limousine is seen moving gently down one of the village streets. A group of children appear on the road before it, but the car brakes. The “Collision Prevent Assist” has swung into action and prevented an accident. 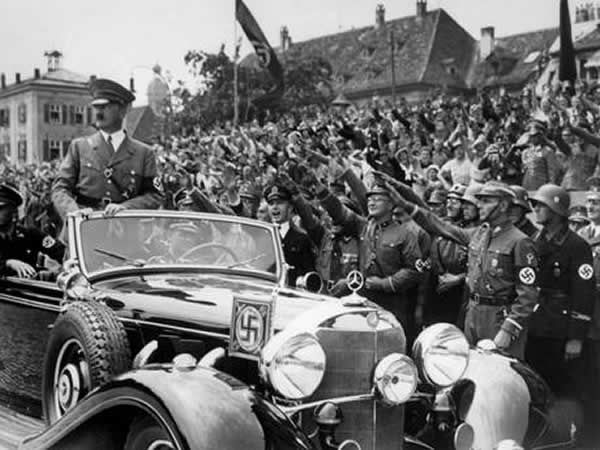 Adolf Hitler in a Mercedes in 1937

The car moves on and the camera switches to a young, dark-haired boy running through the village. There is a burst of tense background music as the Mercedes picks up speed. The boy runs blindly into the street, but this time the car does not stop. Instead it flattens the boy. The face of Adolf Hitler flashes on to the screen.

“Oh, Adolf!” cries the boy’s mother. The car is seen pulling out of the village past a sign bearing its name: “Braunau am Inn” – the Austrian birthplace of Adolf Hitler. The final scene shows the dead boy lying on the street, his limbs arranged in the shape of a Nazi Swastika. “Mercedes Benz – automatic braking system – detects dangers before they arise” reads the closing subtitle.

“Mercedes sells its cars on smart technology which prevents accidents – we wanted to pose the question of what might happen if technology had a soul,” said Tobias Haase, the video’s director who made the clip with Ludwigsburg students Lydia Lohse, Jan Mettler and Gun Aydemir.

Only a handful of comments posted on Der Spiegel’s website today took exception to the video and called it distasteful. Most congratulated the filmmakers on their work and described it as innovative and brilliant. “Mercedes should be thankful for getting free advertising instead of complaining,” remarked one blogger.