The west can't brush aside Russia's historic claims. The peninsula could be leased back along the lines of the Guantánamo Bay naval base 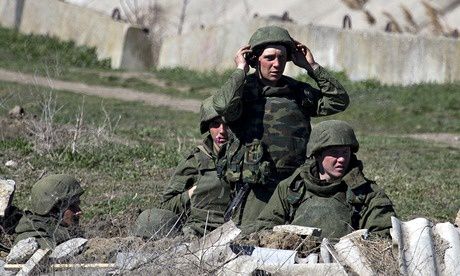 Pro-Russian soldiers in Crimea on Sunday. 'Russia will not risk the new Ukrainian government controlling so much of Crimea that it could render Sevastopol naval base inoperable

The referendum in Crimea has no standing in international law, but the history that lies behind it cannot be brushed aside. For centuries the Russian Black Sea fleet has operated from Sevastopol, in the past 20 years under special arrangements – the most recent signed in 2012 between the Ukrainian and Russian Federation governments.

Today Russia will not risk the new Ukrainian government, which it regards as illegitimate, controlling so much of Crimea that it could render Sevastopol naval base inoperable.Spheres of influence exist in the minds of many nations, not just Russia, even if not formally acknowledged in law.

There are other lessons from history too, which I researched for my latest book. One of them is to be careful about the military encirclement of a potential enemy. In 1907, when Britain built the triple entente with France and Russia, Germany and its triple alliance with Austria-Hungary and Italy felt surrounded. Russia feels this today as Nato's boundaries come ever closer.

Often when self-determination conflicts with territorial claims, it can only to be resolved through negotiation. In Crimea, the US and UK have a special position in maintaining the "independence and sovereignty and the existing borders of Ukraine" – the words contained in the memorandum signed by both countries, along with Ukraine and the Russian Federation, in Budapest on 5 December 1994 after Ukraine returned its nuclear arms to Russia.

Russia continues to refuse to negotiate directly with the Ukrainian government. Its suspicions stem from the German, French and Polish foreign ministers' compromise at the end of February, signed by the then Ukrainian president and representatives of the protest movement. This was witnessed by Russia at the insistence of President Obama, but was swept aside within hours, with the EU powerless to uphold its own diplomacy. The absence of the US and to some extent the UK was a grave error.

But there is something US secretary of state John Kerry and UK foreign secretary William Hague can do: suggest that the Budapest signatories focus on Crimea, and the EU on eastern Ukraine. In this, the US should look to its treaty with Cuba over the US naval base on Guantanamo Bay, signed in the late 19th century following the Spanish-American war. A perpetual lease allows the US "complete jurisdiction and control" while Cuba is recognised as retaining sovereignty. The Guantanamo option for Crimea should be on the table.

Though Russia now controls Crimea militarily, Kerry and Hague should ask it to think back to its intervention in Georgia in 2008. This resulted in the emergence of two entities, South Ossetia and Abkhazia, which have so far been recognised by very few countries. It's also true that Nato's bombing of Serbia – without UN security council authorisation but justified as an urgent humanitarian intervention over Kosovo – has resulted 15 years later in only 108 of 193 UN member states recognising Kosovo's independence.

Few nations today will recognise Crimea as part of the Russian Federation. That means endless disputes over commercial airspace and other issues. Resolution must therefore either be along the lines of Guantanamo, or a trade-off with Russia conceding on disputes over Georgia and Moldova.

Territorial disputes are solved usually after long, hard negotiations. Tit-for-tat sanctions are no substitute for nitty gritty negotiations and compromises. If all these boundary disputes are eventually settled then the way is paved for an agreement that there would be no further Nato enlargement – which Russia sees as encirclement – to Georgia, Moldova and Ukraine. In the meantime the EU is rightly going to improve its levels of support for those countries, and Nato has made confidence-building deployments in the Baltic states.