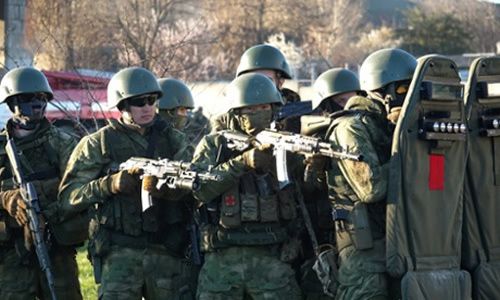 Russian forces gathering on the border with eastern Ukraine may be poised to invade, the White House warned on Sunday, as the government in Kiev said that the prospect of war with Moscow was continuing to grow after the annexation of Crimea.

“It's deeply concerning to see the Russian troop buildup on the border,” Blinken told CNN. “It creates the potential for incidents, for instability. It's likely that what they're trying to do is intimidate the Ukrainians. It's possible that they're preparing to move in.”

Thousands of Russian troops held a military exercise near the border even before Putin last week formally annexed Ukraine's southern Crimea region following a referendum – condemned as illegal by western governments – that endorsed unification with Russia.

General Philip Breedlove, Nato's supreme allied commander in Europe, said earlier on Sunday that the Russian military force gathered near the Ukrainian border was “very, very sizeable and very, very ready” and could even pose a threat to Moldova, on the other side of the country.

Andriy Deshchytsia, Ukraine's acting foreign minister, said the chances of all-out war between his government and Moscow “are growing”, adding: “The situation is becoming even more explosive than it was a week ago.”

Deshchytsia told ABC News: “We are ready to respond. The Ukraine government is trying to use all the peaceful diplomatic means … to stop Russians, but the people are also ready to defend their homeland.

“At this moment, when Russian troops would be invading the eastern region,” Deshchytsia went on, “it would be difficult for us to ask people who live there not to respond on this military invasion”.

Russian forces in the Crimean city of Belbek on Saturday aggressively seized a military base that was one of the last strongholds of the Ukrainian military in the region. Moscow, meanwhile, allowed civilian observers from the Organisation for Security and Cooperation in Europe (OSCE) to begin monitoring elsewhere in Ukraine.

Speaking from the Georgian capital, Tbilisi, Mike Rogers, the chair of the House of Representatives intelligence committee, said US intelligence officials were convinced “that Putin is not done in Ukraine”.

“It is very troubling,” Rogers told NBC's Meet the Press. “He has put all the military units he would need to move into Ukraine on its eastern border and is doing exercises. We see him moving forces in the south in a position where he could take the southern region over to Moldova.”

Nato officials are concerned that Putin could have designs on Transnistria, a restive Russian-speaking region in western Moldova also known as Trans-Dniester, where separatist leaders have demanded to be allowed to join Russia following the annexation of Crimea.

Breedlove, the Nato commander, said during remarks at an event held by the Marshall Fund thinktank that in the Kremlin's view, the region was the “next place where Russian-speaking people may need to be incorporated”.

“There is absolutely sufficient force postured on the eastern border of Ukraine to run to Trans-Dniester if the decision was made to do that,” said Breedlove, “and that is very worrisome.”

Pressed on whether Obama was managing to punish Putin, Blinken claimed that the Russian president had already seen “a real cost” economically, and that the US president would continue working to “bring the world together in support of Ukraine, to isolate Russia” on a visit to Europe next week.

“On all three of those areas Putin holds tremendous doubts, and we have extended those doubts.”

However, Rogers, a Michigan Republican, said “I don't think the rhetoric matches the reality on the ground” and called for increased US action in support of Ukraine to allow those potentially in Putin's sights to “protect and defend themselves”.

Asked if the White House would consider direct military aid, Blinken said: “All of that is under review.”

During the 2012 presidential race, Romney took criticism from Obama for saying Russia was America's "number one geopolitical foe" not al-Qaida. Now Romney has told CBS's Face the Nation that Obama's "naivete" and "faulty judgment" about Russia has led to a number of foreign policy challenges. Romney said the US should have worked sooner with allies to make clear the penalties that Russia could have faced if it moved into Ukraine.