Editorial: Hitler is dead; that seems certain. Even a superman would find it hard to survive so much slow Wagnerian music. 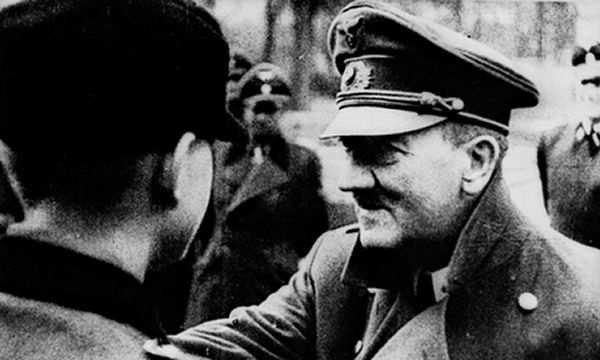 Hitler is dead; that seems certain. Even a superman would find it hard to survive so much slow Wagnerian music. But when and how he died who shall say? There is hardly room to doubt that we are present at the most interesting spectacle of the launching of a myth upon the world. For years everybody has been saying that the Nazis would try to turn Hitler dead to as much account as Hitler living. We now see them trying to do it. The German proclamation described the end thus:

It is reported from the Führer's headquarters that our Führer, Adolf Hitler, has fallen this afternoon [May 1] at his command post in the Reich Chancellery, fighting to the last breath against Bolshevism and for Germany.

Whether Hitler's body remains in the Chancellery we shall know when the Russians get there; it is quite likely they will find that it has been spirited away by the faithful for magical use later. But that Hitler died, as Dönitz says, "a hero's death" on May 1 is incredible. There is first the evidence of Count Bernadotte, who was told at Lübeck by Himmler and Schillenburg early on April 24 that Hitler had cerebral haemorrhage, was so ill that he might already be dead, and at any rate could not be expected to live more than two days longer. The date is important, for it was only a few hours after the first announcement to the world that Hitler was supposed to be in Berlin. This had come at noon the day before in the middle of a political wireless talk by Dr. Otto Kriegk:

From an appeal by the Gauleiter of the Reich capital, Dr. Goebbels, which has just become known, we know that the Führer is in Berlin. He has decided to remain, at this hour, in the Reich capital.

From that hour for the next three days Hitler's presence in Berlin dominated the German wireless. It was called a "rousing symbol," and the elaborations grew. On the 25th Dr. Josef Saal described how the Führer was himself actively directing operations along with Goebbels and "his closest military and political collaborators". But after the 26th, there was a significant change. The Führer dropped out of the news the closer the Russians got to the centre of Berlin. The trick had failed to keep them out.

He maintained, however, a shadowy appearance. As late as the evening of the 26th he was alleged to have given awards with his own hand to German heroes, but the propaganda speeches, and they were many, ceased to make reference to his inspiring example. The silence was significant and it continued (with a few routine exceptions like William Joyce) until the funereal music of May 1.