As Indiana Jones once said: "Nazis. I hate those guys. 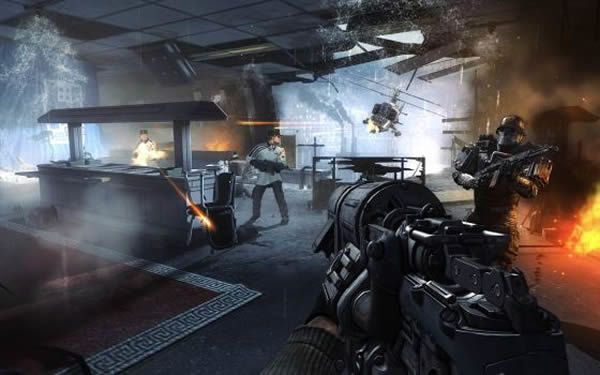 From classic World War II shooters like the original "Call of Duty" and "Medal of Honor" to this year's farcical "South Park: The Stick of Truth," Nazis have made dependable video-game villains. The trend dates back to 1981's "Castle Wolfenstein," an Apple II stealth game that invited you to infiltrate and then escape from a German stronghold.

"The New Order" begins with an assault on the headquarters of Nazi Gen. Wilhelm "Deathshead" Strasse. The mission is a disaster, however, and a comatose Blazkowicz ends up in a Polish asylum. Flash-forward to 1960, and the Nazis have taken over most of the planet and even a small chunk of the moon.

It's a bleak world that Blazkowicz wakes up to, filled with concentration camps and towering brutalist buildings where Deathshead and his countrymen conduct their experiments and build ever more powerful weapons. But a small band of resistance fighters is hiding deep in the sewers of Berlin, and they're ready to hit the Nazis where it hurts.

Blazkowicz's odyssey takes him across a well-realized variety of futuristic monstrosities. He sabotages a massive robot patrolling the streets of occupied London. He rescues a Jewish scientist from a bleak labor camp. Eventually he stows away on a German rocket and unleashes havoc on the moon base.

His tools are the usual assortment of pistols, machine guns and sniper rifles that show up in any first-person shooter, though a few more sci-fi weapons, like a wire cutter that morphs into a laser rifle, appear as the game progresses. There are a few scenarios that call for a more stealthy approach, but "The New Order" usually provides enough ammo and armor to blast your way through the hordes of soldiers, killer robots and vicious mechanical dogs.

The studio behind "The New Order," Sweden's Machine Games, gives occasional hints at something more subtle and ambitious. The freedom fighters are a well-drawn crew, each with his or her own history of trauma at the hands of the Nazis.

"The New Order" also tries to extrapolate from the already horrific atrocities — the mass executions, the eugenic experiments — of Adolf Hitler's regime. The results can be jarring. One minute, you're invited to reflect on man's inhumanity to man; the next, you're expected to relish splattering enemy brains all over their swastika-festooned fortresses.

That doesn't mean that sort of thing can't be fun, and "The New Order" is so well-designed and expertly paced that it never gets dull during its 16-hour duration. I only wish it was a little bit smarter. Three stars out of four.