Some festival-goers chose to flout a ban on Nazi uniforms at the annual 1940s-themed weekend in Haworth, West Yorkshire 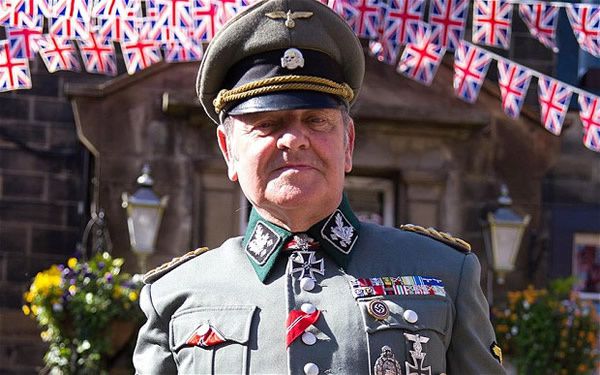 Mike Reid wears a relica Nazi uniform, similar to that of German General Sepp Dietreich, who was in charge of the Panza division, during Haworth 1940s Weekend

For Second World War enthusiasts, it's one of the highlights of the year.

But the annual 1940s-themed weekend in Haworth, West Yorkshire has found itself mired in controversy yet again after a group of visitors arrived dressed in SS uniforms.

For the third year running, festival-goers were confronted with a small group of revellers who chose to flout guidelines on Nazi uniforms.

Those commemorating the heroics of those involved in the Second World War were horrified to find some villagers donning swastikas and other Nazi regalia. Stephen King of the Soldiers', Sailors' and Airmen's Families Association armed forces charity revealed shops in the village had put up signs saying they wouldn't serve anyone wearing Nazi or SS uniforms after similar incidents in previous years.

Yet, despite their efforts, some visitors still chose to dress up as members of Himmler's death squads.

Mr King said: "We can't actually ban people from wearing these outfits but it's something we always discourage.

"Many people lost their lives in the Second World War and the last thing we'd want is for those people to be mocked or disrespected in any way.

"A lot of the shops in the village put up signs saying they won't serve anyone wearing Nazi or SS uniforms.

"We also seek guidance from the police to make sure it is discouraged but unfortunately it isn't something we have control over.

"We just urge people not to do it but unfortunately some people feel the need to wear such costumes."

Signs at several shops and pubs in the village warned 'No Nazi or SS uniforms or insignia allowed on these premises'.

Some visitors to the village, near Bradford, were seen wearing garments from SS uniforms – the Third Reich paramilitary organisation responsible for many of the atrocities against humanity in the Second World War.

Cafe owner Jill Ross revealed she put up a sign warning people not to enter in Nazi or SS costumes as many visitors were left offended at a previous event.

She said: "A couple of years ago we had people in SS and Nazi uniforms in the café and a lot of people were upset.

"We put the sign up as have many others in the streets around here asking for people to refrain from wearing these outfits."

Another visitor, who asked not to be named, said: "It's incredibly insensitive.

"There are people here today that were alive during the War and don't want to remember such things.

The event attracts around 25,000 to 30,000 guests each year, with this year's festival commemorating the 70th anniversary of the 1944 D-Day landings.

Organisers admitted there is no law against wearing the uniforms, meaning it is "impossible" to impose an outright ban on the costumes.

They are hoping to raise more than £25,000 at the two-day event, with proceeds going toward the armed forces charity.