Bernard Jordan's flight from a Hove care home made headlines last week, but what did it say about the way we regard old people? 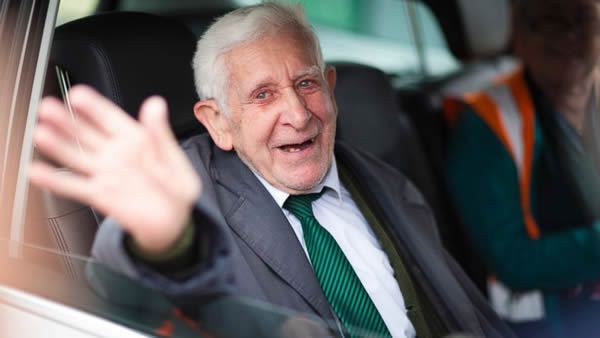 Some of the greatest wartime dramas involve a daring escape; plucky soldiers making a break for liberty to rejoin their comrades on the battlefield. It's regarded as a very British trait, this refusal to relinquish our freedom without a fight.

Perhaps this is why, among all the moving acts of courage that were revisited during the D-Day commemorations last week, we have been so delighted by the exploits of 89-year-old Bernard Jordan, who 'broke out' of his care home and escaped to Normandy so that he could honour the anniversary alongside his comrades.

What appeals about this story is that it involves an act of defiance and appeals to our sense of justice. Mr Jordan had allegedly been told by his carers at The Pines in Hove that he could not attend the celebrations in Normandy, so he sneaked out anyway, medals hidden under his coat, and boarded a ferry, where he was rumbled. Even the Brighton police chief superintendent, whose officers had been searching for Mr Jordan after he was reported missing, tweeted about how much he loved the story.

It's all very Dad's Army; no doubt there's already a bidding war over the rights to turn it into a comedy drama. Even as it was being reported, broadcasters were calling it "a script waiting to happen": Mr Jordan's Grand Day Out, perhaps.

Old people behaving like naughty children are always a reliable source of comedy gold and perhaps the story has caught the nation's imagination because it offers a bit of light relief among the grimmer memories. It's an easier way for us to engage with the idea of D-Day than to try and imagine what Bernard Jordan and his fellow veterans experienced as young soldiers in Normandy 70 years ago. Not much comedy there.

The tabloids have relished descriptions of his great escape as embodying the pluck and spirit of 1944; you might think there'd be a pause for thought about the aptness of the comparison, but maybe we are so far from being able to picture what those soldiers went through that this is our best hope of connecting with those events.

Bernard Jordan's cheeky trip is, without doubt, a heartwarming story, but it also says something about the way we regard old people. There's more than a whiff of condescension in the way he has been portrayed in some of the reports; a hint of "ah, bless" in the responses of those who met him on his journey.

Still, a society that increasingly marginalises the elderly is nevertheless delighted and entertained when one of them shows they still have a bit of spark. Perhaps we love this story because we are all afraid of old age, of the idea of being confined to a nursing home where, little by little, your liberty shrinks to the size of a room, or a chair. Defiance, grit, camaraderie and a bid for freedom in the face of decline – what could be more British or inspiring than that? I'm looking forward to the film already.