She led the struggle for equal votes for women and was repeatedly imprisoned for using violent tactics - but how much do you know about Emmeline Pankhurst? Suffragette: Emmeline Pankhurst led the fight for votes for women

Today's Google doodle celebrates the 156th birthday of Emmeline Pankhurst, the leader of the British Suffragette movement who fought for women's right to vote.

She was a controversial figure and was repeatedly imprisoned for using violent tactics in her struggle for equality.

Disillusioned with the women's political groups of the time, she founded the Women's Political and Social Union, which became a formidable force in British politics.

Pankhurst was named one of Time Magazine's 100 Most Important People of the 20th Century in 1999, but how much do you know about her?

1. She was born and raised in Manchester According to the register of births, Emmeline Goulden was born in Moss Side, Manchester on July 15th, 1858.

She always claimed to have been born on July 14th, Bastille Day - though it's possible she chose that date, which marks the start of the French Revolution, because of its resonance with themes of equality.

2. She was educated in France Equality: Pankhurst's teachers insisted on girls being educated in the same way as boys

Emmeline was sent to École Normale Supérieure, a finishing school in Paris in 1873.

In her autobiography, My Own Life, she wrote: "The school was under the direction of Marchef Girard a woman who believed that girls' education should be quite as thorough as the education of boys.

"She included chemistry and other sciences in the course, and in addition to embroidery she had her girls taught bookkeeping. When I was nineteen I finally returned from school in Paris and took my place in my father's home as a finished young lady."

3. Her husband was a radical liberal lawyer In 1879, at the age of 20, she married Dr Richard Pankhurst, a liberal lawyer 24 years her senior. Dr Pankhurst was a socialist and a supporter of radical causes, including women's rights who had a place of great respect in the Independent Labour Party.

The couple were part of a political circle which included Keir Hardie, Annie Besant, William Morris and George Bernard Shaw.

4. She founded the Women's Social and Political Union WPSU: The organisation gained a reputation for violent action

The WSPU was a women-only group dedicated to practical activism dedicated to obtaining equal votes for women.

It was not affiliated with any political party - and frequently opposed them.

5. Her daughters were heavily involved in the movement Artist: Sylvia Pankhurst was an artist and activist

Emmeline and Richard's eldest daughter, Christabel, became a leading member of the Women's Social and Political Union. In 1905, she became one of the first suffragettes to be imprisoned, after interrupting a Liberal Party meeting by shouting demands for votes for women.

She and Annie Kenney refused to pay a fine, and were tried and sent to prison. The trial created much interest in the movement, and membership of the WSPU increased as a result.

Following her daughter's arrest, Emmeline began to take more militant action and was imprisoned a number of times.

Younger daughter Sylvia was an artist and suffragist and communist activist, who designed many of the WSPU's posters and banners.

6. She was imprisoned and went on hunger strike In 1910, Pankhurst led a march on Parliament of more than 300 women. They were met with an aggressive and violent police response - ordered by then-home secretary Winston Churchill - in which officers punched protesters and "pulled on women's breasts". Prime Minister Asquith refused to meet with her.

When it looked like a "conciliation bill" on women's suffrage would be derailed, Pankhurst was involved with a campaign of window-smashing. The Police raided the WPSU offices and arrested Pankhhurst, who was convicted of conspiracy to commit property damage.

She was imprisoned in Holloway, where she went on hunger strike and was force-fed by officers.

7. Emmeline and Christabel halted their activism during the First World War 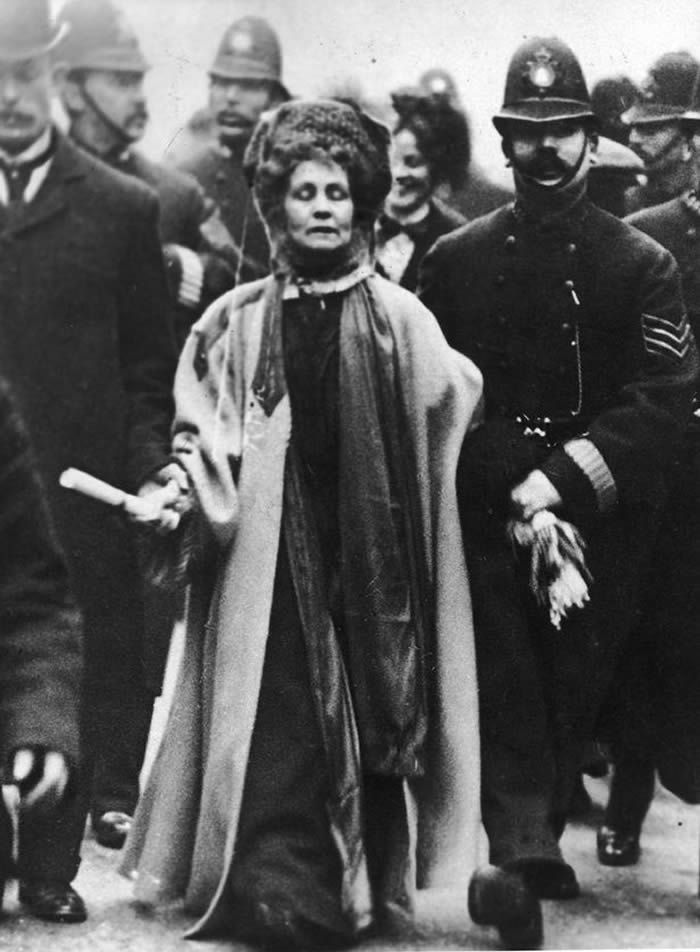 As leaders of the WSPU, mother and daughter called an immediate halt to militant suffrage activism on August 4th 1914, two days after war broke out.

The government agreed to release all suffragettes from prison, in return for the group focusing on helping the war effort.

In 1915, the WSPU changed their newspaper's name from The Suffragette to Britannia, to reflect the organisation's new patriotic focus.

8. After the war, votes were granted to (some) women. Suffrage: Votes for (some) women were introduced in 1918

The Representation of the People Act 1918 extended the vote to all men over 21 and women over 30 who were property owners or graduates voting in a 'university constituency.'

The difference between men and women in this law was introduced to prevent men becoming an electoral minority following the huge loss of life in the Great War.

9. In later years she joined the Conservative Party 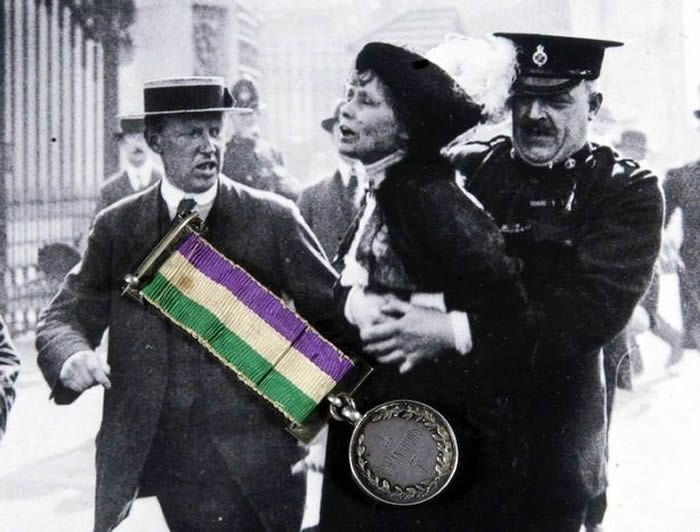 In 1926, Pankhurst joined the Conservative Party and was selected as a candidate for Parliament in Whitechapel and St. George's in 1928.

She said: "My war experience and my experience on the other side of the Atlantic have changed my views considerably."

But many historians believe this move was part of a strategy for pressing further towards equal votes. The Conservative party had a large majority after the war, and the Tory government would later make equal votes a reality.

10. She died just weeks before equal voting rights for women was passed by parliament Emmeline Pankhurst died at the age of 69 in a Hampstead nursing home on June 14th 1928.

It meant that women had to be over 21 years old to vote, regardless of property ownership.