Though she sang but one season and one role at New York’s Metropolitan Opera—Hänsel, in the company’s first staging of Humperdinck’s Hänsel und Gretel (premiere: November 25, 1905) 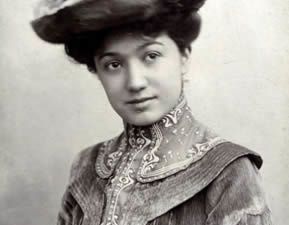 Lina Abarbanell’s place in American opera was secured when Leonard Bernstein dropped her name in the scat chorus of his one-act Trouble in Tahiti. This opera is dedicated to fellow composer and mentor Marc Blitzstein, who had married Abarbanell’s daughter Eva in 1933. After becoming the best-known exponent of Viennese operetta style in America, Abarbanell made an effective transition to American theater, contributing to it every talent for which her thorough European training had prepared her.

Lina Abarbanell was born on January 3, 1879, in Berlin, Germany, to Paul and Marie Abarbanell. A descendant of an eminent Sephardi family, Paul Abarbanell was a leading theater conductor. His daughter first sang in public at the age of seven. She later received both dramatic and vocal training, and appeared in numerous civic theaters in Germany. At fifteen, Abarbanell made her debut with the Berlin Court Opera, where she sang the role of Adele in Die Fledermaus over a hundred times. She performed all over Europe and gave command recitals before Austrian, Bavarian, and Persian royalty.

Abarbanell’s success lay in lighter musical fare and operetta. Composers such as Oscar Straus, Franz Lehár, and Edmund Eysler wrote for her expressive soubrette voice. She made about twenty recordings in 1903 and 1904, only four of which appear to have survived. In 1905, Heinrich Conried, general manager of the Metropolitan Opera, invited her to sing the role of Hänsel and to perform at his Irving Place Theater, where she delighted his German-speaking audiences.

After that season, Abarbanell and her husband, journalist Eduard Goldbeck, settled in America with their daughter Eva (b. 1901). For a time she flirted with Christian Science; from a Jewish point of view she can be considered totally assimilated.

Abarbanell toured the country for almost thirty years, singing her way though frothy Viennese-inspired confections such as The Geisha, Madame Sherry, The Red Canary, The Silver Swan, Flora Bella, The Grand Duke, Enter Madame, and The Student Prince. Sheet music publishers placed her photograph on the covers of numbers such as “Every Little Movement Has a Meaning All Its Own,” which she had popularized. Her greatest triumph came in the role of Hanna in Lehár’s The Merry Widow, which she played for weeks on end, the press doting on her at every turn.

Abarbanell stopped singing in 1934 after the death of her husband, but she did not leave the theater. She became a well-known casting director, Broadway producer, and occasional director, for years as partner to Dwight Deere Wiman. Among the shows she cast were I Married an Angel, Street Scene, the famous Porgy and Bess that toured the world in the early 1950s, and the film version of Carmen Jones.

Lina Abarbanell continued working in the theater almost until the day she died, on January 6, 1963.