Nazi hunters in Germany are on the trail of 17 more former S.S. guards who worked at the death camp of Majdanek in occupied Poland during the Second World War.

Four women are among the suspects said to have helped herd innocent victims into the gas chambers - or who were part of mass shooting parties - which claimed the lives of between 80,000 and 150,000 people, most of them Jews.

Majdanek was a hybrid facility which also served as a concentration camp and a source of slave labour. 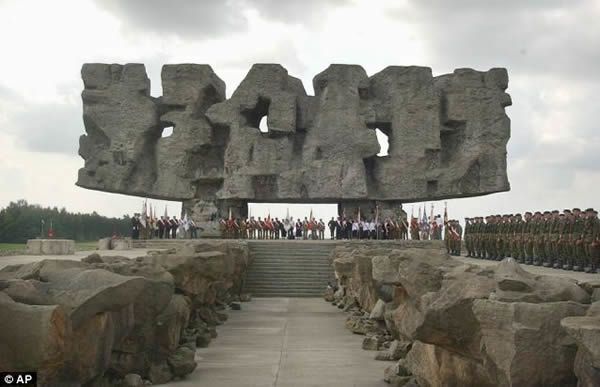 Located on the outskirts of Lublin in eastern Poland, it was liberated by the Red Army in July 1944 and remains the best preserved Holocaust site with intact gas chambers and crematoria.

Germany’s Central Investigation Agency for Nazi War Crimes recently tracked down several Auschwitz camp guards in the country and handed files over to various regional prosecutors who are now mulling charges against them. Auschwitz was first constructed to hold Polish political prisoners, who began to arrive in May 1940. The first extermination of prisoners took place in September 1941

Kurt Schrimm, the director of the agency based in Ludwigsburg, wants to level charges of complicity in mass murder against the Majdanek guards.

Files on three of the suspects have already been handed to prosecutors with Schrimm admitting: 'The evidence is somewhat problematical.'

By that he means that there remain no witnesses alive able to testify to the alleged crimes committed by the guards. But he hopes that the case of John Demjanjuk will serve as the blueprint in any forthcoming trials.

Demjanjuk was convicted of assisting in the mass murder of 28,000 Jews at the extermination camp of Sobibor, where 250,000 of the six million victims of the Holocaust were murdered. John Demjanjuk (in the wheelchair) was convicted of war crimes without any evidence or testimony against him. Judges decided that it was enough that he had served as a guard at Sobibor concentration camp. He died on March 17, 2012

He was convicted in Munich in 2011 without a shred of testimony about what he did in the camp: judges ruled for the first time that it was enough for him to have have served there for him to be guilty of aiding the Nazis in their criminal enterprise.

Schrimm went on: 'Majdanek is a very complicated camp and for us because there were no demarcated areas for the killings as in other Nazi camps.'

Indeed research is continuing at the site of the camp - now a memorial and museum - to try to ascertain the correct numbers of those murdered there.

'We have little material, the information we have is not optimal,' admitted Schrimm,.

Age and infirmity could mean that some, perhaps all, of the S.S.killers from Majdanek will not be brought to trial.

Of the recent Auschwitz suspects rounded up with the help of the Nazi hunters of the Simon Wiesenthal Centre in Israel, nine have been judged incapable of standing trial, four were let go because of lack of evidence, four more have since died, one was released because he had already served time for war crimes in Poland and 14 more cases are still being considered by public prosecutors across Germany.