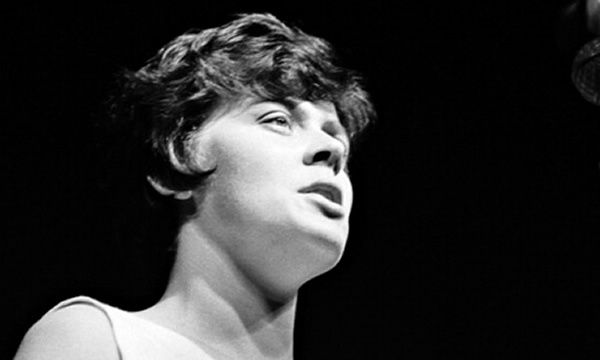 The Scottish folk singer Jean Redpath, who has died of cancer aged 77, was best known in her native country through her recordings, especially of the songs of Robert Burns. It was in the US, however, that she established her reputation as a wonderful interpreter of Scottish folk songs, in live performance, on radio and on record.

Born in Edinburgh, Redpath grew up in Leven, Fife, and chose medieval studies at the University of Edinburgh. It was there that she discovered the rich archives of the university's school of Scottish studies – and the poet and folklorist Hamish Henderson, whose name was synonymous with the work of the school. Henderson had recorded ballads by Traveller singers such as Jeannie Robertson and Belle Stewart, ensuring that they remained a vibrant part of Scottish culture during the emerging folk music revival. Redpath was inspired by the recordings that Henderson was making, and spent many hours listening to and absorbing the repertoire and style of these traditional singers.

Like her near-contemporaries in Ireland, the three Clancy brothers and Tommy Makem, Redpath made the journey to America, where she found herself much in demand as a folk singer. This was 1961 – just as folk music was becoming a commercial success in the US – and Redpath attended the Berkeley folk festival in California that year. At a panel discussion, the unknown singer asked several questions and, after it became apparent that she knew more about Scottish folksong that anyone else, she was invited on stage to join the panel.

She moved to Philadelphia and then gravitated to Greenwich Village, New York, the centre of the grassroots and alternative-lifestyle folk scene. Here she met Ramblin' Jack Elliott and shared a house, and concert stages, with the young Bob Dylan. After an appearance at the club Gerde's Folk City, she received a rave review in the New York Times, and her career was launched.

Almost immediately, she was recording albums of Scottish songs, and invitations to perform took her throughout the US and Canada, and later to Australia and South America. Her first album was Skipping Barefoot Through the Heather (1962) for Professor Kenneth Goldstein's label in Philadelphia. She then signed to Elektra Records, and later to Philo, both based in the US. In all, she recorded over 40 albums, latterly on her own label.

Redpath's best-known recording project was the songs of Robert Burns. The composer Serge Hovey had compiled a book of 323 of Burns' songs – both traditional songs and those written by Burns – and then wanted to record them. Henderson recommended Redpath as the singer and, from 1976, she and Hovey worked for 20 years, until his death in 1989, recording just a selection of the songs on seven out of the projected 22 albums. Hovey's arrangements were highly orchestrated and he was a perfectionist – hence the incomplete recordings, which were critically acclaimed around the world. Redpath's beautiful, expressive voice – perhaps not as earthy as the traditional song enthusiasts might have liked – was well suited to Hovey's arrangements. Although she felt that no other musician could replace Hovey in the project, Redpath nevertheless recorded a further four albums of Burns songs in Scotland, singing a cappella.

In the 1970s and 80s, Redpath was a regular guest on the American radio show A Prairie Home Companion, presented by Garrison Keillor, which brought her singing to millions. Here, as in her concert performances, she endeared herself to audiences with her sweet voice, witty introductions to songs and great knowledge of their background.

In 1972, Redpath was appointed artist in residence at Wesleyan University in Middletown, Connecticut, and in 1979 she took a similar role at Stirling University in Scotland and was a staff member at the annual Heritage of Scotland summer schools there, giving courses in Scottish song for the next 10 years. In 2011, she was artist in residence in the department of Celtic and Scottish studies at Edinburgh University, bringing her full circle to the archive that had so interested her 50 years earlier.

The respect for Redpath's singing was recognised by honorary doctorates from the universities of Stirling, St Andrews and Glasgow, and from the Royal Scottish Academy of Drama and Art (now the Royal Conservatoire of Scotland). She performed at a royal banquet for the Queen in Edinburgh Castle during the silver jubilee year, 1977, and was appointed MBE in 1987. She was inducted into the Scottish Traditional Music Hall of Fame in 2008. In the US, she was made a Kentucky colonel by the state governor.