Peter Bradshaw: Bacall - smart, sexy and tough - escaped a career as a studio-created construct by beating back stage fright and acting beyond her years. Lauren Bacall — tough, smart, sexy — began her career as a studio-created construct, and that iconic toughness was the paradox which shaped her career. The toughness was conferred upon her in the great roles given to her in the glorious early movies with Bogart, and then she had to show real toughness in standing up to the studio system, turning down dumb roles, and going on suspension, and then challenging McCarthy-ism in the 1950s. Her legendary marriage to Humphrey Bogart itself fused toughness in both fact and fiction. It was a kind of strategic alliance, she publicly absorbed some of his fictional toughness (although the real Bogart was a much more sensitive soul than audiences were permitted to discover) in that sensational marriage that the studio loved and feared, a publicity-bomb that threatened to make their star difficult or uncooperative.

Bacall seems so unique now that it is strange to think that she was marketed initially as a Veronica Lake figure, a recognisable persona: the gorgeous, lustrous curtain of hair and husky, low voice proclaimed sex while her elegant dress sense made her what Hollywood insiders called a “movie fashion plate”: someone whom women viewers were encouraged to admire, imitate and sympathise with. 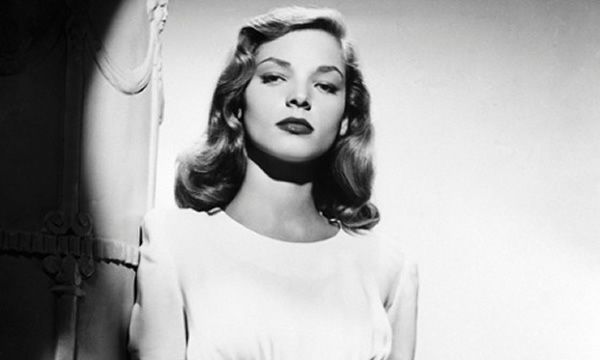 Her career often looks as if she went straight from young romantic lead to grande dame, and to a certain extent that is what happened. She at any rate had a second act to her Hollywood life, while figures like Irene Dunne or Loretta Young vanished into obscurity. It is incredible to think that she was just nineteen when she made that extraordinary debut in To Have And Have Not (1944), acting opposite Humphrey Bogart in such a way that she appears to be ten years older — the same age as Bogart, or even older. She looks as if she is telling him he has found his soulmate, or at any rate his match, a different proposition to the young floozies with whom he might been dallied until that point. Again, she is very much a studio product, a way of styling which could plausibly turn teenagers into simulacra of impossibly worldly women — although this faintly abusive process took its toll on the human beings that underwent it. Bacall confessed that however wiseacre and cool she appeared, she shook with nerves on set and suffered from recurrent stage fright for the rest of her life.

Gore Vidal’s Myra Breckinridge famously proclaimed that “in the decade between 1935 and 1945, no irrelevant film was made in the United States”. Certainly, that scene between Lauren Bacall and Humphrey Bogart is irresistibly relevant: he is Harry “Steve” Morgan, a world-weary but fundamentally decent American fishing-boat captain in Vichy France who is somehow inspired to help the Resistance through his encounter with the impossibly sexy American woman Marie “Slim” Browning — Bacall. Their dialogue is drenched with apparent significance, pointing to all sorts of hidden meanings about American sexuality and interventionist potency and how women might just be able to imagine a more independent existence in postwar America. She says to him: “You know you don’t have to act with me, Steve. You don’t have to say anything, and you don’t have to do anything. Not a thing. Oh, maybe just whistle. You know how to whistle, don’t you, Steve? You just put your lips together and... blow.”

It is of course the older man’s prerogative to teach the submissive younger woman in the ways of love. Bacall (along with credited screenwriters Jules Furthman and William Faulkner) is undermining that. The movies famously used the business of cigarettes to hint at sexual contact and oral pleasure. Whistling is a witty new angle on that. David Thomson brilliantly suggested that Lauren Bacall’s “whistling” line is a quasi-blowjob. And it is so subversive and outrageous because she is not merely giving it, but teaching him how to give it. Bacall’s superb screen presence should have made a formidable force in comedy, but perhaps the times required something too simperingly fragile in their comediennes. She is a cool customer in How To Marry A Millionaire (1957), playing one of a trio of gold-diggers, along with Marilyn Monroe and Betty Grable. But she always looks as if the whole idea of just bagging a rich husband is beneath her, and she actually plays a divorcée (“I had one of those divorces you don’t read about: the wife finished second.”) Lauren Bacall looks like the kind of woman who is independently wealthy, through being something like a foreign correspondent or elephant hunter. Men should be queueing up to marry her.

After a career which took in well-regarded stage work as well as the movies, Bacall crafted a line in supporting roles which drew on her formidable reputation, such as her award-winning turn as Barbra Streisand’s overbearing mother in The Mirror Has Two Faces. Earlier, in Sidney Lumet’s all-star Murder On The Orient Express, she was murder suspect Mrs Hubbard, a wealthy American abroad, yammering and clamouring and barking out imperious orders, facing off against Albert Finney’s Hercule Poirot, whose regulation sly courtesy seems to dissolve into querulous irritation in her presence. There is no romance here. She is mannish, assertive — and wealthy.

Lauren Bacall had the star quality that was partly taught by the studios: the walk, the business with drinks and cigarettes, the crisp despatch of dialogue. But she also had a natural hauteur, a natural queenly sexiness. Watch her great movies today: To Have And To Have Not or The Big Sleep, and you find that allure is as strong as ever.