Hollywood created the expectation that women should be beautiful, young and vulnerable – to the loss of youth and beauty, if nothing else. Lauren Bacall … resisted the studio system’s attempts to shape her

Whatever special qualities Lauren Bacall had, you can't help wishing that the world had more of them. She died on Tuesday, aged 89, of natural causes, after what seems to have been a satisfying life – which for someone of her background was remarkable.

A high-flying teenage model – Vogue, Harper's Bazaar – before she moved into acting, Bacall was signed up by Howard Hawks at 19 and groomed for film stardom, which, of course, she achieved. That may be the stuff of dreams. But it is also a standard recipe for troubled living and dying. Not for Bacall, though. She just appears to have handled it all, remaining both an iconic star and a well-adjusted person getting on with her life. She didn't even play the "I'm a well-adjusted person getting on with my life" card, living as she did in the Dakota hotel, New York, like a star.

I interviewed her years ago – supposedly. I can't remember what the interview was meant to be plugging, because we just talked, like we'd met in the pub and hit it off. Big stars like her quite often had PR people sitting in on interviews or hovering in the next room, in case either star or journalist strayed into unwelcome areas. There was no need for that with Bacall. She was so good at being herself that you just entirely forgot what a big deal that self was in minutes. We hadn't really "hit it off", of course. It wasn't like we became pen pals. She was just great at controlling interviews – subverting them, really. Being a star and at the same time disassociating herself from stardom.

Miriam Krule, a beady-eyed contributor to the US website Slate, has noted that with the death of Bacall, "the 16 icons name-dropped in Madonna's Vogue are now all dead". Without putting too fine a point on the significance or otherwise of this particular list, there really is a sense that Bacall's death marks the end of something – the end of orchestrated, ultra-glamorous, studio-system Hollywood. If so, there's something grand in the idea that the last survivor of that era was also the one who let it shape and define her the least.

But golden-age Hollywood shaped and defined so much else. Technology had exploded as a means of facilitating the mass-marketing of culture; of creating popular culture really, as opposed to folk culture, from which the jazz age came. Hollywood aimed to dazzle passive audiences and control them, portraying an establishment fairy-tale world that the masses would quietly consume, in their seats. 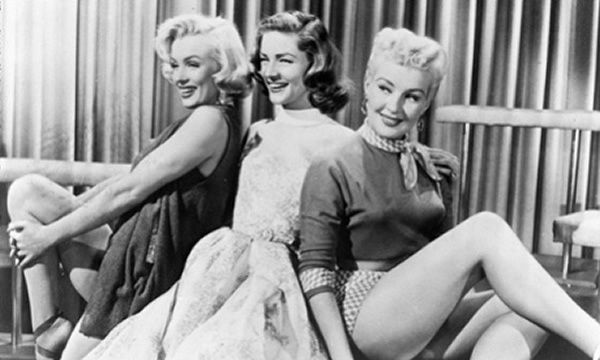 During that era, virtually all of popular culture was made in Hollywood's image, which was aggressively white and morally repressive, purveying simple morality tales in which the good people triumphed and the bad people met their downfall. In general terms, that ambitious and artificial edifice began to collapse quite quickly. Elvis Presley's stubborn involvement with Hollywood may have suffocated his own career but the king of rock'n'roll kickstarted the rise of youth culture, with its emphasis on individualism. The assertion of personal star power and the demise of the studio system was part of that, too. In some ways, it's all come full circle, as technology has advanced to the point where mass-market creativity is back – or at least gives the impression of being back – in the hands of the people, who, when they are not reviewing, critiquing, making and sharing culture, are going to see it, either live or at a place and time of their own choosing. There is a lot, of course, to choose from.

Back then, there wasn't, and Hollywood was able to dictate the terms under which mass culture spread its values and influence. While that position may not have remained absolute for long, it retains a strong influence to this day, most apparently in the grip it has over ideas of glamour. It created a certain kind of glamour – wonderful but dangerous; its possessor having the power to attract, but not the power to control what or who was attracted. The idea that glamour is a mask for vulnerability has potency to this day. So the most tragic among Hollywood's icons – Marilyn Monroe and James Dean – are the ones who remain most alive, most present in contemporary culture.

Monroe and Dean both make Madonna's list, unsurprisingly. Also unsurprisingly, the list is largely female.  Women didn't dominate many things in the early part of the 20th century, but – pale-faced, pale-haired, meticulously dressed, draped and groomed – they did dominate glamour.

Even a star of Bacall's stature faded as her glamour dimmed. She found that her career, post youth, just didn't develop in the way that the careers of her male colleagues did. She still got some film roles, she did stage work, and she wasn't above doing promotional work. But she was not immune to the structural limitation of female glamour, which is that as it grows older, there are few positive roles for it.

So Bacall found herself touring the world in the 1980s, as Alexandra in Tennessee Williams's Sweet Bird of Youth – a fading actress playing a troubled, faded movie actress, whose main problem was that she was faded. Which was another problem Bacall didn't have. She was fond of declaring: "I think your whole life shows in your face and you should be proud of that."

Contemporary female actors will, of course, confirm that the lack of roles for older women is an enduring problem. But it's interesting to note how firmly the tone had already been set in Bacall's day. Many of the controlling aspects of that golden age couldn't be sustained, and fell away. The racy and messy aspects of the lives of many Hollywood greats were sensationally exposed in Kenneth Anger's Hollywood Babylon book, igniting a tabloid celebrity culture that would eventually become criminally obtrusive. And the McCarthyite witch-hunts of the 1950s can clearly be seen as an ill-judged and ultimately unsuccessful attempt to get Hollywood firmly back under establishment control. Bacall, with her then-husband Humphrey Bogart, was mixed up in this herself, first standing with Hollywood colleagues accused of being communists, then taking pains to emphasise that they most certainly were not communists themselves. Yet, despite so many other liberations, the status of women in Hollywood has been comparatively untouched.

Hollywood retains great power and influence in the film and television industry, of course, and that's acknowledged, often bemoaned. But its power has long since stopped being monolithic. It absorbs and responds to many other cultural influences itself, and has to, to stay on top.

Even so, I wonder if it's entirely understood how completely those early days of Hollywood created a template that still dominates ideas about glamour. Pretty much all of that early propaganda about gender, especially the expectation that women in the public eye should be glossily beautiful, should be young and should be vulnerable – to the loss of youth and beauty if nothing else – is current, still highly contested, still damaging to women; and also, as a consequence, to men. Bacall lived and died in defiance of all of that, even as she took part in it. She remains an icon of much beyond Hollywood glamour, and always should.