My mother, Delia Ruhm, who has died at the age of 89, was a flautist with a number of leading British orchestras and chamber music ensembles. 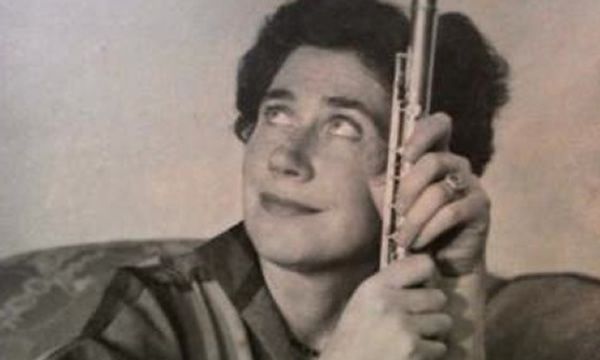 She was born in Berlin to Jewish parents. Her father, Ernst Ruhm, was a lawyer and her mother, Hilde Isaac, was a well-known soprano in Germany who, when the family moved to Britain, regularly broadcast and gave recitals.

Delia attended a Rudolf Steiner school in the German capital, but when Adolf Hitler forbade the education of Jewish children she was sent to an international Quaker school in the Netherlands. She arrived in Britain in 1939, continued her education at the Perse school, Cambridge, but left when she was 16 to earn a living and help support the family. Although always determined to be a flautist, she worked at the Cambridge public library, and in London at the libraries of Simmonds Aerocessories and the Warburg Institute. She then obtained a scholarship to the Royal Academy of Music.

At the start of her career, she freelanced in London, playing with the Boyd Neel Orchestra and as a founder member of the Chelsea Opera Group, conducted by the young Colin Davis.

Although it was rare at that time for women to be members of wind sections she joined the Scottish National Orchestra and later the BBC Scottish Orchestra as principal flute.

After a very enjoyable period in Glasgow, Delia and her husband Harlan Walker and their young family settled in Birmingham, where she became one of the leading freelance woodwind players in the Midlands. She was principal flute of the Orchestra da Camera for more than 30 years and played with the City of Birmingham Symphony Orchestra, the Midland Light Orchestra, the Royal Shakespeare Company, the English Symphony Orchestra, Ex Cathedra and many other groups.

She was principal flute of the Birmingham Bach Society and played in the opera productions at the Barber Institute under Anthony Lewis and Ivor Keys, as well as in the Aulos Trio with the oboist David Cowsill and pianist Marigold Pickerill, and the Delphos Ensemble. She also gave many solo recitals, and particularly admired Mozart.

For many years she taught at Birmingham School of Music, at King Edward's school, and privately. Over the years, she and Harlan, to whom she was married for 60 years, were great supporters of music and musicians in Birmingham. Their house was a celebrated place of hospitality, with fabulous home-cooked food for visiting musicians.

On retiring, Delia carried out voluntary work, first as a Samaritan and most recently volunteering for Acorns, the children's hospice in Birmingham.

She was made an associate of the Royal Academy of Music in 2001 and awarded a Birmingham Conservatoire honorary fellowship in 2002.

Delia is survived by Harlan, my brothers, Philip and Ben, and me, and seven grandchildren.