It’s no secret by now that during World War II, Coco Chanel was spying for the Germans while carrying on an affair with Baron Hans Gunther von Dincklage, the dashing, flaxen-haired, and considerably younger Nazi spy. Hal Vaughan’s new book, Sleeping with the Enemy: Coco Chanel’s Secret War (Knopf), documents the couturière’s wartime escapades in detail. Blanche Auzello in the 1940s Her lifelong nickname for Claude was “Popsy” on account of the fact that his heart went “Pop!” the very first time he set eyes on her.

But what is lesser known is that at the same time Mlle Chanel was enjoying Teutonic favors in her sumptuous suite of rooms at the Ritz in Paris, there was another prominent occupant of the storied hotel; a New York native named Blanche Auzello, whose Jewish identity and life-threatening exploits on behalf of the Resistance were kept under wraps throughout the German occupation. An astonishing fact considering the Ritz was headquarters for the Luftwaffe and this hotel denizen was surrounded day and night by high-ranking Nazi officials including Hermann Goering, the head of the German air force. Blanche Auzello (née Rubenstein) was the wife of the long-reigning Managing Director of the Ritz, Claude Auzello. In June of 1944, when the Allies had invaded France, this spirited, long-legged former actress thought the danger of her identity and her anti-German wartime activities coming to light, had passed. She had just finished celebrating D-Day and making plans for a post-war future with her good friend and fellow Resistance-member, Lily Kharmayeff at Maxim’s – in and of itself an act of defiance as the fashionable restaurant was still very much a Nazi stomping ground – when she was taken away by the Gestapo. The Ritz on the Place Vêndome, Paris. Coco Chanel’s bedroom at the Ritz.

Blanche Auzello (née Rubenstein) was the wife of the long-reigning Managing Director of the Ritz, Claude Auzello. In June of 1944, when the Allies had invaded France, this spirited, long-legged former actress thought the danger of her identity and her anti-German wartime activities coming to light, had passed. She had just finished celebrating D-Day and making plans for a post-war future with her good friend and fellow Resistance-member, Lily Kharmayeff at Maxim’s – in and of itself an act of defiance as the fashionable restaurant was still very much a Nazi stomping ground – when she was taken away by the Gestapo.

Shackled to a dozen other men and women in ankle chains, she was transported by truck to Fresnes, the prison on the outskirts of Paris notorious for being the first stop en route to German labor camps, or worse. There, she was given a dirty robe and wooden shoes to change into and shoved into a room where her friend Lily was standing against a wall, her feet and hands bound by metal cuffs. Before she could restrain herself, Blanche ran to Lily and hugged her. Her friend was briskly taken out of the room and Blanche would never see her again. Blanche Auzello in the 1920s. She met her husband, Claude, on her very first day in Paris in 1923 at the age of 25. She had joined her friend, silent film star Pearl White, on a first class trip to France. Claude was the Assistant Manager at their hotel, the Claridge. Claude Auzello as a young gunner during World War I. His esteemed command of 600 men earned him the Legion of Honor.

For the first time since the war started, Blanche was scared. She hadn't wavered when she accompanied a badly wounded British Air Force gunner from his hiding place near the Ritz across a swath of Paris in broad daylight to a waiting barge on the Seine, all the while posing as a German nurse to a young Nazi soldier. Nor flinched when asked by Lily’s boyfriend to deliver microfilm to a French railway worker with photographs of stolen documents showing German gun emplacements along the Atlantic coast. But now, Blanche had reason to fear for her life.

She knew her cover as a Catholic hadn’t been blown because her first visitor was a priest. Blanche had falsified her passport some twenty years before upon the discovery that at the time, the Ritz had a quota for Jews. Because she didn’t want her Jewish identity to hinder her husband’s career, she changed her last name to Ross, her birthplace to Cleveland, and her religion to Catholic (and shaved four years off her age for good measure).

A corridor at Fresnes prison. Blanche was cheered one night when a guard handed her a package of her brand of cigarettes because she knew that Claude had been at the prison. But, unlike the other imprisoned wives, she had not been allowed to see her husband. Blanche interpreted this as an ominous sign. Blanche with her parents, Sara and Isaac Rubenstein, German-Jewish émigrés, ca. 1915. She was the youngest of 7 children (2 boys and 5 girls). A rebellious young woman, Blanche refused to acquiesce to her parent’s wishes that she learn the domestic arts and get married like the rest of her sisters.  She had dreams of becoming an actress.

After her show of affection for Lily, Blanche was thrown into solitary confinement, to be released from her cell only for questioning. Day after day, for hours on end, all sorts of accusations were leveled at her – that she had harbored enemies of Germany, had aided fugitives and engaged in outright acts of terrorism. Accusations for which there was no evidence and which Blanche vehemently denied.

Unable to get anywhere with Blanche’s past, her interrogators began peppering her with questions about Lily: Was she a Russian spy? A Jew? A traitor? A ballet dancer? An artist? Blanche was promised that if she told the truth about Lily, she would be set free the next day. All that Blanche would give up was how she and Lily met: on a boat to France from Egypt in the 1930s. 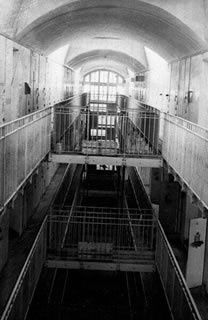 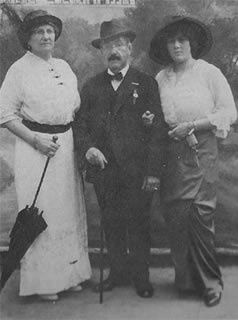 The days during which there were no interrogations were even worse. Then, she could hear shootings in the courtyard, tortured screams reverberating through the hallways and once, she was marched past a guard mopping up a river of blood. Eventually, she was thrown into a cell even smaller than the one she had occupied. There was hardly any room even to stand. Food and water were brought only haphazardly. Sleep became impossible and she started to become delirious.

One morning, even in her dazed condition, Blanche became aware of unusual activity in the prison. She heard a lot of shouting and scrambling and the sound of trucks pulling out of the courtyard. Maybe, just maybe, the Germans were evacuating. The liberation of Paris by Allied forces was imminent. Perhaps it had already begun.

But once more, she was pulled in for questioning. Her interrogator shoved her roughly into a chair and incredibly, in light of the chaos and palpable sense of emergency all around them, began battering her with questions about Lily again. When Blanche still stubbornly pleaded ignorance and issued denials, he struck her for the first time, and then bent her arm back to the breaking point. This time, wild-eyed and racked by pain, Blanche agreed to tell him the truth. “I am a Jew,” she screamed, “not Lily. I was born on the east side of New York, the Jewish section. My name is Rubenstein. My parents came from Germany.” She then confessed to using a fraudulent passport.

Staring at her in disbelief, the interrogator warned that if she continued in this manner, he was going to shoot her. At that moment, a guard barged into the room to announce that the last truck was about to leave. He could hardly be heard above the din Blanche was making laughing and crying simultaneously and loudly insisting that she was Jewish. The guard grabbed her and asked the interrogator what to do while moving his hand towards his revolver. The interrogator stood there looking at her for a moment. Then, he slowly shook his head and tapped his temple indicating that Blanche was crazy. “Let the damned French take care of her. We have better things to do.” 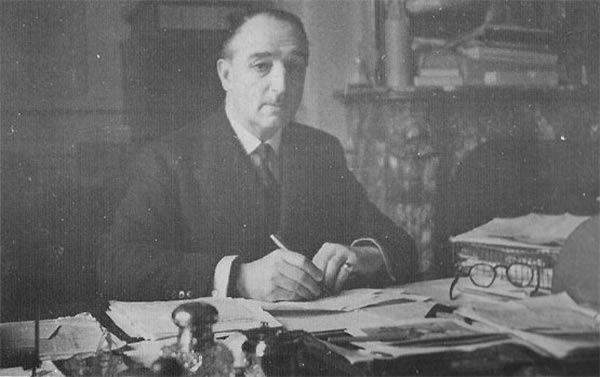 Claude Auzello in his office at the Ritz. All his friends and acquaintances knew that Claude had two loves in his life: Blanche and the Ritz

And just like that, unbelievably, Blanche was free. She kicked off her wooden shoes and, barefoot, began making her way towards the Ritz, 12 miles away. Blanche walked until she could walk no more until a man appeared from a nearby house and after speaking with this hollow-eyed, emaciated stranger, telephoned the Ritz. Claude had difficulty recognizing her. After two months of imprisonment, she had lost over 40 pounds.

Slowly, bit by bit, life returned to normal at the Ritz. One of the first Americans to re-appear was fashion designer “Foxy” Sondheim, mother of composer and lyricist, Steven Sondheim. She had read in Walter Winchell’s column not long before her arrival in 1945, that Blanche had been killed by the Nazis. 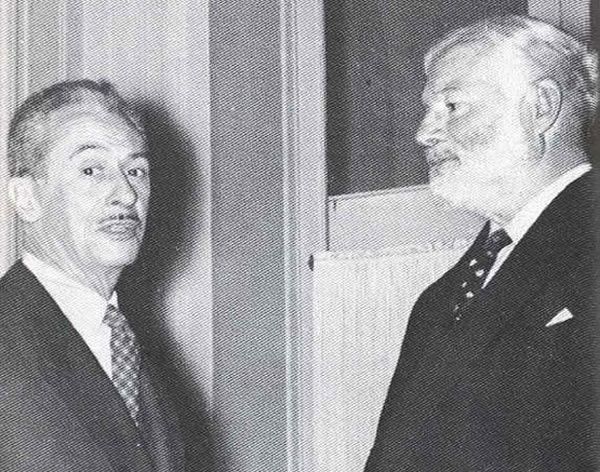 Guests began trickling back and by the early 1960s, the trickle had turned into a stream. Charley Ritz, the surviving son of César and Marie Louise Ritz, founders of the hotel, had returned too, after a long absence spent living in the US, to take over the executive reins in the wake of his mother’s death in 1961.

This lover of all things American had big ideas (dial telephones, radios and even television sets in every room!) and didn’t have much use for Claude, a stalwart defender of his father’s strict rules and standards for four decades. Charley Ritz was a fly fishing aficionado. He renovated the Grill Room at the Ritz and renamed it "L'Espadon" (The Swordfish) in honor of the sport. Blanche and Claude in the last picture taken of them together.

Claude had been running the Ritz first as Manager and then as Managing Director and overseeing practically every detail of its operation since 1925. Little by little, however, Charley whittled away at Claude’s responsibilities until they were practically nonexistent.

Dejected, this native of Nice told Blanche he wanted to retire to Provence. She wouldn’t hear of it. She had become addicted to life at the Ritz and could not envisage any other sort of life for herself.

Claude, in essence, was stuck between a boss who wanted him out and a wife who wanted him to stay. It weighed on him too, that Blanche was now ailing.

In the pre-dawn hours of May 29, 1969, a neighbor heard what sounded like a tire blowout. Three hours later, he was awakened again by the same noise. Not long thereafter, Claude and Blanche’s maid entered their apartment on the Avenue Montaigne and fixed breakfast.

After waiting for what seemed like a long time, she entered their bedroom to see if they were awake. What she found was a bloody tragedy: Blanche lying dead on the bed and Claude lying dead on the floor with a gun clutched in his hand.

Surprisingly, given her adventurous life and the revolving cast of characters who had surrounded her, not much has been written about Blanche Auzello. Most of the information published about her is in a 1978 biography called Queen of the Ritz (the Bobbs-Merrill Company) written by her nephew, Samuel Marx who was a Hollywood producer (Lassie Come Home, 1943), screenwriter and author (Deadly Illusions: Jean Harlow and the Murder of Paul Bern, 1990). It is from this book that I recount her story.