Marie Dubois was a French New Wave actress who became an unwilling pawn in the rivalry between Truffaut and Godard. 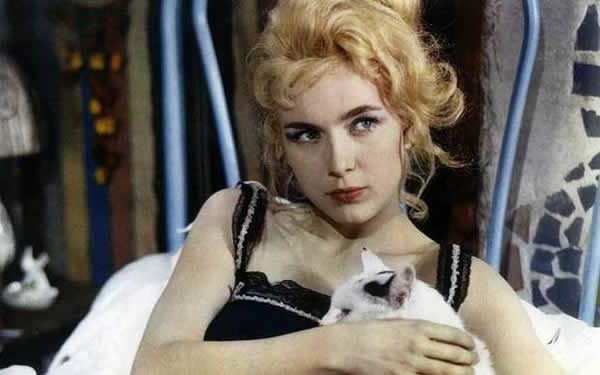 Marie Dubois, who has died aged 77, was an actress whose air of vulnerability diluted the ennui of the French New Wave; she appeared in François Truffaut’s Jules et Jim (1962) and Jean-Luc Godard’s Une femme est une femme (1961), and became an unwitting pawn in the power play between the two rival directors.

Her debut, in Truffaut’s Shoot the Piano Player (1960), was to set the tenor of her career. As Léna, the orphan waitress who is hopelessly in love with the titular bar pianist (played by Charles Aznavour), she exudes both sensitivity and stability. Truffaut called the character “the girl with whom one could make a fresh start”. It is not to be — Lena is gunned down by gangsters.

Marie Dubois’s air of innocence, blue eyes and gentle smile were to make her a natural choice for casting agents looking for the embodiment of a fragile woman. It was a fitting observation: while filming Shoot the Piano Player, Marie Dubois experienced the first faint symptoms of multiple sclerosis, a condition that she would battle for the rest of her life.

Truffaut became her mentor during the shoot. He suggested that she adopt a screen name (she was born Claudine Huzé), settling on Marie Dubois after the title of a 1952 novel by Jacques Audiberti. Marie Dubois later claimed that she and Truffaut had fallen in love while filming Shoot the Pianist but that the relationship had always remained platonic. At the time of the shoot Truffaut was married and already had a mistress, the actress Liliane David.

Jean-Luc Godard, however, swiftly took advantage of the situation. “You’ve been acting like a s---,” wrote Truffaut in a letter to Godard. “I knew you had seduced Liliane by telling her 'Francois doesn’t love you any more, he’s in love with Marie Dubois who’s in his new film,’ and I found that pitiful.” Meanwhile Godard noted: “Every day the women we sleep with separate us more than they bring us together.” Despite the rumours and love spats, Marie Dubois and Truffaut remained friends until the director’s death in 1984.

Claudine Lucie Pauline Huzé was born on January 12 1937 in Paris and studied at L’École nationale supérieure des arts et techniques du théâtre (ENSATT). She began her career on stage, appearing in Molière’s The Misanthrope and Arthur Miller’s The Crucible.

Truffaut spotted her in the 1959 television series La Caméra explore le temps (“The Camera Explores Time”) and invited her to a screen test. “Imagine you’re a really vulgar fruit peddler,” she was told by the man behind the camera. “Curse me out.” She screwed up her nose: “I’m so embarrassed. It’s awful.” Two years after the success of Shoot the Pianist she worked with Truffaut again, on his love-triangle drama Jules et Jim (1962). Playing Thérèse, the anarchic ex-girlfriend of Jules (played by Oskar Werner), she was responsible for one of the film’s most memorable scenes, in which she mimics a steam engine by smoking a cigarette back to front, puffing away on the lit end. In 1961 (the year she took a cameo part in Godard’s Une femme est une femme) Marie Dubois had married the actor Serge Rousseau, another good friend of Truffaut, who would later became an actors’ agent .

Although Marie Dubois worked primarily in supporting roles, her range was broad. She gave the angst of the New Wave milieu a tender heart, working under the direction of Alain Resnais, Louis Malle and Roger Vadim in addition to Godard and Truffaut; but she embraced slapstick comedy and Gallic noir with equal enthusiasm.

Comedies brought her to an international audience. She was the female lead in the wartime farce La Grande Vadrouille (“The Big Runaround”, 1966) which is one of France’s most popular films and appeared in the English language car race caper Monte Carlo or Bust! (1969). In both films she starred opposite Terry-Thomas.

Thrillers, however, provided some of her best parts. In 1978 she played the ill-fated lover of Yves Montand’s chancer in Alain Corneau’s La Menace. The performance won her the best supporting actress award at the 1978 Césars (the French Oscars).

When film roles were sparse she turned to television , much to the disapproval of Truffaut. “I’ve always felt an actor should do television only if he’s forced to,” he said to Serge, advising that his wife would be better occupied writing her memoirs: “Marie will have to learn to be philosophical about those periods when she is 'resting’.”

In later life Marie Dubois campaigned for awareness of, and care for, people suffering from multiple sclerosis. “I was born in the cinema at the very same time that a little death crept inside me: multiple sclerosis,” she wrote in her memoirs. “The first time it’s like a fleeting shadow glimpsed in the night and that dissipates in daylight. Hardly disturbing. Then, little by little, it began appearing in the light. The shadow took shape. And that shape was my own.”

As her illness worsened, her film appearances became less frequent, although she continued to take small parts during the 1980s and 1990s, most notably in Alain Resnais’s Mon Oncle d’Amérique (1980) and Francis Girod’s Descent into Hell (1986). The latter earned her another César nomination.

Serge Rousseau died in 2007, and Marie Dubois is survived by their daughter, the actress Dominique Rousseau.