To follow him cannot be easy, but he has left the Labour Party in its best form since 1950. Hugh Gaitskell’s death is a personal, political, and national tragedy. He has died young, at a time when he had at least an even chance of being the next Prime Minister, and when he looked like gaining office after hard years in opposition. In Labour’s ranks he leaves a gap that cannot be filled quickly - though it must be filled - for he alone of its leaders was known, trusted, and respected far beyond the party. Nationally, the tragedy is that a man of immense courage and integrity has been taken away just when he was most likely to be needed.

He would have been a better Prime Minister than Leader of the Opposition, because his talents were creative. Already, as Minister of Fuel and briefly as Chancellor of the Exchequer, he had shown his ability for organisation and administration. As Leader of the Opposition, he was more concerned with seeking constructive policies - looking towards the day when Labour would again be in office - than with negatively damning the Government. He was too fair-minded not to see the truth of a situation and he knew that the freedom of any Government is circumscribed by events, by its allies, and by its physical resources. He rarely, if ever, took unfair advantage of the licence that an Opposition can exploit.

Personally, too, it could be said of him that in opposition he was too kind to some of his critics within the party. He never waged the kind of personal warfare that some of his closest colleagues waged against him. In office as Prime Minister he might have changed. His construction of a Cabinet would have been uninhibited: he saw little purpose in axing “shadows,” but he was determined that when it became the Government his party should give the country the strongest leadership that it could. 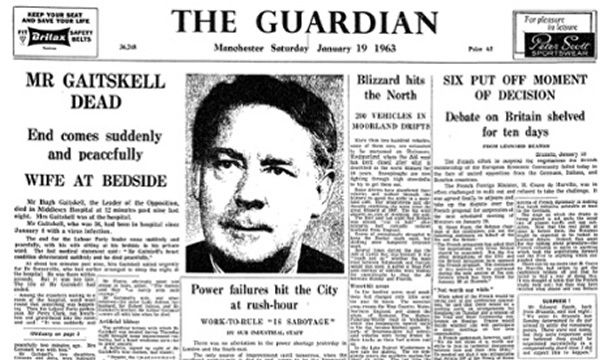 Of his courage, the Bevanite and bomb controversies are ample evidence. To a youthful Chancellor, rapidly promoted over the heads of experienced seniors, the Bevanite campaign against him could have been unnerving. He stood his ground, and his firmness helped him to win the leadership of the party in 1955. Suez was a test from which he emerged well; but as a national leader he did not really stand out until the 1959 election. Then, in spite of one tactical error (the income tax promise), he showed the coolness and good sense that a Prime Minister must have. The loss of that election was a disappointment, though not unexpected; it was followed by the bitterest attacks upon him from within the party, ending with the defeat of his defence policy at the Scarborough conference in 1960. He replied with the famous “fight, fight, and fight again” - for which the Left has never forgiven him - and by the long struggle to lead Labour out of the unilateralist wilderness.

His commitment to the Atlantic alliance was complete, though he sought constantly to find ways of promoting harmony between East and West. Disengagement in Europe, a lesser dependence by the West on nuclear weapons, and effective political control over the generals, were for years among the first priorities in his policy. Although he was not an early convert to the non-nuclear club, he was quick to see the danger of letting nuclear weapons spread. The coming of President Kennedy as effective leader of the Western alliance was a great satisfaction to him. The two men got on well together - better, one may surmise, than Mr Kennedy and Mr Macmillan do - and each found stimulus in the other’s brisk intellect. Latterly, Cuba and the Common Market had clouded their respect for each other, but this was a passing phase. As Prime Minister, Hugh Gaitskell would have enjoyed the best of relations with the White House.

It should be said also that he was a friendly and unaffected person. He enjoyed the kind of peaceful and private family life that fortifies a man in public office.

Whoever follows him as Labour leader will have to continue along the course he has set - a non-doctrinaire approach to economic and industrial policy, a firm commitment to collective defence and multilateral disarmament and a readiness to see gradual reform of the Labour Party’s structure from within. Any other course will reopen old wounds and drive away sympathetic voters. To follow him cannot be easy; but he has left the Labour Party in its best form since 1950.