In May 1939, a group of nearly 900 German and Austrian women were marched by female SS guards through the woodland of northern Germany. Their destination was Ravensbrück, 50 miles north of Berlin, the only concentration camp built solely to incarcerate women. 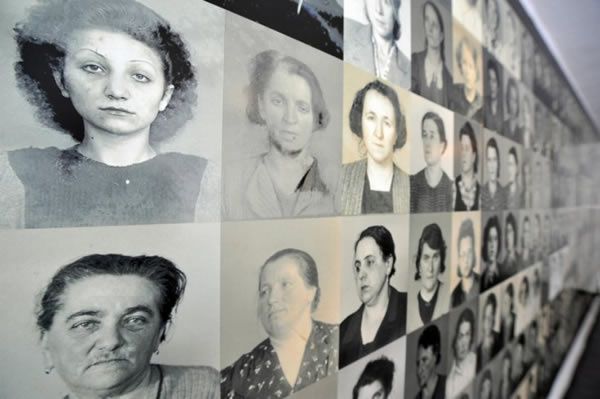 Ravensbrück was not designated solely for Jewish women, who only made up around 10 percent of the camp. Prisoners came from every country in Nazi-occupied Europe - the majority from Poland. They were deemed equally inferior, branded "asocial"; political enemies, dissidents, Gypsies, Jehovah's Witnesses and homosexuals.

Over 130,000 women and children passed through the camp's system by the time it was liberated in 1945. In the six years the camp was in operation, up to 50,000 women were worked to death, starved, shot or gassed. Yet Ravensbrück, designed by Heinrich Himmler, is largely overlooked in the history of the Nazi genocide.

The story of the camp is still relatively unknown. In the spring of 1945, as the Soviet Red Army closed in the camp, the SS removed as many prisoners as possible to avoid leaving behind live witnesses who could testify to their crimes. A huge throng of inmates were marched to death, those deemed to weak too walk executed on the spot. Prisoners' records were systematically destroyed and those that survived were located in Eastern Bloc states, rendered inaccessible until the fall of the Iron Curtain.

Dr Christopher Dillon, a lecturer in modern European history at King's College London, told IBTimes UK: "Official remembrance of the Nazi concentration camps was very partial and selective in the Eastern Bloc. They were depicted as sites of heroic communist resistance to fascism and functioned in the Cold War as a metaphor for the struggle between the 'socialist' East and 'fascist' West German states.

"Despite Communism's ostensible blindness to gender, there was little place for women in the default Soviet imagery of heroic masculine resistance," he added. "Historians in the West had no access to the Ravensbrück documents until the fall of the Berlin Wall, while those in the Eastern Bloc had no professional incentives to complicate this canonized narrative."

Ravensbrück was second in size only to the women's camp in Auschwitz-Birkenau, but this is not the only explanation for the comparative dearth of testimonies.

"Ravensbrück, although it had gas chambers by the end of the war, has also been less closely associated with the Holocaust than Auschwitz and this has clearly influenced the public's lesser appetite for memoirs of the camp," Dr Dillon said. "But even so, the relative lack of testimony should not be overstated - 400 Ravensbrück inmate memoirs had been published even by the time of the fall of the Berlin Wall." Female prisoners labour at Ravensbrück in 1939

Construction of Ravensbrück began in November 1938 at the behest of Himmler. It was designed to hold a maximum of 3,000 prisoners and opened in May 1939, but by early 1945, held over 46,000 women. As the population soared, sanitary conditions that had been dire at the outset worsened, and outbreaks of tuberculosis and typhus spread quickly.

The meagre food rations declined further, providing insufficient nutrition for the heavy labour prisoners were forced to undertake, such as outdoor jobs or manufacturing V-2 rocket parts for Siemens. Some female prisoners, many from the Ravensbrück camp, were forced to provide sex to inmates in other concentration camps.

SS authorities periodically subjected prisoners in the camp to "selections", to single out prisoners considered unable to work. Some were shot or killed by lethal injection, others were transferred to nearby euthanasia centres or Auschwitz-Birkenau to be gassed. In early 1945, the SS constructed a gas chamber on site, near the camp crematorium.

"Treatment for the women and children at Ravensbrück was brutal; starvation, medical experiments, forced abortions and torture were rife," said Thamar Barnett, learning programme manager of the Holocaust exhibition at the Jewish Museum London..

"Sometimes pregnant women were allowed to give birth, only to see their babies either be used for medical experiments or starved to death as milk and food were not supplied. New mothers more often than not had no breast milk due to the horrific living conditions."

The story of the "rabbits" is one of the most barbaric to emerge from the camp. Three years after Ravensbrück opened, doctors conducted medical experiments on prisoners to trial different drugs; cutting into legs, infecting them with bacteria and breaking bones. Of the 74 Polish victims, five died as a result of the "operations", six with unhealed wounds were executed and the rest survived with permanent physical damage.

"In Ravensbrück I witnessed SS doctors forcibly sterilising young Sinti [Romany gypsy] girls," survivor Amalie Schaich recalled after the war. "They were picked up from the blocks to be 'operated' on - it was like being in a slaughterhouse. The girls screamed so much that I had to cover my ears, because I couldn't bear it any more." Daily life in Ravensbrück was overseen by so-called "warders" – or Aufseherinnen – who were not part of the SS. Male SS members provided central leadership and perimeter security for women's camps.

"Heinrich Himmler, it seems, was reluctant to deploy male SS personnel to guard female concentration camp prisoners," Dr Dillon explained. "Violence against women did not fit with its masculine ideals at this stage, although such inhibitions were later overcome in the Holocaust."

These gendered ideals were baseless inside the camp, however, as the Aufseherinnen inflicted unimaginably cruel punishments on prisoners. Geneviève de Gaulle-Anthonioz, who wrote The Dawn of Hope: A Memoir of Ravensbrück in 1999, recalled that she witnessed one warder, Ruth Neudeck, cut the throat of an inmate with "the sharp edge of her shovel". Neudeck was sentenced to death at the Ravensbrück Trials in 1948; one of the few female warders ultimately punished for their crimes after the war.

On 30 April 1945, less than 3,500 malnourished and ill prisoners were found alive at the camp when it was liberated by the Red Army. The Ravensbrück National Memorial was opened on the site in 1959, as one of the three national memorials.