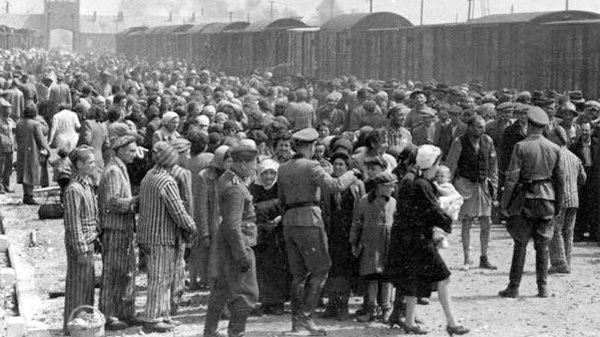 Hungarian Jews on the Judenrampe (Jewish ramp) after disembarking from the transport trains at Auschwitz-Birkenau, May 1944. To be sent rechts! – to the right – meant the person had been chosen as a laborer; links! – to the left – meant death in the gas chambers.

The British Broadcasting Corporation has denied it barred researchers working on an Auschwitz documentary from turning over the names of “hundreds” of living Nazi workers at the concentration camp to prosecutors.

The allegations that the BBC had prevented its employees from reporting its sources emerged in a Fox News report on Monday, which cited a 2006 email from one of the documentary’s leading researchers — a statement the researcher later retracted.

The network and researchers involved in the 2005 “Auschwitz: The Nazis and ‘The Final Solution'” mini-series maintained that the names of Auschwitz employees were culled from German records and were well-known to the local authorities, the report said. Meanwhile, the Nazi hunters of the Simon Wiesenthal Center castigated the researchers for failing to pass on the list of names so that they could pursue further investigations.

“Unfortunately, I cannot pass on data of my research work,” researcher Frank Stucke wrote in 2006. “It would be against BBC policy to give away names of witnesses, because then we would never get any interviewees anymore.”

Stucke later denied the BBC had ever held him back from reporting the information, while others pointed out that the Nazi sources were located using German files, which attested to a greater, institutional failure on the part of the German government to crack down on Auschwitz workers.

In an interview with Fox, Strucke said: “I found hundreds of people all over Germany who worked there [as] guards or were somehow involved in Auschwitz.”

“That was in 2003… people were very old then, and I don’t know how many of them will be alive at the moment.”

In a later email, sent via the BBC, he wrote: “I do not have a list of ‘hundreds’ of names of SS who were in Auschwitz that are not known to German prosecutors.”

As for the allegations that the network had actively obstructed his efforts to report the war criminals, he wrote: “That is just not true.”

A statement to Fox News from the BBC said the allegations were “simply wrong.”

It said that was “not least because virtually all of the names of former members of the SS at Auschwitz that the BBC learnt about in the course of making the 2005 series were gained from studying the files of the German authorities. So the German authorities knew of these people before the BBC did.”

The statement was echoed by the documentary’s producer Laurence Rees, a former head of the BBC TV history programs.

“I have always cooperated fully with German authorities, when asked, over the prosecution of suspected war criminals, and will continue to do so,” he told Fox News.

He indicated that the researchers went beyond the original SS files to track down the potential war criminals, comparing the names to trial records and Russian documentation, and then seeking out relatives in the phone book.

Efraim Zuroff of the Simon Wiesenthal Center said that in 2011, with the conviction of a former Sobibor guard, “There was a full-scale revolution in terms of German prosecution policy.”

Zuroff harshly criticized the BBC researchers for failing to pass along the list.

“People who make films don’t think they have any obligation to help bring [the criminals] to justice,” he said. “They are only interested in art, not in justice.”