Distinguished stage and screen actor best known for her role as the shallow and materialistic mother in the hit 1967 film The Graduate. 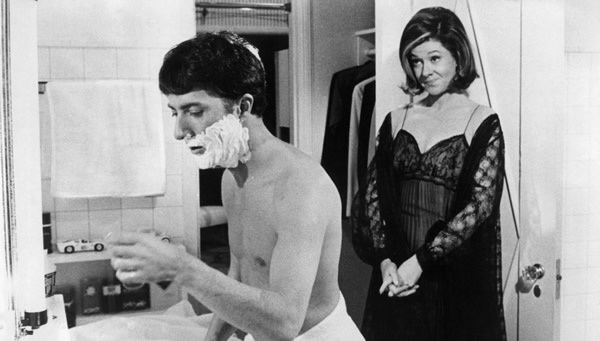 Elizabeth Wilson and Dustin Hoffman in a significant Oedipal sequence in The Graduate, during which the mother asks her son where he goes at night. The film rapidly cuts to him in bed with Mrs Robinson

It is a show business axiom that a small role in a hit Hollywood film is worth much more in the currency of fame than dozens of longer, meatier parts in the theatre. Thus Elizabeth Wilson, who has died aged 94, is primarily acknowledged as having played Dustin Hoffman’s shallow and materialistic mother in The Graduate (1967) rather than for her critically acclaimed stage performances in plays by Anton Chekhov (Uncle Vanya), Oscar Wilde (The Importance of Being Earnest), Eugene O’Neill (Ah Wilderness!), Bertolt Brecht (The Good Woman of Szechuan, The Threepenny Opera) and Edward Albee (A Delicate Balance).

Nevertheless, Wilson was admirable in Mike Nichols’s The Graduate, initially displaying maternal pride at her son’s achievements at college, reading from the yearbook to a houseful of guests and embarrassing her son at the same time, then later displaying touching bewilderment at his anti-social behaviour. There is a significant Oedipal sequence in a bathroom when Wilson, in a black negligee, has an argument with Hoffman about where he goes at night, before the film cuts rapidly to him in bed with Mrs Robinson (Anne Bancroft), who is around his mother’s age.

Wilson was born in Grand Rapids, Michigan. Her mother, Marie (nee Welter), and her father, Henry, an insurance agent, encouraged her to follow her ambition to go on stage after graduating from high school. She immediately moved to New York to study at the American Academy of Dramatic Arts and with Sanford Meisner at the left-leaning Neighborhood Playhouse. At the latter she learned Meisner’s approach to method acting, which he characterised as “living truthfully under imaginary circumstances”.

It took some years before she got her first Broadway role as the gossipy schoolteacher Christine Schoenwalder in William Inge’s Picnic (1953), a part she reprised in the 1955 film version. It was her big screen debut if one discounts her fleeting appearance in Alfred Hitchcock’s Notorious (1946), years before her memorable role in the same director’s The Birds (1963) as a waitress who, beholding a drunk who declares that the arrival of the birds is the end of the world, says: “Woe unto them that rise up early in the morning that they may follow strong drink.”

For much of the 1960s Wilson made appearances in television series such as East Side, West Side and in off-Broadway plays such as Henry Livings’s Eh? (1967), in which both she and Hoffman were spotted by Nichols, who cast them in The Graduate. Nichols went on to give Wilson character roles in Catch 22 (1970), Day of the Dolphin (1973) and Regarding Henry (1991), as well as a substantial part in his starry 1973 Broadway production of Uncle Vanya, in which Wilson was poignant as the joyless, unloved Sofya Alexandrovna in a company that included Julie Christie, Lillian Gish, Nicol Williamson and George C Scott.

Wilson, who was something of an expert at playing mothers, won a Tony award for her role in the theatre as the mother of a blind Vietnam vet in David Rabe’s 1971 black comedy Sticks and Bones. She continued to shine as Mrs Peachum in The Threepenny Opera (1976), in which she belted out The Ballad of Sexual Dependency, and as Lady Bracknell in The Importance of Being Earnest (1977). On screen, in Nine to Five (1980), directed by Colin Higgins, Wilson made an impact as the obnoxious, nosy personal assistant of the sexist boss of office workers Jane Fonda, Lily Tomlin and Dolly Parton, who manage to turn the tables in the end. In contrast, she played Ralph Fiennes’s cynical upper-class novelist mother in Robert Redford’s Quiz Show (1994).

Her last stage appearance came in Noël Coward’s Waiting in the Wings (1999) set in a charity home for retired actors. Of a cast headed by Lauren Bacall and Rosemary Harris a New York critic wrote: “Elizabeth Wilson fares best, benefiting from the warmth and sceptical compassion Coward has given her character.” Her final film role was as the mother of Franklin D Roosevelt (Bill Murray) in Hyde Park on Hudson (2012).

She remained single throughout her life, explaining in her later years that she never wanted to “stay home and raise a family”.

She is survived by her sister, Mary.