Artist, curator and specialist in the creation of medals whose work was exhibited all over the world. 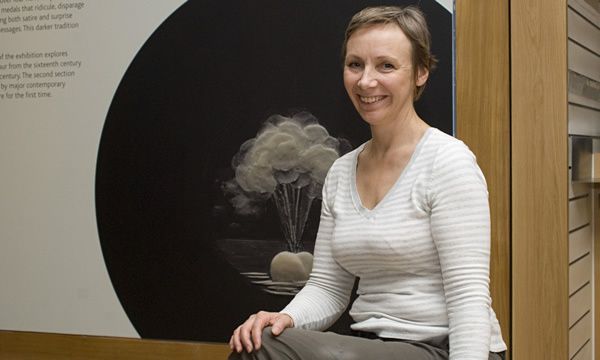 Felicity Powell in front of one of her pieces, Hot Air, at the Medals of Dishonour exhibition at the British Museum in 2009

Medals are usually given as accolades – for military heroism, for public service, for achievements in various spheres, a traditional and often unremarkable form of expression. The artist and curator Felicity Powell, who has died aged 53 of cancer, worked in many mediums: she trained as a sculptor, and made works in wax, film, and glass, with symbolic and narrative elements. However, the art of the medal was her special sphere of interest and expertise, and she uncovered a startling strand in its history: a tradition of hostility and satire, commemorating the iniquities of tyrants and murderers, scrooges and leeches.

In the 1930s the American sculptor David Smith created a famous series of anti-corruption and anti-war medallions called Medals for Dishonor, and in 2009 Felicity asked several contemporary artists she admired to take part in her return to Smith’s idea. The result was the exhibition Medals of Dishonour, co-curated with Philip Attwood, the keeper of coins and medals at the British Museum, which opened there and then travelled two years later to the Hermitage Museum, St Petersburg.

The medal Felicity made was called Hot Air, and it shows a Medusa head with a serpent’s tongue on one side, and on the reverse a pair of buttocks rising out of the ocean, exploding with a blast of carbon emissions; round the rim she wound a tape measure inscribed with what she regarded as politicians’ lies about climate change.

Steve Bell’s medal indicted the invasion of Iraq; the Chapman Brothers, Mona Hatoum, Michael Landy (with an Asbo medal), Cornelia Parker and others also rose to the occasion. Grayson Perry’s medal, For Faith in Shopping, dissed the consumerist society. Felicity Powell with her display for Charmed Life: The Solace of Objects at the Wellcome Collection, central London, 2011. She designed and built the horseshoe-shaped illuminated vitrine to display a shoal of lucky charms

The exhibition also included items in this vein from the 16th century onward in the British Museum’s collection, and profile heads that Felicity displayed on mirrors. In Russia, a farcical, near-diplomatic incident arose when some saw a resemblance to Vladimir Putin in several of the profiles (all of which were based on her own features). Felicity was very funny about it once she had survived the furore.

Under Felicity’s inspiring direction, a Renaissance practice gained fresh and surprising vigour. Andrew Graham-Dixon singled out the exhibition for “bringing a dead language suddenly and startlingly back to life”. Felicity was an elegant, thoughtful, fascinating presence in any gathering, and she liked to stand tall – once, when I met her at an opening, she was glorying in new six-inch platform heels. Though she was unassuming about her own status, she had decided taste about that of others. She had a fierce wit, and a vivacious sense of pleasure and mischief. She also had an unusual and poetic imagination, and great curiosity about lesser-known corners of mythology and art.

Born in Woolwich, south-east London, Felicity was daughter of Thomas, an engineer, who had been in the RAF in the second world war, and Laurel (nee Rice). She went to Plumstead Manor School, graduated from Falmouth College of Art in 1983, went on to the Royal Academy in London to study sculpture, and won a Gulbenkian scholarship to the British School at Rome (1986-87).

There she met Ansel Krut, who had completed his MA at the Royal College of Art. They stayed on in Rome for three more years, and married in 1996. Felicity then returned to Falmouth to teach. It was when her students were working towards the annual medallic art competition run by the British Museum that Felicity discovered her own affinity with this complex, multilayered form.

From lost-wax casting to glasswork to drawing and film-making, her technical skills were many. All her artefacts have a quality of absorptive intimacy – authoritative yet often tender, caught in a video, Sleight of Hand (2011), that she made of herself modelling wax on a miniature scale. Her work was exhibited widely in Europe and the US, and she won numerous commissions. In 1999, for example, her design for a silver medal was chosen by the British Art Medal Association to commemorate the millennium. Breathtakingly beautiful in its simplicity, it showed the fluffy globe of a dandelion head on the obverse; on the reverse, tiny spores floated on the rim. Sleight of Hand, 2011, Felicity Powell’s video showing how she modelled wax on a miniature scale

Over several years Felicity contributed to a multimedia inquiry into the ambiguities of Arcadia undertaken with Ansel and the artist Lauren Bon. Her images of metamorphosing creatures were born of close natural observation but fantastical in effect: zooplankton, seedpods, seaweeds and snakes, mosses and corals, pomegranates and crustaceans, which keep about them a feeling of unease and of concealed forces. The Linnean Society, recognising her knowledge of flora and fauna, made her a fellow in 2008.

In 2002, Felicity was invited to create an installation in the cast court of the Victoria and Albert museum in London. The result was Drawn From the Well, covering the courtyard’s ancient wellheads with mirrors on which appeared her delicate drawing of tears and ripples.

For Charmed Life: The Solace of Objects, the show she curated in 2011 at the Wellcome Collection, she designed and built a horseshoe-shaped illuminated vitrine to display a shoal of lucky charms (keys, shoes, a stuffed mole, more horseshoes). These English magical objects came from a vast collection – 1,400 items – of amulets (objects supposedly protecting from harm) and folk remedies found mostly in London by Edward Lovett, a civil servant, in the early part of the 20th century. 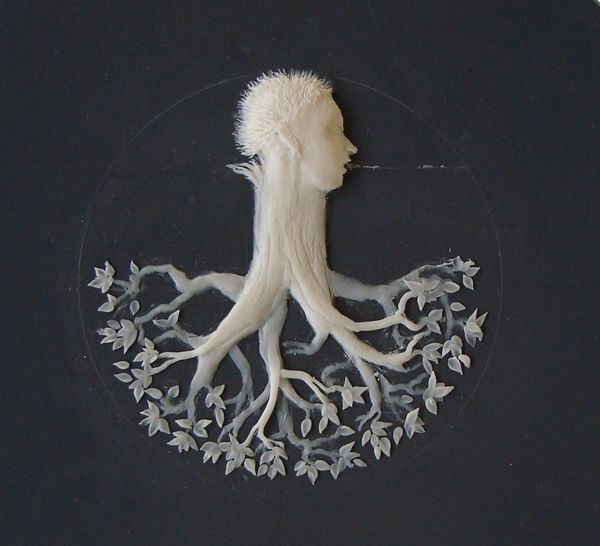 Felicity used them to inquire into the beliefs and hopes of vanished men and women, especially in relation to sickness and death. She was already very ill. One of her favourite items from the collection was a disc inscribed with the Lord’s Prayer written out in a circular pattern; she copied it exactly and laid it over CAT and MRI scans of her body, finding that although she was not a believer in higher powers of any kind, the repetitive act of copying calmed her and strengthened her during her treatments.

When she died, Felicity had just completed a medal for the 50th anniversary of St Cross College, Oxford, and another in praise of amateurs who work for conservation, commissioned by the Linnean Society. She was also working with Bon on a vast installation of a tree to be hung upside down in a silo in the desert in California – a monument to the drying up of water sources.

Felicity did not have faith in providence or in an external scheme of salvation, but she did invest something like belief in the act of making art, and she made it with rare subtlety, insight and meticulous skill.

She is survived by Ansel and their twin daughters, Hannah and Saskia.