Eva Kor, 81, the survivor to address the court in the trial of Oskar Groening, was subjected to live medical experiments along with her twin sister. Defendant Oskar Groening arrives for his trial in Luneburg yesterday

A Holocaust survivor subjected to Nazi medical experiments in Auschwitz along with her twin sister has called on a former SS guard on trial in Germany to tell her what diseases they was injected with.

Eva Kor, 81, the first survivor to address the court in the trial of Oskar Groening, 93, made the call on the second day of hearings in what may prove to be the last major Nazi war crimes case. Six Britons are now among the dozens of survivors who have joined the prosecution as co-plaintiffs.

Groening is being tried on 300,000 counts of accessory to murder, related to a period between May and July 1944 when more than 400,000 Hungarian Jews were brought to Auschwitz in Nazi-occupied Poland.

Most were sent straight to their deaths in the gas chambers. 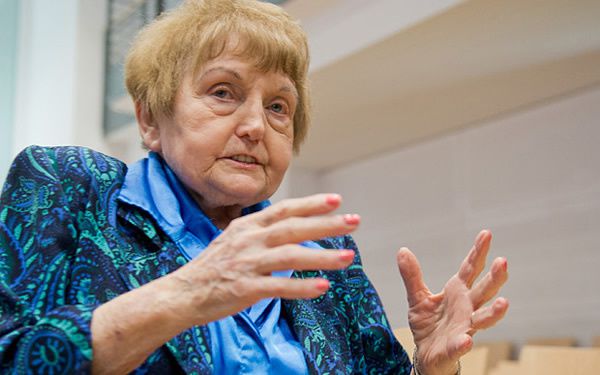 Ms Kor gave a chilling account of her ordeal at the hands of Josef Mengele, the doctor dubbed the Angel of Death who experimented on humans in the notorious death camp.

She said she and her sister Miriam only survived because Mengele was particularly interested in twins, and that within minutes of arriving at Auschwitz the rest of her family were gassed.

She said Mengele and four other doctors came to see her one day after she had undergone a series of injections and was suffering from high fever.

“Mengele looked at my fever chart and laughed sarcastically and said: 'Too bad. She is so young and she has only two weeks to live’,” Ms Kor told the court in the German town of Lueneburg.

“If I died they would have killed Miriam with an injection to the heart. Mengele would then have carried out a comparative autopsy,” said Ms Kor, who now lives in the US.

She somehow survived, as did her sister. But Miriam, who died in 1993, suffered from decades of kidney problems and later cancer which may have been linked to the Auschwitz experiments.

“I want to know what injections we were given,” Ms Kor told Groening, who impassively listened to her 40-minute address to the court.

It appeared to be a rhetorical question as Groening is not known to have participated in the medical experiments but was instead responsible for inspecting the luggage of arriving prisoners and sending any money found to Berlin to fund the Nazi war effort.

That job led the German media to dub him the “Bookkeeper of Auschwitz.”

On Wednesday he described in detail how cattle cars full of Jews were brought to Auschwitz-Birkenau, the people stripped of their belongings and then most led directly into gas chambers.

So many trains were arriving that often two would have to wait with closed doors as the first was “processed,” Groening said.

Thomas Walther, the lawyer representing several co-plaintiffs, told the Telegraph that three more Britons were now being represented by him, bringing the total of British co-plaintiffs to six.

The trial was moved to a larger venue after the local courtroom was deemed to small. It was adjourned at noon on Wednesday to clear the Ritterakademie venue for a play entitled Guter Sex ist Teuer (Good Sex is Expensive).