"I know that men are won over less by the written than by the spoken word, that every great movement on this earth owes its growth to great orators and not to great writers." —Adolf Hitler, "Mein Kampf," 1925. One of the world's most influential orators created the largest German political party, conquered a dozen nations, and slaughtered as many as 21 million people during his brutal 12-year Third Reich.

In more than 5,000 persuasive speeches, Nazi leader Adolf Hitler bewitched his audiences and promised them that his empire would reign for a thousand years.

Professor Bruce Loebs, who has taught a class called the Rhetoric of Hitler and Churchill for the past 46 years at Idaho State University, credits the Führer's oratory success to his charisma.

"He learned how to become a charismatic speaker, and people, for whatever reason, became enamored with him," Loebs told Business Insider.

"People were most willing to follow him, because he seemed to have the right answers in a time of enormous economic upheaval."

Hitler took advantage of the brewing discontent and found himself at the forefront of an opportunistic political ideology, the National Socialist German Workers' party. Before the Nazis' rapid ascent to the world stage, Hitler's party was largely unknown, winning a trivial 3% of votes in Germany's 1924 elections.

Eight years later, the Nazis were the largest party in the Reichstag. By 1934, Hitler and his frightening political agenda were leading the German government.

In short, as historian Robert Waite writes: "Hitler was Nazidom. Seldom in the history of western civilization has so much depended on one man's personality. He created his own political theory and a government that could not exist without him." Joseph Goebbels, the Nazi propaganda minister, wrote in his diary that Hitler was known to write his own speeches and edit them up to five times.

He would "work deep into the night, several evenings running, occupying three secretaries taking dictation straight into the typewriters before carefully correcting the drafts," according to British historian Ian Kershaw.

Loebs also noted that Winston Churchill preferred to write his own speeches as well, something rare among leaders of the time (and today). "I was born in 1929, so from '33 on my earliest memories are sitting in the kitchen hearing The Voice [of Hitler] on the radio," Steiner shared with Rosenbaum.

"It's a hard thing to describe, but the voice itself was mesmeric ... The amazing thing is that the body comes through on the radio. I can't put it any other way. You feel you're following the gestures," Steiner said.

"In the German language, Hitler drew on a kind of rhetorical power which — in a way is perhaps a little bit peculiar to German — allies highly abstract concepts with political, physical violence in a most unusual way. And Hitler was easily a genius at that, absolutely no doubt about it." 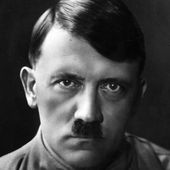 Hitler speech to SS by WW2HistoryArchive

Further, American psychologist Henry Murray describes the Führer's overall presence as "hypnotic" in "The Personality of Adolf Hitler," a 229-page report that was commissioned in 1943 by the Office of Strategic Services, a precursor to the CIA.

According to Murray's report, Hitler received frequent compliments on his grayish-blue eyes, even though they were described as "dead, impersonal, and unseeing."

The Führer was slightly below average in height and had a receding hairline, thin lips, and well-shaped hands.

Murray notes that the merciless Nazi leader was known to offer a weak handshake with "moist and clammy" palms and was awkward at making small talk.

'He had to add animation to his language' Hitler workshopped his delivery, hand gestures, and body language while practicing his speeches.

"He absolutely had to work at his presentation since it was half of his message," Loebs told Business Insider. "He had to add animation to his language in order to successfully communicate his ideas."

Hitler's personal photographer, Heinrich Hoffmann, captured 2 million images of the bellicose leader and was advised to never release a specific series to the public, according to his memoir, "Hitler was my Friend." In 1925, Hoffman took several photos of Hitler's facial expressions and gestures while he rehearsed speeches in a mirror.

After studying the images, the Nazi leader reportedly asked for them to be destroyed.

Secretly Hoffman saved the photos and published them 30 years later in his memoir. "No other photographer in history landed the scoop that he [Hoffman] did: intimate and exclusive access to a major head of state — and importantly, the chance to work with a subject who knew very well how to 'work' the camera, and paid painstaking attention to the cultivation of his public image," historian Roger Moorhouse later wrote in the republished introduction of Hoffman's memoir.

Here is a video of one of Hitler's speeches with English subtitles:

Hitler's Third Reich officially ended on April 30, 1945, when the Führer committed suicide in his bunker with his new wife after learning Allied forces had surrounded Berlin.