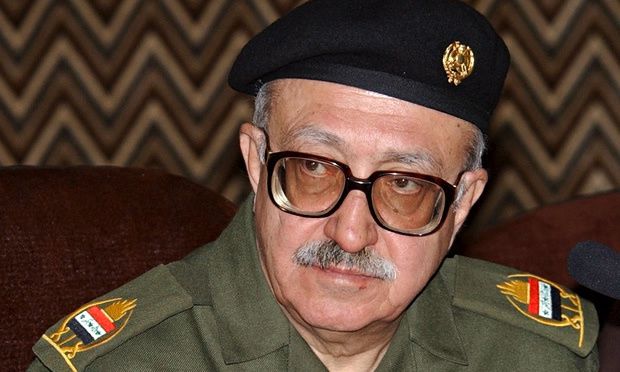 Tariq Aziz told the Americans in 1991: ‘You have never fought in the desert – you don’t know the conditions of the desert. Your soldiers will not be able to fight.’

The Iraqi politician Tariq Aziz, who has died aged 79, was one of the most instantly recognisable faces of Saddam Hussein’s regime. Since the 1980s, he had tried to explain and to justify Iraq’s policies to the international community – and had also tried to explain the world to Saddam. Neither task was easy. The risks were great, but so were the rewards, and Aziz made the most of his opportunities, skilfully playing the game of survival until his luck ran out.

When Saddam became president in the summer of 1979, Aziz’s appointment as deputy prime minister signalled his privileged position as one of Saddam’s inner circle. He stood out as one of the few members of that clique who did not come from the villages around Tikrit, and as the only Christian in such a senior post. In the eyes of Saddam this was to his advantage, since, as a Christian, he had no social power base and could have no ambitions to hold power himself.

Aziz’s prominence was also acknowledged when the underground Shia opposition group, the Islamic Task Organisation, tried to assassinate him on the campus of Baghdad University in April 1980. The attempt unleashed a ferocious campaign of repression against the Shia community in Iraq and contributed to the deterioration of relations between Iraq and Iran that led to war that year. As Saddam’s closest adviser on foreign affairs, Aziz was partly responsible for the decision to invade Iran in September 1980, accurately gauging the international indifference towards, even encouragement of, such an act of aggression against the newly established Islamic Republic of Iran. Like many others, however, he hopelessly misjudged the Iranians’ likely response.

In 1983 he was appointed minister of foreign affairs. By this stage the tide of war had turned against Iraq, with the revived Iranian armed forces threatening to sweep all before them. Saddam was anxious to enlist support from the west in particular, and the western powers, fearful of an Iranian victory, were only too eager to help. Aziz was an ideal intermediary who succeeded in re-establishing diplomatic links with the US and in cultivating a relationship of such warmth that, by 1987-88, US assistance had become a crucial part of the Iraqi war effort against Iran.

However, the crisis over Kuwait that followed the end of that war showed some of Aziz’s limitations. He seems to have believed that the invasion of Kuwait in 1990 would provoke regional and international reactions no more threatening than those of 1980, allowing Iraq to gain major advantages from what amounted to a hostage-taking strategy. Once it was clear how wrong this was, he reinforced Saddam’s view that western and regional powers were out to get Iraq, whatever it did. Despite months of diplomatic manoeuvring following the invasion, much of Iraq’s response to demands for immediate withdrawal from Kuwait was summed up in Aziz’s belief that Iraq was “damned if you do and damned if you don’t”.

As the crisis unfolded, he could not in any case take a different line without immediately coming under suspicion of disloyalty. Thus, in his final meeting with the US secretary of state, James Baker, in January 1991, he fell back on the consolations of the romantic Arab nationalism of his youth, telling the Americans “You have never fought in the desert – you don’t know the conditions of the desert. Your soldiers will not be able to fight.”

Born Mikhail Yuhanna in Tel Kaif, near Mosul, to a Chaldean Catholic family of small landowners, he had graduated from Baghdad’s College of Fine Arts in 1958. Like many of his generation, he was attracted by Arab nationalism, with its secular and anti-imperialist promise, gravitating towards the Ba’ath party in the late 1950s and changing his name to Tariq Aziz (“noble path”). As a schoolteacher and then a journalist, he became involved in the turbulent politics of Iraq in the 1960s. He was vehemently anti-communist, and also uneasy about the leftist trend in the Ba’ath party, represented by its then leader in Iraq, Ali Salih al-Sa’di. It was thus not surprising that, after the collapse of the short-lived Ba’athist regime in 1963, he should have associated himself with the conservative, military Ba’athists, led by Ahmad Hassan al-Bakr, who purged and took over the party in the 1960s.

It was during these years that Aziz became close to Saddam, al-Bakr’s tribal cousin. Soon after the coup d’état in 1968 that brought the Ba’ath to power again, Aziz was rewarded with the editorship of the main party newspaper, al-Thawra. In 1974 he was appointed minister of information, and three years later joined the ruling Revolutionary Command Council. During this period, Aziz publicly prepared the way for Saddam’s assumption of supreme power by helping to orchestrate the vilification of party members allegedly connected to a “communist plot” of 1978 and a “Syrian plot” of 1979. He was complicit in bloody purges that accompanied the unveiling of these alleged conspiracies.

After the defeat of Iraq in Desert Storm in 1991, Aziz relinquished his ministry, but remained Saddam’s principal foreign policy adviser, as well as deputy prime minister. In this position he was the main interlocutor with the United Nations over sanctions and increasingly with the weapons inspection teams both before 1998 and after 2002. He may well have known what was needed to give Iraq a clean bill of health, as far as compliance was concerned, but he also knew that this was an area of Iraq’s security policy reserved for the clan of the president into which he could not safely intrude. As in 1990-91, he did not believe, in any case, that Iraqi compliance would secure the lifting of sanctions, given the hostility of the US government to Saddam’s regime.

These features became even more marked in the crisis that started building from 2002. The determination of President George Bush to initiate “regime change” in Iraq through war and the sidelining of the UN left Aziz little room for manoeuvre and eventually made his skills redundant. Following the American-led invasion of Iraq, he gave himself up to US forces in late April 2003, having already been designated No 43 on the “playing card” list of the 55 most wanted Iraqis. He was held in US custody in Iraq and eventually charges were brought against him by the Iraqi high tribunal. But it was not until March 2009 that he was found guilty.

He was sentenced to 15 years’ imprisonment for his complicity in the executions of 42 merchants in 1992, having been acquitted in an earlier trial of any responsibility for the deaths that took place in the suppression of the Shia uprising of 1999. In August 2009 a further seven years were added to his sentence for his part in the forced displacement of Kurds in the 1980s. Meanwhile, in the slow process of the tribunal, further charges had been brought against him, the most serious being those linking him to the brutal suppression in the 1980s of Shia Islamist organisations. In October 2010 he was found guilty and sentenced to death by the Iraqi high tribunal for “crimes against humanity”. However, the then Iraqi president, Jalal Talabani, made it clear that he would not sign the death warrant, and Aziz was still a prisoner at the time of his death.

Aziz is survived by his wife, Violet, two sons, Zaid and Saddam, and two daughters, Zainab and Maysa. His family had lobbied unsuccessfully for him to be released from prison on health grounds.