US actress and model Diana Douglas has died in Los Angeles aged 92, her family says. 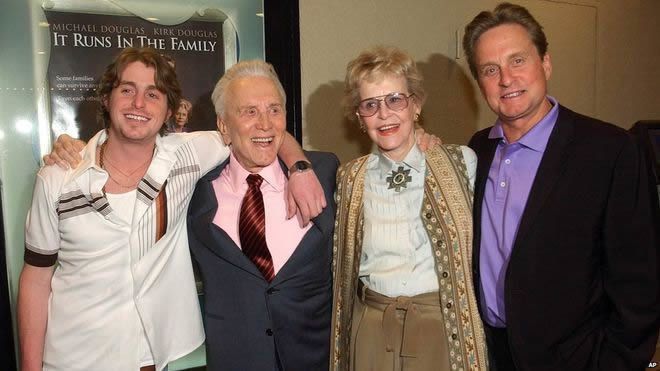 Diana Douglas appeared in It Runs in the Family with Cameron, Kirk and Michael Douglas (L to R) in 2003

Ms Douglas appeared in dozens of films and TV shows, including Planes, Trains and Automobiles, ER and The West Wing.

She was the first wife of actor Kirk Douglas, and mother of actor Michael Douglas, and appeared with both in the 2003 film It Runs in the Family.

She died of cancer in a retirement home on Friday, her husband of 15 years, Donald Webster, said.

She began her career with Warner Bros, and modelled on the cover of Life Magazine in 1943.

She and Kirk Douglas married in 1943 and had two sons, Michael and Joel. The couple divorced in 1951 but remained on good terms, and appeared together in It Runs in the Family, a film about a dysfunctional family, along with Michael and their grandson Cameron.

Ms Douglas was married to actor Bill Darrid from 1956 until his death in 1992.

"She was a person much beloved by everyone," Mr Webster said in quotes carried by CNN.

"One of her greatest qualities was that she was always thinking of the other person."