Ben Bradlee, who has died aged 93, was the most vivid and successful American newspaper editor in many generations. As helmsman of the Washington Post he will always be known as the man who helped bring down a president – in 1974 when Richard Nixon resigned in the wake of the Watergate scandals – but also for his cavalier style, his imagination and a singular ability to inspire those who worked for him. To the “Boston Brahmin” manor born, on August 26 1921 and with antecedents dating back to the Massachusetts colony of the 1630s, he was accustomed to moving in the highest circles, for example as an intimate of President John F Kennedy. Yet Benjamin Crowninshield Bradlee was at heart a street fighter, never intimidated by the mightiest in the land, loving to dish it out and able to take punches too.

Above all, he was a dyed-in-the-ink newspaper man, his only real career after a privileged preparatory school and Harvard education and distinguished naval service in the Pacific theatre in the second world war. He helped found a small-town paper in New Hampshire in 1946, graduated to the Washington Post two years later and remained never far from it for the rest of his life, apart from a couple of early years in Paris with the US embassy.

Bradlee also can be said to have built the Post into a publication far beyond its previously modest provincial status. He had become a friend of Philip Graham, the publisher, and persuaded him to buy Newsweek in the late 1950s when Bradlee was serving as the magazine’s Paris bureau chief. After Graham committed suicide in 1961, he was to forge an indelible partnership with his widow Katharine when, painfully shy and inexperienced, she assumed her late husband’s duties. She promoted him to managing editor in 1965 and executive editor three years later, where he remained for another 23 years. Even in notional retirement his presence was felt in its newsroom.
"The original story landed on the desks of two junior reporters, Bob Woodward and Carl Bernstein, and to Bradlee’s credit he stuck with them throughout"

Their first great journalistic coup was the publication in 1971 of the Pentagon Papers, the classified account of all the policies that brought about the Vietnam war. Only after the Supreme Court had rejected the government’s arguments that it was against the national interest were they brought into the public domain.

But even that paled into insignificance compared with the tangled skein that was Watergate, which began in 1972 with the botched break-in of the Democratic party’s headquarters in the building complex of that name by burglars with connections to the White House. The original story landed on the desks of two junior reporters, Bob Woodward and Carl Bernstein, and to Bradlee’s credit he stuck with them throughout. That was in spite of reservations from his own senior staff and threats beyond number from Nixon’s cohorts including John Mitchell, the attorney-general.

The saga was well captured in the film All The President’s Men, with Jason Robards at his most imperious as the editor, outshining even Robert Redford and Dustin Hoffman as the young reporters. Bradlee had in effect put the Post on the map. He used to say that he thought his newspaper never achieved “the cruising speed” of the New York Times, but it surely rocked the Old Grey Lady’s boat regularly, a singular satisfaction to him.

Not that he was perfect. In 1981, the Post won a Pulitzer Prize for reporting on the case of an eight-year-old heroin addict in the capital. It turned out that the story, by Janet Cooke, was confected from whole cloth. The prize was returned and Bradlee ordered a full-scale exposure of what had happened in his own paper. That set something of a precedent, followed by the New York Times in the Jayson Blair plagiarism case more than 20 years later and its self-criticism of its reporting of the run-up to the war in Iraq in 2003.

He was also sometimes criticised for not having let drop any hint of Kennedy’s sexual escapades, of which he was certainly familiar not least because one liaison was with his own then sister-in-law. Unlike now, it was the habit of those times not to report on unpresidential behaviour.

His own exceptionally well-connected background might explain his reticence, as might his loyalty to JFK, about whom he wrote an affectionate memoir. His first marriage was to Jean Saltonstall, a fellow upper-crust Bostonian, and his second was to Antoinette Pinchot, whose sister was married to Cord Meyer, the CIA luminary. In 1978 he wed Sally Quinn, the young reporter he had made into a star in the Post’s then innovative Style section. He is survived by her and their son, as well as a son from his first marriage and a son and daughter from his second marriage.

By common consensus, the Post declined in quality after he stepped down, reverting more to its local roots, becoming more conservative in its editorial positions and losing a lot of the talent he had fostered to other publications and media. Sold two years ago to Jeff Bezos, chief executive of Amazon, it no longer has any of the Graham family in management positions. But what it misses most of all is the editor who led it down true paths of journalistic glory. With Katharine Graham, publisher of The Washington Post, leaving the District Court in Washington in June 1971 after being given the go-ahead to print the Pentagon papers on Vietnam 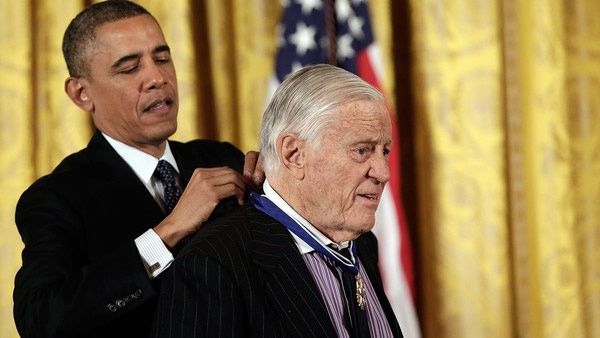 Bradlee sits between the Washington Post’s Watergate reporters Carl Bernstein, left, and Bob Woodward at a 2012 event commemorating the 40th anniversary of the affair The three journalists, whose coverage helped bring down President Richard Nixon, at a 2005 screening of ‘All The President's Men’, a film based on the Watergate affair