Residents in the Japanese city of Hiroshima are commemorating the 70th anniversary of the first atomic bomb being dropped by a US aircraft. A ceremony, attended by PM Shinzo Abe, was held at Hiroshima's memorial park before thousands of lanterns are released on the city's Motoyasu river.

The bombing - and a second one on Nagasaki three days later - is credited with bringing to an end World War Two.

Addressing 40,000 people who attended the commemoration ceremony at Hiroshima's peace park near the epicentre of the 1945 attack, Mr Abe called for worldwide nuclear disarmament.

He said that that atomic bomb not only killed thousands of people in Hiroshima but also caused unspeakable suffering to survivors.

"Today Hiroshima has been revived," the prime minister said, "and has become a city of culture and prosperity.

"Seventy years on I want to reemphasise the necessity of world peace." Incense sticks were burnt in the city on Thursday morning Prayers were said throughout Hiroshima on Thursday 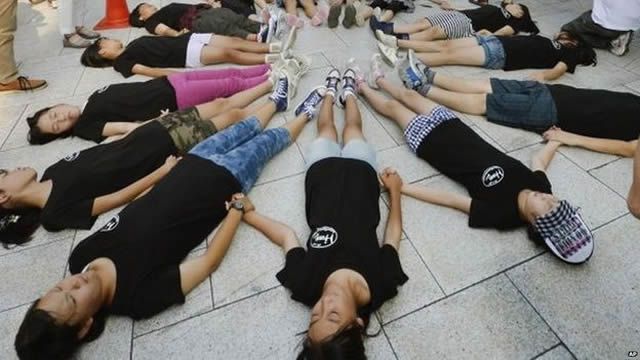 Mr Abe said that as the sole country to face nuclear attack, Japan has a duty to push for nuclear weapons elimination

Mr Abe and Hiroshima Mayor Kazumi Matsui were joined by US Ambassador to Japan Caroline Kennedy for the official ceremony of remembrance on Thursday, which included silent prayers, the release of doves and a declaration of peace.

Mr Matsui described nuclear weapons as an "absolute evil" while urging the world to put an end to them forever.

"To coexist we must abolish the... ultimate inhumanity that is nuclear weapons. Now is the time to start taking action," he said in his annual speech.

Later in the day, thousands of paper lanterns will be released on the city's Motoyasu River - symbolising the journey to the afterlife of those who died.

The anniversary comes as divisions in Japan rise over Mr Abe's bid to pass unpopular legislation to expand the country's military role worldwide.