Ceremonies held across UK to honour soldiers killed in battle in first world war and all those who have died in combat since. 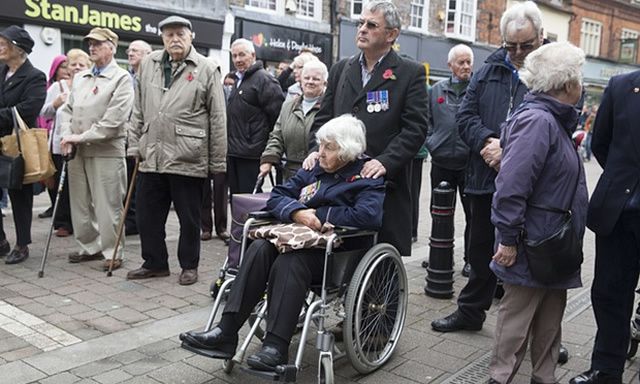 Ninety-seven years after the guns ceased firing on the western front during the first world war, Britain fell silent on Wednesday morning to remember its fallen soldiers.

With the first stroke of Big Ben, veterans and their families joined military chiefs at the Cenotaph in central London and observed a two-minute silence at the 11th hour of the 11th day of the 11th month, marking Armistice Day.

Among the Britons remembering, the widow and son of the murdered soldier Lee Rigby laid wreaths in Woolwich, south-east London. Jack Rigby and his mother, Rebecca, attended a service at St George’s chapel, where Fusilier Rigby’s name is engraved on a brass plaque.

A handwritten note on a wreath laid by his son read: “To daddy, me and mummy miss and always love you.” 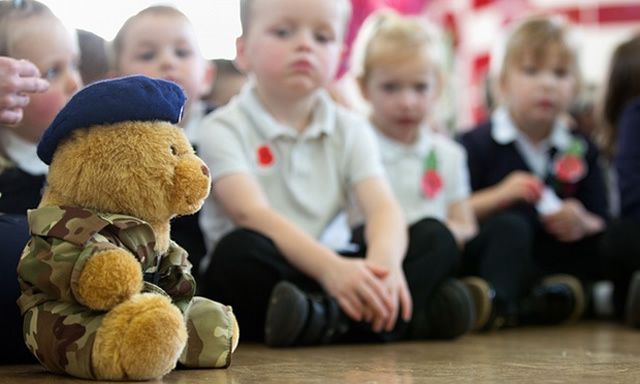 Millions of people in schools, shops, offices, railway stations and town halls across the UK took part in commemorations, remembering those killed or injured in conflicts since the beginning of the first world war.

Among the regiments who lined the street for the Whitehall ceremony were Gurkhas who had fought for Britain all over the world, while the singer Cerys Matthews read an extract from the Times from October 1915 about the deaths in battle of 41 only sons. Larry Roberts, 60, a veteran from South Shields who served with the Royal Green Jackets, looks at the sculpture Eleven ‘O’ One in Seaham, County Durham, before playing the bugle at a ceremony

Services were held at the National Memorial Arboretum in Staffordshire and military bases, as well as at community cenotaphs, as veterans, youth leaders and councillors together laid wreaths in front of assembled local residents, many of whom had poppies pinned on to their lapels, representing the flowers that grew on the otherwise barren battlefields of northern France and Flanders.

London ambulance staff ceased using sirens for half an hour around 11am when responding to emergency calls, “where safe and possible” as a mark of respect.

The Queen observed the two-minute silence privately at Buckingham Palace, remembering the war dead with her family. 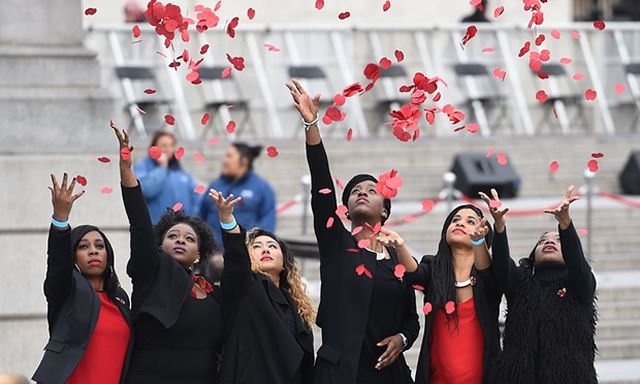 Asim Hafiz, imam for the Armed Forces Muslim Association and Islamic adviser to the British armed forces – who on Wednesday became the first Muslim chaplain to lead a remembrance ceremony – said: “The poppy appeal celebrates the selfless sacrifice of all our ancestors, who were willing to make the ultimate sacrifice in defence of our nation. It does not belong to any group, it belongs to all of us, and should be celebrated by everyone.”

The Royal British Legion held its annual Silence in the Square event in Trafalgar Square, with songs from the London Community Gospel Choir, as well as a sombre reading by actor Miranda Raison of the poem Remember, while onlookers were invited to place poppy petals in the fountains in the shadow of Nelson’s Column.

Helen Hill, from the Royal British Legion, said: “The two-minute silence is a rare moment for the nation to stand together and reflect upon the human cost of conflict. It’s vital that people of all ages understand the importance of remembering those who have made the ultimate sacrifice defending the freedoms we enjoy today.” 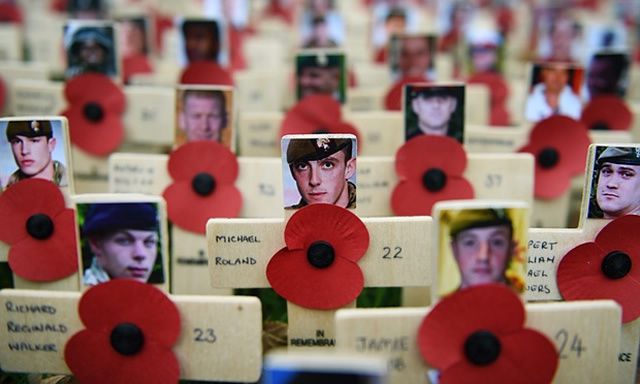 She added: “Silence in the Square is such a great event because it provides the public with a collective place to come together and participate in the two-minute silence in whatever way they feel most comfortable.” The two-minute silence is observed at the Cenotaph monument in George Square, Glasgow

Heads were bowed at the Field of Remembrance in the grounds of Westminster Abbey, as crowds paid their respects to tiny wooden crosses marked with poppies, which made up part of the 120,000 tributes – also in Cardiff, Belfast, Gateshead, Edinburgh, Inverness and Lydiard Park near Royal Wootton Bassett in Wiltshire – planted by hundreds of volunteers across the UK. 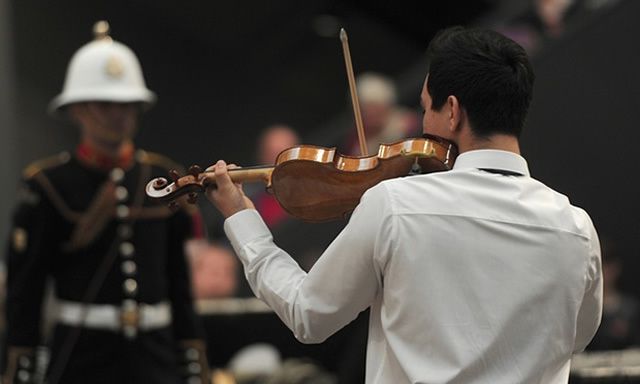 The Last Post was sounded by a bugler from the band of the Royal Marines at the Imperial War Museum in London, where a recital was also played on a violin made from sycamore and pine trees that grew in the former battlefields on the western front. 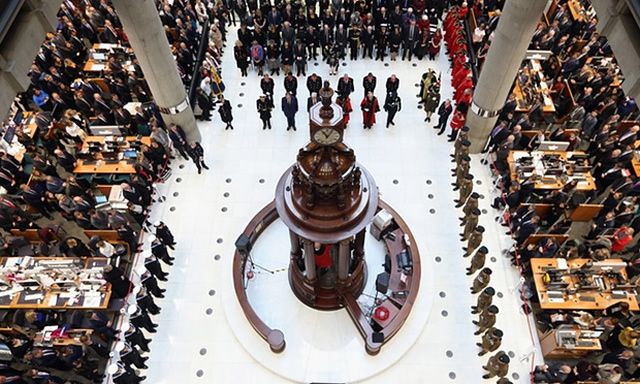 On the other side of the capital, Chelsea Pensioners observed the two-minute silence at Lloyd’s of London, where a ceremony was held on the trading floor.

A lone bugle sounded in the Brecon Beacons in south Wales, while veterans and members of the public gathered at the Scott Monument in Edinburgh city centre for a reading from Laurence Binyon’s poem For the Fallen.

Later on Wednesday, 19 British veterans are to be presented with the Légion d’honneur, France’s highest distinction, for their role in liberating France during the second world war. The medals will be presented by the French ambassador, Sylvie Bermann, at a ceremony at her residence in Kensington. Bermann said: “I feel privileged and incredibly moved to award these veterans with France’s highest distinction, which is our way of thanking them for their tremendous service to our country in the second world war.

“Just as today we remember the fallen of the first world war, so we shall never forget the courage of those who fought for France’s liberation over 70 years ago. To them France owes its freedom.”