Hitler’s closest companion, the architect of Germany’s wartime ‘armaments miracle,’ refashioned himself as a postmodern celebrity. 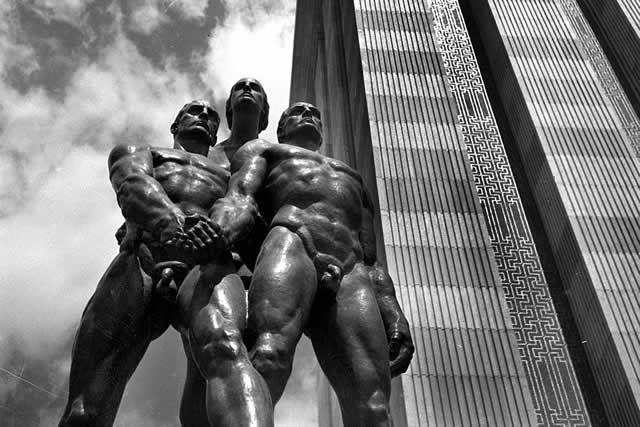 Just after midnight on Oct. 1, 1966, Albert Speer, the former armaments minister of the Third Reich, walked free from Spandau jail. Barely acknowledging Margarete, his long-suffering wife, the mother of his six children and the once-proud bearer of a Nazi award for fertility, Speer faced the flashbulbs and cameras of the world’s media from the back seat of a luxurious black Mercedes provided for the occasion by an old industrialist friend. Condemned by the Nuremberg Tribunal for war crimes and crimes against humanity, Speer was saved from the death penalty by an artful defense that separated him from the other Nazi ogres in the dock. He would spend the last 15 years of his life burnishing his image as “the good Nazi.” After three best-selling books and lucrative interviews with Der Spiegel and Playboy, among others, he died in London on Sept. 1, 1981, attended rather conspicuously by a beautiful young mistress, after a long morning of interviews with the BBC and dinner with the historian Norman Stone. Hitler’s closest companion, the architect of Germany’s wartime “armaments miracle,” had seized his time in the spotlight. He had refashioned himself as a postmodern celebrity.

Already at Nuremberg, Speer had presented himself as a penitent prophet of a new age of technocracy. He used his closing statement in the dock to warn the world that the only forces that could “prevent unconfined engineering and science from completing the work of destroying human beings” were “individual freedom and self-confidence.” In the aftermath of Hiroshima and Auschwitz, the conjunction of technology and power had become an obsessive theme of cultural commentary, one that offered Speer two advantages. It put Allied strategic bombing alongside him in the dock while distracting attention from more specific questions about his personal responsibility for the deportation of tens of thousands of Jews from Berlin and the murderous exploitation of concentration-camp labor.

Paradoxically, while muddying the question of personal responsibility, Speer succeeded in crafting an image of himself as the indispensable mastermind of the Nazi war economy. Under his command from February 1942, production of tanks and fighter aircraft soared, and pathbreaking technical innovations such as the V2 rocket poured off Nazi assembly lines. In 1945, before he was indicted, he seriously imagined playing a leading role in postwar reconstruction, even styling himself as a pioneer of European integration for having promoted the outsourcing of production to his collaborator friends in Vichy France. At Nuremberg this was his defense: How could anyone put him, this forward-thinking, broad-minded, modern individual, in the same class as the drug-addled and rapacious Goering or an odious anti-Semitic creep like the publisher of Der Stürmer, Julius Streicher?

It was an image that, for the first decades after the war, dominated the historiography. But from the 1980s onward the edifice began to crumble. Doubts were raised about Speer’s denials of complicity in the Holocaust. In fact, it was shown, he had been involved both in the Aryanization of the German capital and the genocidal food allocation and labor-recruitment programs of 1942-43; and in 1944 he and his staff worked daily with the SS to select slave labor from the hundreds of thousands of Hungarian Jews arriving on the ramp at Auschwitz. In 1995, Gitta Sereny devoted a laborious but fascinating book to unpicking Speer’s struggle with the truth, including his efforts to deny that he was present on Oct. 6, 1943, in Posen when Himmler initiated the assembled Gauleiter into the horrific secrets of the extermination program. In the past 15 years a cohort of economic historians have dismantled the foundation of the Speer myth, showing how the “armaments miracle” was in fact an ordinary industrial process gorged on the violent mobilization of labor, raw materials and capital from all over Europe and wrapped in the magic cape of Goebbels’s propaganda.

Martin Kitchen’s “Speer: Hitler’s Architect” does a workmanlike job of converting this revisionist historiography into biographical form. The result is a devastating portrait of an empty, narcissistic and compulsively ambitious personality. As Mr. Kitchen chronicles Speer’s acquisitive rise to power and his compulsive self-fashioning, he invokes Robert Musil’s “The Man Without Qualities.” Such high cultural references would, one fears, have suited Speer all too well. Reading the shopping lists of luxuries that Speer ordered from Spandau jail, including a Group One Dunhill pipe, foie gras with truffles, Beluga caviar and a Jaeger-LeCoultre watch, one is tempted to invoke instead “American Psycho,” Bret Easton Ellis’s deathless evocation of a murderous, product-obsessed Wall Street yuppie. Even Speer’s high-cultural aspirations, his patronage of classical musicians and his dabbling in religious profundity had a shallowness that haunted those who knew him well.

The Speer myth was not the creation of Speer alone. Mr. Kitchen’s study is at its best in tracing the networks that helped to create him. As a young architect in the 1920s, Speer benefited from the support of Heinrich Tessenow, a noted architect and an advocate of arts and crafts. Having started life as an apolitical aesthete, Speer was swept up in the dynamic of Hitler’s movement during the disastrous first winter of the Great Depression, joining the party in March 1931. With the advent of Hitler’s regime, modesty was out of style, and Speer shifted allegiance to the luxury designer Paul Ludwig Troost. His first big break came first with the commission for the remodeling of Goebbels’s villa in Berlin and the renovation of Hitler’s offices in Berlin. This brought Speer into daily contact with the Führer, who was taken with his youthful energy and charisma. His design for the enormous party rally ground at Nuremberg and the commission for the pompous new Reich Chancellery cemented Speer’s place at Hitler’s side. In January 1937, Speer and his Führer began planning their magnum opus, the reconstruction of Berlin as Germania, the capital of a new German Empire. It was to feature a triumphal monument more than 300 feet high, large enough to straddle Napoleon’s Arc de Triomphe, and a Great Hall 16 times the size of St. Peter’s in Rome, designed to accommodate 180,000 delegates.

Speer’s plans for Berlin provided for not just the official apparatus of the Third Reich. He also made sure to designate luxurious new office space for Germany’s corporations, including the electrical engineering giant AEG and the chemicals super-conglomerate IG Farben. Dynamic technocrats who worked the angles between business, the Nazi Party and the state apparatus were key figures in Hitler’s regime. Fritz Todt, the engineer-architect of the Autobahn, established himself as an indispensable go-between. It was Todt whom Hitler picked in March 1940 to be his wartime minister for armaments and ammunition. Speer, meanwhile, took charge of building the capital’s air-raid shelters and armaments factories. When Todt was killed in mysterious circumstances in the crisis winter of 1941-42, it was Speer to whom Hitler turned. With the Wehrmacht stuck deep in snowbound Russia and war with the U.S. looming in the West, it was now Speer’s task to rally German industry to the war effort.

After 1945, the German business community constructed its own myth of innocence. But as we know from the library of histories produced by the slave-labor litigation of the 1990s, it is hard to think of any major industrial corporation that did not employ forced foreign labor. A shockingly large proportion even contracted with the SS for the use of concentration-camp labor, including Jewish camp inmates. Nor were the businessmen merely narrow-minded profit maximizers “doing their job.” As part of Speer’s organization, they actively shaped and mobilized the German economy for war. Most were nationalists committed to German victory. Some were Nazi ideologues. They all had reason to fear Stalin’s Soviet Union. But the system that Speer organized melded these impulses with a more abstract ethic: Its participants lived and died by the standard of “performance” (Leistung). Statistics and production records were their religion, technological improvement their mantra and disruptive innovation their magic. The obsession with short-term Leistung displaced any wider consideration of the strategic prospects for Germany in a global war, let alone any ethical examination of the methods that were used. The armaments miracle became an end in itself.

Seeking to reconcile what she witnessed at the Eichmann trial in Jerusalem in 1961 with her theory of the modern human condition, Hannah Arendt coined the controversial phrase “the banality of evil” to capture the thoughtlessness and incoherence of the Nazi personality. According to Arendt’s archive, Speer’s newly released Spandau diary was one of the last books that she read before her death in December 1975. Would she have seen Speer as a more telling instance of Nazi banality than Eichmann, one wonders? Or was Speer an example of something even more troubling, a leading perpetrator endowed, unlike Eichmann, with the ability to interpret his behavior in terms of larger social and technical forces, a disturbingly persuasive “thought leader” who helped to shape the myths of industrial and technological modernity—myths that both rationalized his own role and saved him from the hangman’s noose?

—Mr. Tooze, director of the European Institute at Columbia, is the author of “The Deluge: The Great War and the Remaking of the Global Order, 1916-1931.”