Viktor Brack was born in Haaren on 9th November, 1904. He joined the Nazi Party and the Schutzstaffel (SS) in 1929. He was eventually promoted to the rank of SS Standardtenfuehrer (Colonel). 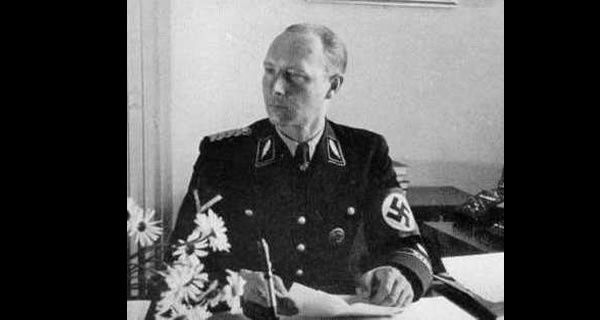 In 1936 he served in the Chancellery of the Führer in Berlin under Philip Bouhler and supervised the operation of Office 2 (Amt 2).

In August, 1939 the Reich Committee for the Scientific Registration of Serious Hereditary and Congenially Based Diseases was established. Euthanasia was employed to deal with the incurably insane or the physically handicapped. Karl Brandt and Philip Bouhler were put in charge of this programme that Adolf Hitler said would result in the "racial integrity of the German people."

The euthanasia programme was known as T-4 and began in autumn 1939. According to Ulf Schmidt, the author of Karl Brandt: The Nazi Doctor, the first person to die as a result of the T-4 programme was Gerhard Kretschmar, a child born on 29th February 1939. Documents show that the parents, who lived in the south-eastern region of Saxony, petitioned Adolf Hitler asking for the child to be "put to sleep". Brandt claimed "it was a child who was born blind, an idiot - at least it seemed to be an idiot - and it lacked one leg and part of one arm."

Carbon monoxide gas was selected as the means of death and several asylums were equipped with chambers for this purpose. Between October 1939 and August 1941, T-4 killed over 70,000 people. As the Second World War progressed the euthanasia program was used to exterminate people said to be biologically inferior, such as Jews, Poles, Russians and Gypsies.

In November 1940, Brack was promoted to the grade of SS Oberführer (Senior Colonel) and was given responsibility for building concentration camps in Poland and was involved in negotiations about the Final Solution.

In 1941 Heinrich Himmler ordered him to talk with Karl Brandt and Philip Bouhler to find out a way of sterilizing young and strong Jews capable of labour for use in the German war effort. The idea was to develop a method by which the victim could be sterilized without being aware of the process. In March 1941, Brack reported back to Himmler about the possibility of using X-rays to solve this problem.

On 20th May 1945 Viktor Brack was arrested by the American Counter-Intelligence Corps (CIC). He said his name was Hermann Ober and it was several weeks before the CIC realized they had one of Hitler's top officials in custody. .

Brack was one of the defendants in the trial of 23 SS physicians and scientists that began at Nuremberg on 9th December, 1946. Alongside him stood Karl Brandt, another senior member of the euthanasia programme.

Dear Reichsführer, among 10 millions of Jews in Europe, there are, I figure, at least 2-3 millions of men and women who are fit enough to work. Considering the extraordinary difficulties the labor problem presents us with, I hold the view that those 2-3 millions should be specially selected and preserved. This can however only be done if at the same time they are rendered incapable to propagate. About a year ago I reported to you that agents of mine have completed the experiments necessary for this purpose. I would like to recall these facts once more. Sterilization, as normally performed on persons with hereditary diseases is here out of the question, because it takes too long and is too expensive. Castration by X-ray however is not only relatively cheap, but can also be performed on many thousands in the shortest time. I think that at this time it is already irrelevant whether the people in question become aware of having been castrated after some weeks or months, once they feel the effects. Should you, Reichsfüuehrer, decide to choose this way in the interest of the preservation of labor, then Reichsleiter Bouhler would be prepared to place all physicians and other personnel needed for this work at your disposal. Likewise he requested me to inform you that then I would have to order the apparatus so urgently needed with the greatest speed.

I have just had an awful day. Viktor Brack has given an affidavit which is the most mendacious thing one can think of. I will grant him the benefit of stupidity, but such stupidity is dangerous. Previously I never would have believed this. But it is like that. Such stupidity is as unpredictable as madness! This man has testified and underwritten that the euthanasia problem is linked to the extermination of Jews in Poland and that this extermination was carried out with my approval. I still cannot find the right words. One - and especially I - have to be prepared for quite a lot, and every day there are little problems. But I was not quite prepared for such heavy stuff. Now I have spoken with S (Robert Servatius). Brack knows that his affidavit is false. His lawyer came to me and to S (Robert Servatius) in order to state this officially. But what is said cannot be unsaid. First it goes into the world! And I can never quite capture it again!"

For the next weeks I am standing in front of the world with a face which, once looked at, is nothing but dreadful. I must withdraw into myself very much to appear freely! Even Brack's defence lawyer came to me and said that he will do what he can. But how little does this mean afterwards! Tomorrow [the news] races throughout the world that I am standing in the middle of it all, with a really devilish and grotesque face. That is disgusting. Brack himself has said that `he had become soft' when he signed the report! Is this now consolation? It is quite dreadful how humans can lose control of themselves for pomposity.. There I have no words any more. Because I am integrated into all this and powerless! I am feeling like I wrote three pages earlier, if I am accused in front of the world that I had starved children to death! I then feel as if I would hear this from Karl-Adolf. It revolts inside so that I could explode - and then exhausted I let my arms hang and fall: powerless! I am just powerless ... We all are. At such times you have to reach inside yourself, otherwise there is only one way out. So I reach into myself, and there I find a word of comfort, a feeling, a wish! If I nurture it, it comes to life - and so I find I can fight through and find myself again.'