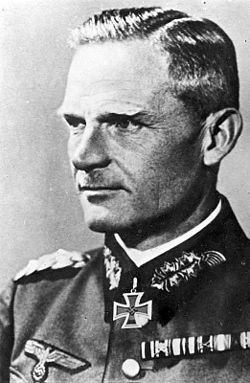 General Karl -Heinrich held many posts in Nazi Germany. From November 1938 to June 1940 he served as Quartermaster-General on the Army General staff. For six months after that he was Chieft of the Franco-German Armistice Commission. When Russia attacked Germany in the East, Stuelpnagel was transfered to the Eastern Front. He stayed there untill 1942 when he was transfered back to Paris in 1942 to be the Military Governor for Occupied France. He stayed in Paris from 1942-1944 and played a role in the conspiracy against Hitler.

While Colonel Stauffenberg led the failed coup attempt in Berlin on July 20, 1944, Stuelpnagel led a more successful insurrection in Paris.

On the night of July 20th, German army troops conducted a lightning campaign against SS and Gestapo strongpoints throughout Paris, arresting virtually the entire security network without a shot being fired. But failure to prevail in Berlin, and a concrete threat by Admiral Theodor Krancke to use his 2,000 Marines to free the SS and Gestapo officials caused Stuelpnagel to concede defeat and call off his July 20th coup in Paris.

Except for Lt.-Colonel Caesar von Hofacker and Major Hans-Otfried von Linstow, the resourceful Stuelpnagel was able to shield all the other conspirators on his staff from being arrested and executed.

Stuelpnagel voluntarily returned to Germany to stand trial with the other conspirators. Along the way, he stopped in a village near Verdun to visit the graves of his fallen comrades from World War I. There he tried to commit suicide by shooting himself in the head, but is instead blinded. He was revived at a hospital and brought back to Germany where he was sentenced to death and hanged two weeks later.