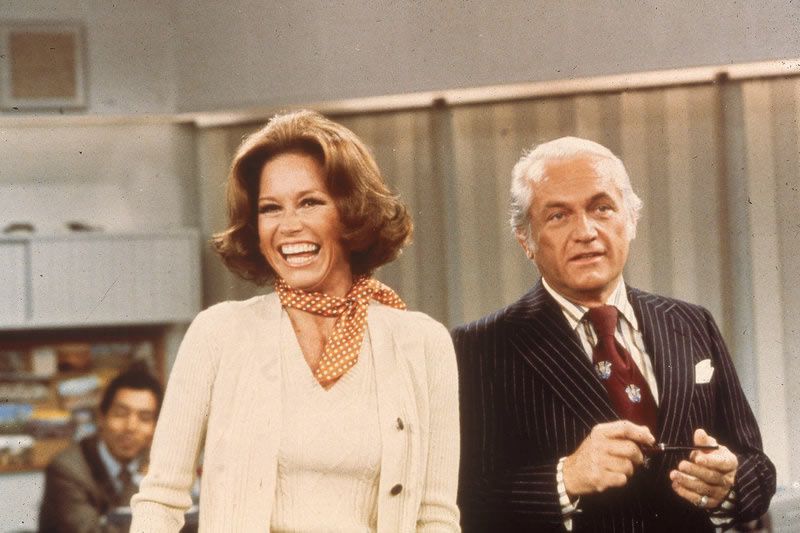 Mary Tyler Moore played the girl who could turn the world on with her smile. The actress is beloved for two TV roles: the single young professional Mary Richards on The Mary Tyler Moore Show, and before that, the earnest homemaker Laura Petrie on The Dick Van Dyke Show.

Moore died Wednesday at the age of 80, her longtime representative told NPR.

"Today, beloved icon, Mary Tyler Moore, passed away at the age of 80 in the company of friends and her loving husband of over 33 years, Dr. S. Robert Levine," Mara Buxbaum said in an email. "A groundbreaking actress, producer, and passionate advocate for the Juvenile Diabetes Research Foundation, Mary will be remembered as a fearless visionary who turned the world on with her smile."

In 1995, 25 years after The Mary Tyler Moore Show first aired, the actress clearly recalled shooting the scenes for its memorable opening credits. "It was freezing cold," she told WHYY's Fresh Air. "It was in Minneapolis in January, I think. We didn't know what we were doing — we were just there to grab a lot of footage that shows a young woman's exuberance [over] being in a new city."

The final opening credits showed Moore's character tossing her hat in the air. With it, she's tossing out all the baggage of her last life and starting over in the newsroom of Minneapolis' WJM-TV. Moore plays Richards as young, polite and very determined. In the first episode, when crotchety news director Lou Grant, played by Ed Asner, asks Richards about her age and relationship status during a job interview, she challenges his line of questioning. "You've been asking a lot of very personal questions that don't have a thing to do with my qualifications for this job," she says.

"It was the most powerful moment in theater I've had, because she played it so beautifully," Asner told NPR in 2001. "The audience was going 'oh-goo-goo' at that moment." From 1961 to 1966, Moore played opposite Dick Van Dyke on The Dick Van Dyke Show. In 2011, Van Dyke told NPR he thought they had a bit of a crush on each other while filming the show

By the time Moore appeared in The Mary Tyler Moore Show, she was already an experienced comedic actor and producer. Her production company MTM Enterprises (formed with her second husband, Grant Tinker) was also responsible for the sitcoms Rhoda, The Bob Newhart Show and WKRP in Cincinnati.

Moore had learned her craft while playing homemaker Laura Petrie for five seasons on The Dick Van Dyke Show. Her chemistry with her on-screen husband, played by Dick Van Dyke, was so electric that CBS insisted her character had to be a single woman on her later show — the network didn't want viewers to think they had divorced.

Van Dyke cheerfully admitted this to NPR in 2011: "Around the second season, we would try to rehearse and begin to giggle for no reason. And a psychiatrist said, 'You have a crush on each other.' And I realized that's true! And I think it showed on the screen. I think that's why people thought we were really married because we had a wonderful connection."

Laura Petrie also wasn't the typical 1960s housewife people were used to seeing on TV. "Laura actually had opinions of her own," Moore said. "And while she was asserting herself, she also didn't make Dick Van Dyke look like a dummy. I mean, society's expectations at that point still said, 'Hey, wait a minute, lady, you only go so far here.' But I think we broke new ground." The character also wore capri pants in a time when skirts and heels were the height of TV fashion. Moore proved she could wear what she wanted and also sometimes take the comic lead to Van Dyke's straight man. She said she had always been a fan of the comedian Nanette Fabray, and she channeled Fabray to conjure up those trademark comic tears. "There was definitely a cracking in the voice and an inability to maintain a tone and a certain amount of verbal yodeling that took place," Moore said.

In her real life, the actress was not the single, free-wheeling Mary Richards that America embraced. The real Mary was married by the time she was 18. She was born in Brooklyn, N.Y., but she grew up in Los Angeles with a mother who battled alcoholism, a problem that later afflicted Moore and both her siblings.

"I probably never was really out-and-out drunk," Moore recalled. "And I certainly never drank during the daytime, but I wasted a lot of my time and I forgot a lot because I didn't remember much of what happened the night before."

Moore channeled some of that unhappiness for her role as a grieving mother in 1980's Ordinary People, a performance that earned her an Academy Award nomination. To this day, however, it's her comedy that endures. In downtown Minneapolis, there's a statue of her as Mary Richards twirling her cap — a moment of hope and promise, frozen in time.