MILAN, April 29 - Italian patriots executed Benito Mussolini yesterday, and today a howling mob is kicking and spitting on his body, lying in the center of this city where Italian Fascism was born. 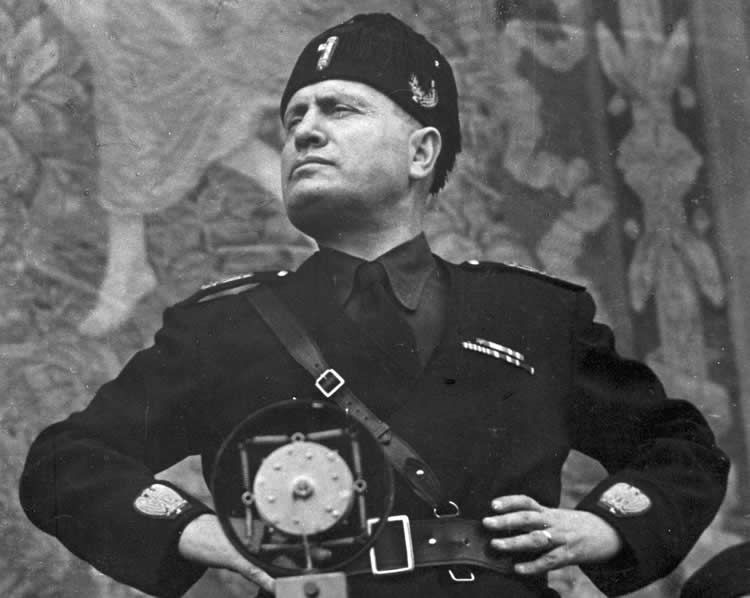 Mussolini’s face wears a disdainful snarl. He died shouting “No! No!” to a firing squad which took his life, and that of his mistress, near the village of Dongo Lake Como at 4:10 P.M.

The body was brought by truck to Milan and dumped in the city’s square.

(Years ago Mussolini had walked the streets of that square as a reporter for the newspaper Il Popolo d’Italia. Later, with French money, he purchased the newspaper.)

A bullet penetrated Mussolini’s bald head through the left forehead and passed entirely through it, tearing out part of the skull above and behind the right ear.

The brains which took Fascist Italy into the war ooze onto the filth of a dirt plot in the center of Milan.

Mussolini was 61 years old. He was born July 29, 1883, at Dovia di Predappio, Italy, and was christened Benito Amilcare Andrea.

Along with Mussolini, the patriots killed his mistress, Clara Petacci, and 16 other Fascists, many of them members of his Cabinet.

The bodies of all were brought to Milan, which American 5th Army troops entered today. A mob of more than 5,000 persons immediately set upon the corpses marking the final end of Fascism which carried Italy to its doom.

All bodies were strewn about a small area. A few patriot guards tried to hold the crowds back, but the guards were shoved back so that they stepped on the bodies. 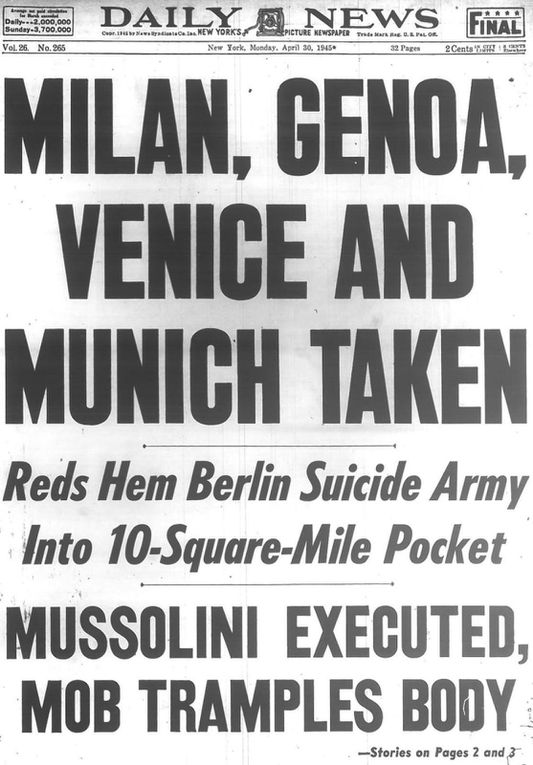 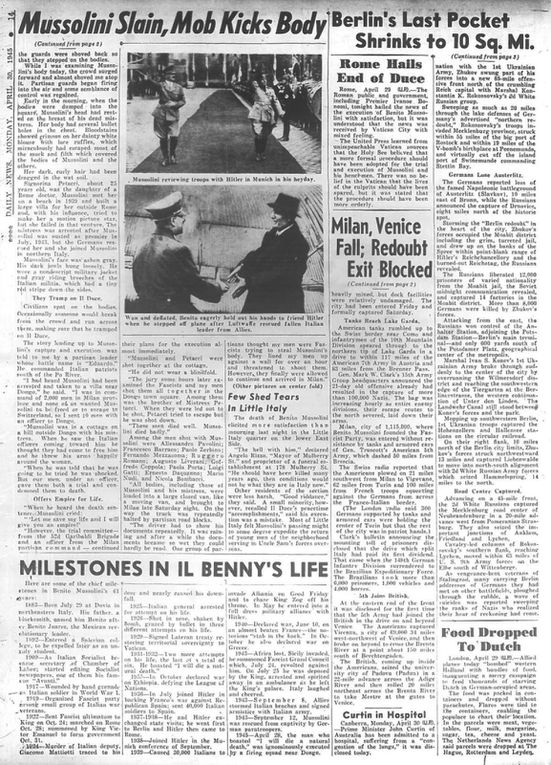 While I was examining Mussolini’s body today, the crowd surged forward almost shoved me atop it. Partisan guards began firing into the air and some semblance of control was regained.

Early in the morning, when the bodies were dumped into the square, Mussolini’s head had rested on the breast of his dead mistress. Her body had several bullet holes in the chest. Bloodstains showed crimson on her dainty white blouse with lace ruffles, which miraculously had escaped most of the muck and filth which covered the bodies of Mussolini and the others.

Her dark, curly hair had been dragged in the wet soil.

Signorina Petacci, about 25 years old, was the daughter of a Rome doctor. Mussolini met her on a beach in 1939 and built a large villa for her outside Rome and, with his influence, tried to make her a motion picture star but she failed in that venture. The mistress was arrested after Mussolini was ousted as premier in July, 1943, but the Germans rescued her and she joined Mussolini in northern Italy.

Mussolini’s face was ashen gray. His dark jowls hung loosely. He wore a nondescript military jacket and gray riding breeches of the Italian Militia, which had a tiny red stripe down the sides.

They Tramp on Il Duce.

Civilians spat on the bodies. Occasionally someone would break from the crowd and run across them, making sure that he tramped on Il Duce.

The story leading up to Mussolini’s capture and execution was told to me by a partisan leader whose battle name is “Eduardo.” He commanded Italian patriots south of the Po River.

“I had heard Mussolini had been arrested and taken to a villa near Dongo,” he said. “I was in command of 2,000 men in Milan province and none of us wanted Mussolini to be freed or to escape to Switzerland, so I sent 10 men with an officer to Dongo.

“Mussolini was in a cottage on a hill outside Dongo with his mistress. When he saw the Italian officers coming toward him he thought they had come to free him and he threw his arms happily around the woman.

“When he was told that he was going to be tried he was shocked. But our men, under an officer, gave them both a trial and condemned them to death. n this April 29, 1945 file photo, dead bodies of fascists hang from the roof at the Piazzale Loreto, Milan, Italy. Benito Mussolini's body is second from left, his mistress Claretta Petacci third from left

“When he heard the death sentence, Mussolini cried:

“‘Let me save my life and I will give you an empire!’

“However, the trail committee - from the 52d Garibaldi Brigade and an officer from the Milan partisan command - continued their plan for the execution almost immediately.

“Mussolini and Petacci were shot together at the cottage.

“He did not wear a blindfold.

“The jury some hour later examined the Fascists and my men shot them all together in the Dongo town square. Among them was the brother of Mistress Petacci. When they were led out to be shot, Petacci tried to escape but he was shot down.

“All bodies, including those of Mussolini and his mistress, were loaded into a large closed van, like a moving van, and brought to Milan late Saturday night. On the way the truck was repeatedly halted by partisan road blocks.

“The driver had to show his documents repeatedly. It was raining and after a while the documents became so wet they could hardly be read. One group of partisans thought my men were Fascists trying to steal Mussolini’s body. They lined my men up against a wall for over an hour and threatened to shoot them. However they finally were allowed to contribute and arrived in Milan.”

Originally published by the Daily News on April 30, 1945. This story was written by James E. Roper