The 96-year-old "is no longer capable of following a trial", says a court in Germany, after frequent delays due to his ill health. A mass murder case against a 96-year-old medical orderly at Auschwitz has been dropped because he has Alzheimer's and is too ill to follow court proceedings.

Wheelchair-bound Hubert Zafke was on trial at a court in Germany charged with allegedly being an accessory to 3,681 murders at the concentration camp in Nazi-occupied Poland.

Victims' representatives have criticised the decision, saying that repeated delays in proceedings have robbed them of a chance of justice in one of the last high-profile Nazi prosecutions. 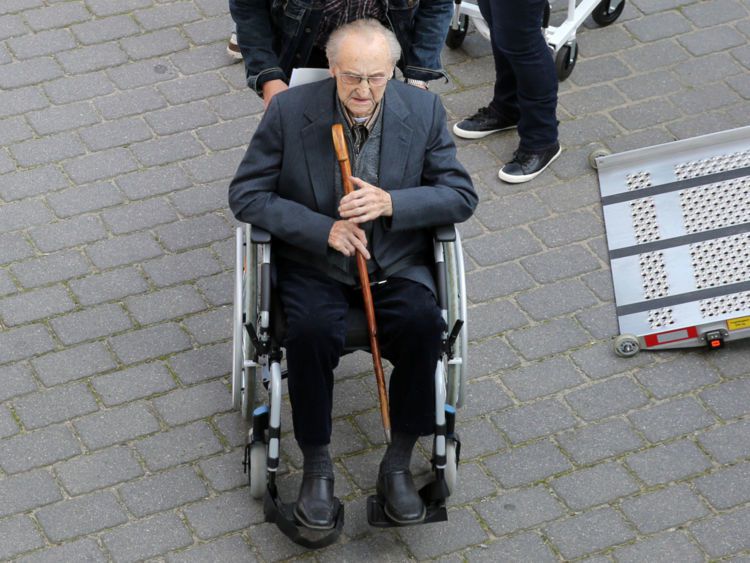 Hearings were repeatedly postponed due to Mr Zafke's poor health

Thomas Walther, a lawyer for two sons of a woman murdered at Auschwitz, said it "leaves behind co-plaintiffs with fresh wounds that won't heal, dealt to them by the German justice system, just like the wounds that SS men such as Zafke dealt them seven decades ago".

The trial, which began in February 2016, centred on a one-month period in 1944 when 14 trains carrying prisoners arrived at Auschwitz-Birkenau, where about 1.1 million people, mostly European Jews, died between 1940 and 1945.

But proceedings have suffered frequent delays and postponements due to Zafke's failing health.

"Because of his dementia he is no longer capable of following a trial," court spokesman Carl Christian Deutsch said in a statement, adding that the decision was backed by two independent psychiatrists, who found Zafke could not follow a discussion or retain information "for more than a few minutes".

Zafke denied being at the death camp when first questioned by German prosecutors in 2014, but he later accepted he had worked there but did not know about the gas chambers and crematoria until after the end of the war.

Zafke was the fourth former concentration camp worker to be tried in Germany in recent years, after John Demjanjuk, Oskar Groening and Reinhold Hanning last year.

The trio were all convicted of complicity in mass murder on a new standard of evidence - that it was sufficient to work at a death camp to be prosecuted, even without proof of a link to specific deaths.