Adolf Hitler's phone directory which contains details of some of the key Nazi figures has sold for £33,000 - twice its estimate at auction.

The address book was found in Hitler's Reich Chancellery at the end of the Second World War by a British war crimes investigator, Captain John Hodgewho was a a British Grenadier Guards officer.

It came up for auction 72 years later and was sold today by Henry Aldridge and Son of Devizes in Wiltshire, for £33,000.

The directory contains the names, addresses and telephone numbers infamous members of the Nazi party. 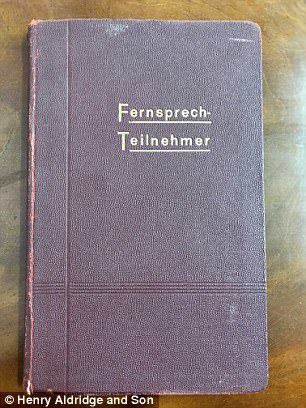 The book on the left entitled Fernsprech-Teilnehmer, which translates to 'telephone subscribers', and the inside showing the contact details The Third Reich book was recovered in Berlin at the end of World War Two by Captain John Hodge who was a British Grenadier Guards officer and is expected to fetch up to $20,000. His signature can be seen on this letter to the War Crimes Investigation Unit There is one notable omission from the phonebook and that is Adolf Hitler, pictured here The leather, cloth-bound book belonging to Hitler is being put up for auction by Henry Aldridge and Son, which is based in Devizes, Wiltshire

Among the 200 people listed are SS monster Heinrich Himmler, propaganda chief Joseph Goebbels and head of the Luftwaffe Hermann Goering.

Others include Hitler’s deputy Rudolf Hess – who bizarrely flew to Scotland in 1941 and was taken prisoner – Albert Speer, the Nazi who apologised at the Nuremberg war trials, and Reinhard Heydrich, main architect of the Holocaust.

Hans Frank, who ran occupied Poland under a murderous reign of terror, is also listed as is Joachim von Ribbentrop, who played a key role in starting the war. Hitler’s personal bodyguard and pilot are included as well.

Remarkably, a folded-up letter found in the 6in by 4in book has survived. It was written by the private secretary of Goebbels rejecting a request for his autograph because he was too busy.

The black, leather-bound book was found in a desk drawer in the Reich Chancellery in 1945 by Captain John Hodge, who was later part of the war crimes investigation unit and was almost killed arresting SS guard Heinrich Hornetz at his home near Frankfurt in 1946.

During the arrest, the Nazi’s wife ran out of the house screaming ‘English pigs’.

Capt Hodge was hit in the leg but managed to flee with his prisoner.

Both he and the address book survived, and it is to be sold at auction tomorrow through Henry Aldridge and Son of Devizes, Wiltshire.

Auctioneer Andrew Aldridge said: ‘This is a unique piece of history that offers both historians and collectors access to a previously unseen amount of information relating to the highest echelons of one of the most evil regimes in modern history. It really is a who’s who of evil.

'You pick a bad guy and he is in there. The only person of note who is missing is Adolf Hitler.

‘We don’t know for certain who it belonged to but it was clearly the property of a very senior Nazi, possibly Goebbels’s secretary.

‘This book is being sold by the family of someone who dedicated a chunk of his career to hunting these individuals.

‘On a personal note, my grandfather was kept prisoner by the Nazis at Lamsdorf, Poland, before he escaped back to England and I found it fascinating that the head of Nazi government in Poland, Hans Frank, is listed.’