The men who planned, launched and prosecuted Japan's bloody war in Asia and the Pacific - and are still revered at national shrine A general and commander of the Kwantung Army in China, Tojo went on to join the wartime cabinet and served as prime minister between October 1941 and July 1944.

A strong advocate of the Tripartite Pact with Nazi Germany and Italy as Army Minister, he stepped up the war in China. As prime minister, he was held directly responsible for the unannounced attack on the US fleet at Pearl Harbour.

Tojo attempted to commit suicide before his arrest but survived, and was put on trial before the International Tribunal for the Far East for war crimes and found guilty on seven counts, including unprovoked war and ordering, authorising and permitting inhumane treatment of prisoners of war. Instrumental in the occupation of Manchuria, Doihara rose to become chief of the intelligence services in the puppet state that Japan knew as Manchuko.

He earned the sobriquet "Lawrence of Manchuria" before joining the Supreme War Council in 1940. His last overseas postings were to Malaya and Singapore before returning to Japan shortly before the surrender.

Found guilty on eight counts at the war crimes trial in Tokyo, he was also executed on December 23, 1948. Called out of retirement in 1937, General Matsui was made commander of the Shanghai Expeditionary Force and, once Chinese defences in the city had collapsed, ordered an advance on the capital of Nanking.

The battle for the city took three days; the massacre that followed the capitulation on Dec 13, 1937, claimed the lives of as many as 200,000 civilians, according to documents submitted as Matsui's trial.

He went back into retirement in 1938 but was arrested at the end of the war, admitted in court to the scale and violence of the "Rape of Nanking" and was executed in Dec 1948.

After serving as chief of staff of the Kwangtung Army in Manchuko, Kimura was promoted to vice minister of war under Hideki Tojo. Given responsibility for planning strategy in the war with China and the Pacific War, Kimura joined the Supreme War Council in 1943 and was instrumental in prosecuting the conflict.

He was later made commander in chief of the Burma Area Army but was unable to resist the British advances.

He was charged with planning the strategy of the war, and the war crimes tribunal also found Kimura guilty of failing to prevent atrocities against prisoners of war, including military and civilian prisoners put to work on the Burma railway.

Found guilty on seven counts, he was executed in Dec 1948. A career diplomat, Hirota served as minister to the Netherlands and as ambassador to the Soviet Union for four years until 1932. He became foreign minister the following year and prime minister in 1936.

The three-way Anti-Comintern Pact was signed with Germany and Italy during his time as Japanese leader but he was replaced in 1937.

During another spell as foreign minister, he opposed the escalation of the conflict in China, until he was forced out of office, and led unsuccessful negotiations to preserve peace with the Soviet Union in 1945.

Hirota offered no defence to the Tokyo war crime trial and was found guilty on three charges, including plotting wars of aggression. Born into a samurai family, Itagaki served as military attache in China in the 1920s before joining the Imperial Japanese Army General Staff in 1926.

He headed the intelligence service in the Kwantung Army and helped to plan the 1931 Mukden Incident, which was used to justify increased military operations in China. He led a number of front-line units in China before being appointed War Minister in 1938.

He eventually surrendered Japanese forces in south-east Asia to Admiral Louis Mountbatten in Singapore on Sept 12, 1945. Found guilty of escalating the war and the inhumane treatment of prisoners, he was executed in Dec 1948. A military attache to Germany for three years from 1923, Muto joined the Imperial Army General Staff Office and was head of military intelligence of the Kwangtung Army at the time of the Marco Polo Bridge Incident in 1937, an attack on Chinese forces widely seen as the starting point of Japan's second war against China.

Muto oversaw Japanese military operations across central China and was charged with leading troops during the worst excesses of the Nanjing Massacre.

He was director of military affairs at the time of the Pearl Harbour attack, and he later commanded troops on Sumatra and the Philippines, where he was subsequently accused of carrying out a campaign of slaughter and torture of Filipino civilians, prisoners of war and civilian internees. 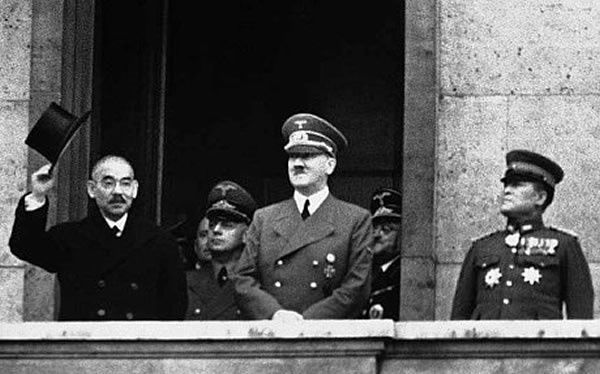 Yosuke Matsuoka raising his hat next to Hitler

As a diplomat, Matsuoka is best remembered for his defiant 1933 speech to the League of Nations that ended Japan's involvement in the organisation.

One of the architects of the Tripartite Pact with Germany and Italy, he became foreign minister in 1940 and signed the Soviet-Japanese Neutrality Pact in Moscow in April 1941.

He subsequently became a fervent supporter of Hitler's request that Japan attack the Soviet Union at the same time as Germany launched its attack in Europe, although his proposals fell on deaf ears in the cabinet.

Replaced as foreign minister, he spent the rest of the war in retirement. He died in Sugamo Prison in June 1946, before his trial on war crimes charges could be heard. A career naval officer, Admiral Nagano served as head of the Imperial Japanese Navy General Staff between April 1941 and Feb 1944. A descendant of a samuri family, he served as military attache to the United States and was a representative of Japan at the London Naval Conference of 1930 and again in 1935, when Japan withdrew in protest at being refused naval parity with Britain and the US.

Appointed chief of the Imperial Naval General Staff, Nagano opposed war with the US and argued against the attack on Pearl Harbor, but was over-ruled. Replaced in 1944 after losing the confidence of the cabinet, he was arrested at the end of the war but died of a heart attack in Sugamo Priosn before his war crimes trial concluded. A stalwart of the pre-war foreign ministry, Shiratori served variously as ambassador to Italy, Sweden and Finland.

A fervent advocate of military expansionism and Japan's alliance with Germany and Italy, he became the key adviser to the foreign minister in 1940 and was found guilty at the Tokyo war crimes trial of conspiring to wage aggressive war.

Sentenced to life imprisonment, he died of cancer in prison in 1949. A baron, son of a samurai family and prominent nationalist before the outbreak of war in the Pacific, Hiranuma rose swiftly in the Ministry of Justice and was named vice minister if justice in 1911.

A crusader against corruption in politics, he was also outspoken against foreign influence on Japanese society. A supporter of the military's expansion in Manchuria, Hiranuma called for Japan's withdrawal from the League of Nations and was appointed prime minister in January 1939.

He later served as home minister and opposed the alliance with Germany and Italy. After resigning from the cabinet in 1941, he served as a senior adviser to Emperor Hirohito for the remainder of the war.

Convicted of war crimes and sentenced to a life term, Hiranuma was paroled in 1952 but died six months later. A graduate of the Imperial Japanese Army Academy, Koiso served in a number of postings in China before becoming involved in politics.

Named as vice minister of war in 1932 and simultaneously serving as chief of staff of the Kwantung Army, he then took over command of the Chosen Army in the Japanese-controlled Korean peninsula.

Stepping down from active duty, Koiso became minister of colonial affairs in 1939 and served as Governor-General of Korea from 1942 to 1944 - where he was known as The Tiger of Korea.

Koiso became prime minister in July 1944 after all the rival factions were unable to agree on a replacement to Gen Tojo. A token leader, Koiso was not permitted to participate in military decisions and, thanks to the high number of hawks in the cabinet around him, had little choice but to continue the war.

Charged with war crimes after Japan's surrender, Koiso was convicted in six counts and sentenced to life in prison. As a diplomat, Togo was posted to Manchuria, Switzerland, Germany, the United States and the Soviet Union. Opposed to a war with the Allied powers - on the grounds that Japan could not win - Togo was involved in last-minute attempts to broker discussions between the Japanese foreign minister and US President Franklin D Roosevelt.

Promoted to foreign minister shortly before the attack on Pearl Harbour, he signed Japan's declaration of war to ensure that the failure of diplomacy fell on his shoulders.

He resigned in Sept 1942 and spent most of the war in retirement. When it was clear that Japan could not win the war, he was returned to the cabinet and supported Tokyo accepting the Potsdam Declaration. Sentenced to 20 years, Togo died in prison. 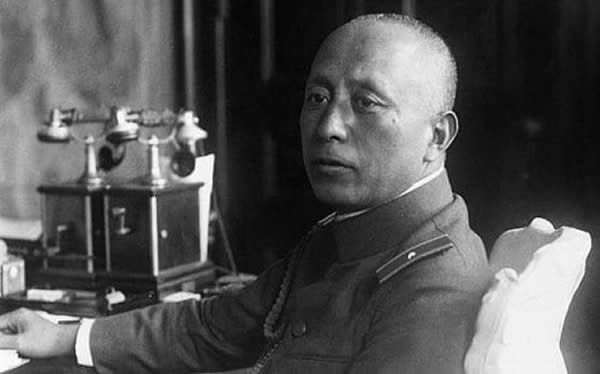 After rising through the ranks from an infantry lieutenant, Umezu served as a military observer in Europe during the First World War and joined the conservative Toseiha faction within the army in the 1920s.

He saw front-line service in China before being appointed vice minister for war in 1936. In July 1944, Umezu was named the last chief of the Imperial Japanese Army General Staff and joined the Supreme War Council.

Fiercely opposed to Japan's surrender, he had to be ordered by the Emperor Hirohito to sign the instrument of surrender.

Umezu was the senior representative of the army who boarded the US battleship Missouri in Tokyo Bay for the surrender ceremony. Found guilty of five counts, including waging a war of aggression, he was sentenced to life in prison. He died of cancer in 1949.