Just like the Berlin Olympics two years later, the 1934 World Cup in Italy was an event used for obvious political reasons. Italy's Prime Minister, Benito Mussolini, manipulated the tournament as a way to promote fascism, which was on the rise throughout Europe and would only gain a greater foothold when Adolf Hitler was made Chancellor of Germany in January 1933.

Mussolini's National Fascist Party was rooted in Italian nationalist ideology and claimed a modern Italy would be the heir to ancient Rome, while also seeking to establish the European nation as a worldwide power through the expansion of Italian territories.

At the time, Mussolini was still popular in Italy. It was only when Italy entered World War Two that his star seriously began to fall.

The World Cup started after Hitler and the National Socialist German Workers' Party, commonly known as the Nazi Party, began the Third Reich, while Mussolini had dropped any form of democracy in 1925 and was instead ruling as a dictator.

In the midst of some horrifically tense international relations and a mere five years away from WWII, Italy were hosting the 1934 World Cup and strong favourites to be crowned champions.

Under the guidance of coach Vittorio Pozzo, Giuseppe Meazza, widely considered Italy's greatest ever player, got his name on the scoresheet in the opening game as the USA were defeated 7-1, with Angelo Schiavo netting a hat-trick and Raimundo Orsi bagging a brace.

Unlike every other World Cup barring the 1938 edition, the matches were played in a straight knockout format. The Italians' victory over the USA set up a quarter-final against Spain and the fixture needed a replay, the first ever in World Cup history, in what were two extremely physical encounters. 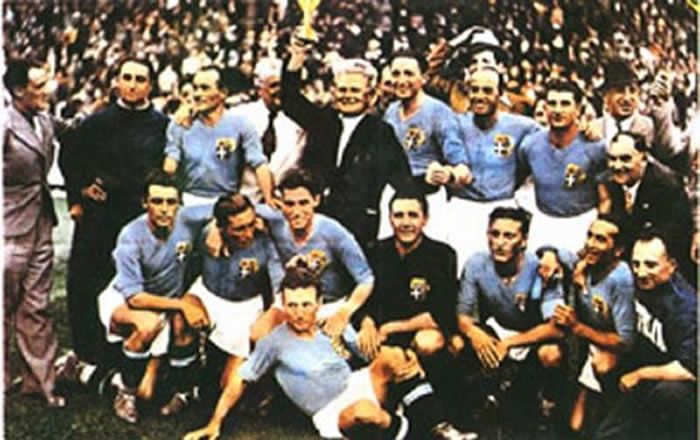 The first match was drawn 1-1 after extra time and the nature of the game resulted in Spanish goalkeeper Ricardo Zamora being ruled out of the replay, while Italian Mario Pizziolo suffered a broken leg and would play no further part in the tournament.

Italy won the second match 1-0, with Meazza scoring an 11th-minute winner, before another slender victory by one goal - this time over Austria - booked the Azzurri's place in the final. With both Italy and Germany doing well in the knockout stages, the final was in danger of becoming an all-fascist affair. Otto Nerz's Die Mannschaft impressed, thrashing Belgium 5-2 and besting Sweden 2-1, booking a semi-final berth with Czechoslovakia.

Germany eventually came unstuck against the aforementioned Czechoslovakia, who set up a final with Italy. The tournament's last game at Stadio Nazionale PNF was hugely important for 'll Duce' Mussolini, who saw football as a way to communicate with the common Italian.

Calcio was huge in Italy at the time and Mussolini's propaganda machine was intent on heightening public expectation of the final. A win, so Mussolini hoped, would send nationalism in Italy through the roof, benefitting him and his policies hugely.

Duly, Italy triumphed over Czechoslovakia 2-1 after extra time on 10 June, with Schiavio grabbing the winner after Orsi and Antonin Puc both scored late in the second half.

The Jules Rimet trophy was presented to the Italians, as was a specially commissioned cup from Mussolini, while Giovinezza, the official hymn of the Italian National Fascist Party, was played throughout the stadium.

Mussolini and Hitler met for the first time later that month in a summit that was largely unproductive, but the pair were both hugely responsible for the horrific events that would unfold over the next 11 years.