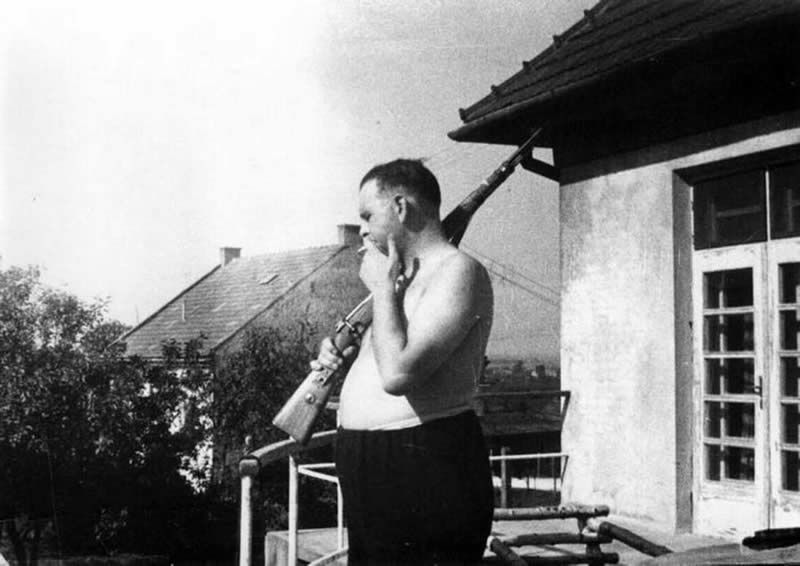 Amon Leopold Goeth was camp commander of the Plaszow concentration camp from February 1943 until September 1944. In the photograph he can be seen standing on his balcony preparing to shoot prisoners.

Amon Leopold Goeth (German: Amon Göth) the villain of the movie Schindler’s List, was born in 1908 in Vienna, Austria. At the age of 24, he joined the Nazi party. In 1940, Amon Goeth became a member of the Waffen-SS. He was assigned to the SS headquarters for Operation Reinhard in Lublin in German-occupied Poland in 1942. Operation Reinhard was the plan to evacuate the Jews from the Ghettos in Poland to three death camps: Treblinka, Sobibor and Belzec, all of which were in eastern Poland.

In February 1943, Goeth received a promotion and became the third SS officer to hold the job of Commandant of the Plaszow labor camp. While he was the Commandant of Plaszow, Goeth was assigned to supervise the liquidation of the Podgorze ghetto on March 13, 1943, and later the labor camp at Szebnie. The liquidation of the Podgorze ghetto in Krakow is shown in the movie, Schindler’s List.

On 3 September 1943, in addition to his duties at Plaszow, Goeth was the officer in charge of the liquidation of the another ghetto at Tarnów, which had been home to 25,000 Jews (about 45 per cent of the city’s population) at the start of World War II. By the time the ghetto was liquidated, 8,000 Jews remained. They were loaded on a train to Auschwitz concentration camp, but less than half survived the journey. Most of the survivors were deemed unsuitable for forced labour and were murdered immediately on their arrival at Auschwitz. According to testimony of several witnesses as recorded in his 1946 indictment for war crimes, Goeth personally shot between 30 and 90 women and children during the liquidation of the ghetto. 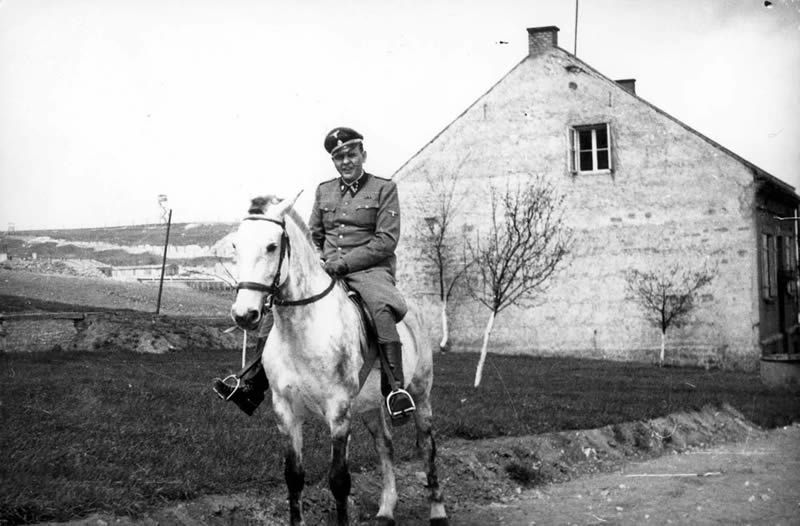 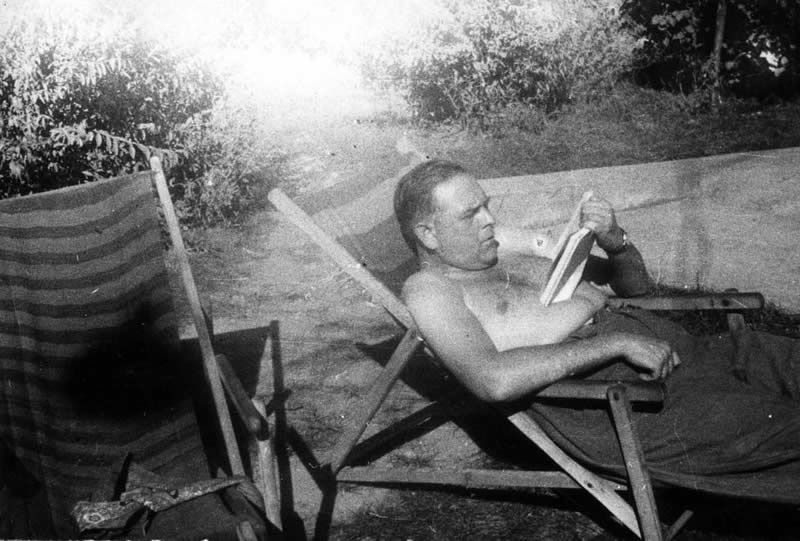 In early 1944 the status of the Kraków-Płaszów Labour Camp changed to a permanent concentration camp under the direct authority of the SS-Wirtschafts-Verwaltungshauptamt. It was during the earlier period that Goeth committed most of the random and brutal killings for which he became notorious. Concentration camps were more closely monitored by the SS than labor camps, so conditions improved slightly when the designation was changed.

The camp housed about 2,000 inmates when it opened. At its peak of operations in 1944, a staff of 636 guards oversaw 25,000 permanent inmates, and an additional 150,000 people passed through the camp in its role as a transit camp. Goeth personally murdered prisoners on a daily basis. His two dogs, Rolf and Ralf, were trained to tear inmates to death. He shot people from the window of his office if they appeared to be moving too slowly or resting in the yard. He shot to death a Jewish cook because the soup was too hot. He brutally mistreated his two maids, Helen Jonas-Rosenzweig and Helen Hirsch, who were in constant fear for their lives, as were all the inmates. Commandant Amon Goeth’s dog (Rolf) together with another dog. Arthur Kuhnreich, a Holocaust survivor: “I saw Goeth set his dog on a Jewish prisoner. The dog tore the victim apart. When he did not move anymore, Goeth shot him”. 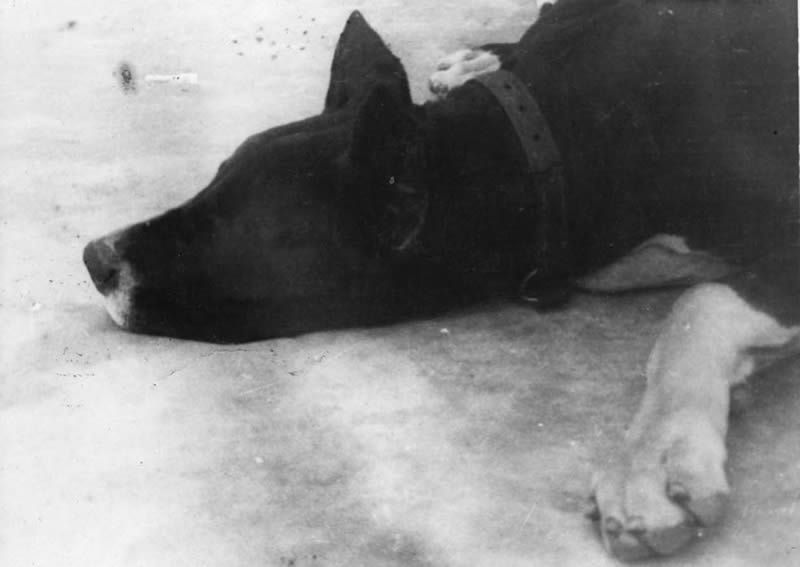 One of Goeth’s dogs. His two dogs, Rolf and Ralf, were trained to tear inmates to death.

This is how prisoner Joseph Bau (Prisoner Number 69084) described Goeth:

“A hideous and terrible monster who reached the height of more than two meters. He set the fear of death in people, terrified masses and accounted for much chattering of teeth. He ran the camp through extremes of cruelty that are beyond the comprehension of a compassionate mind – employing tortures which dispatched his victims to hell.

For even the slightest infraction of the rules he would rain blow after blow upon the face of the helpless offender, and would observe with satisfaction born of sadism, how the cheek of his victim would swell and turn blue, how the teeth would fall out and the eyes would fill with tears. Anyone who was being whipped by him was forced to count in a loud voice, each stroke of the whip and if he made a mistake was forced to start counting over again. During interrogations, which were conducted in his office, he would set his dog on the accused, who was strung by his legs from a specially placed hook in the ceiling.

In the event of an escape from the camp, he would order the entire group from which the escapee had come, to form a row, would give the order to count ten and would, personally kill every tenth person. At one morning parade, in the presence of all the prisoners he shot a Jew, because, as he complained, the man was too tall. Then as the man lay dying he urinated on him. Once he caught a boy who was sick with diarrhoea and was unable to restrain himself. Goeth forced him to eat all the excrement and then shot him”.

Helen Jonas-Rosenzweig, his maid: “As a survivor I can tell you that we are all traumatized people. Never would I, never, believe that any human being would be capable of such horror, of such atrocities. When we saw him from a distance, everybody was hiding, in latrines, wherever they could hide. I can’t tell you how people feared him”. 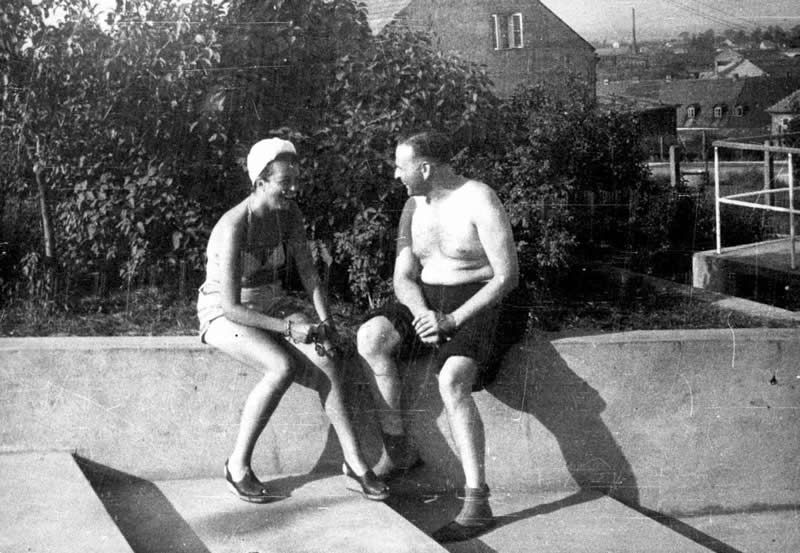 Camp Commandant Amon Goeth with his mistress, Majola (Ruth Irene Kalder). Kalder first met Göth in 1942 or early 1943 when she worked as a secretary at Oskar Schindler’s enamelware factory in Kraków. She soon moved in with Göth and the two had an affair. She took Göth’s name shortly after his death. 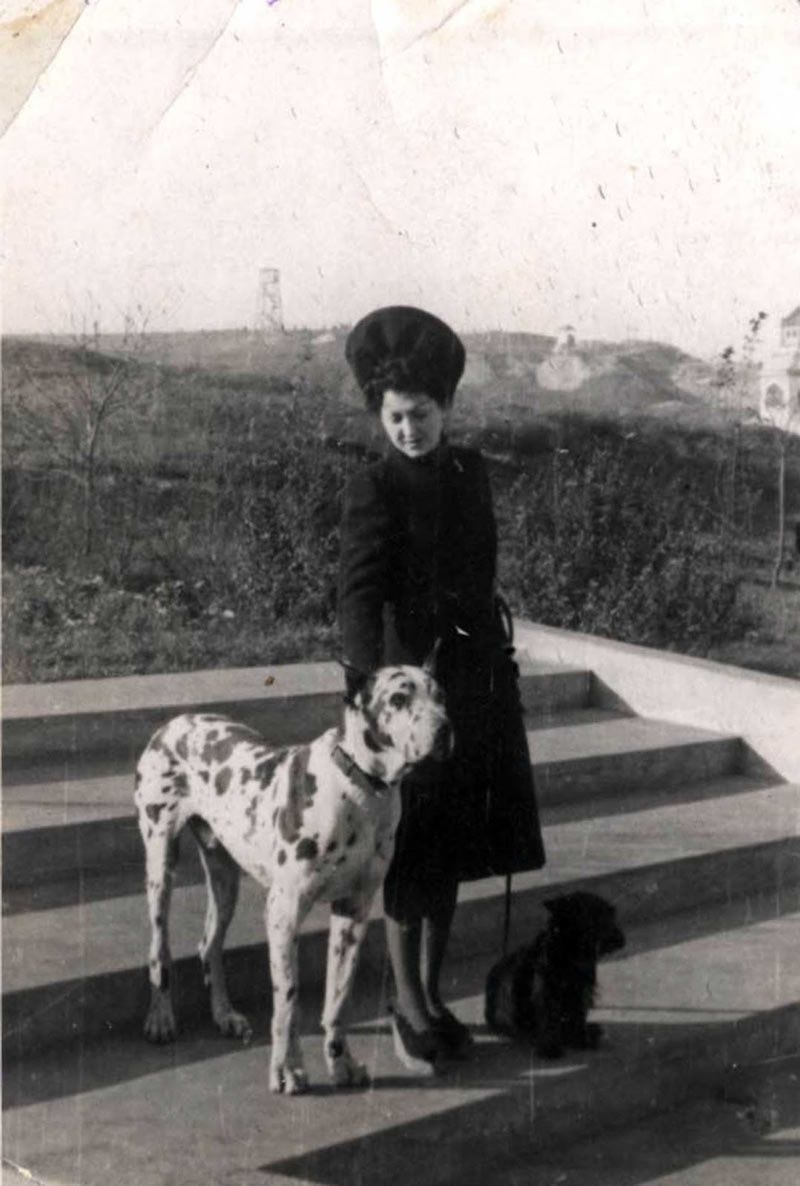 Ruth Irene Kalder “Majola”, the girlfriend of Goeth with his dog, Rolf. 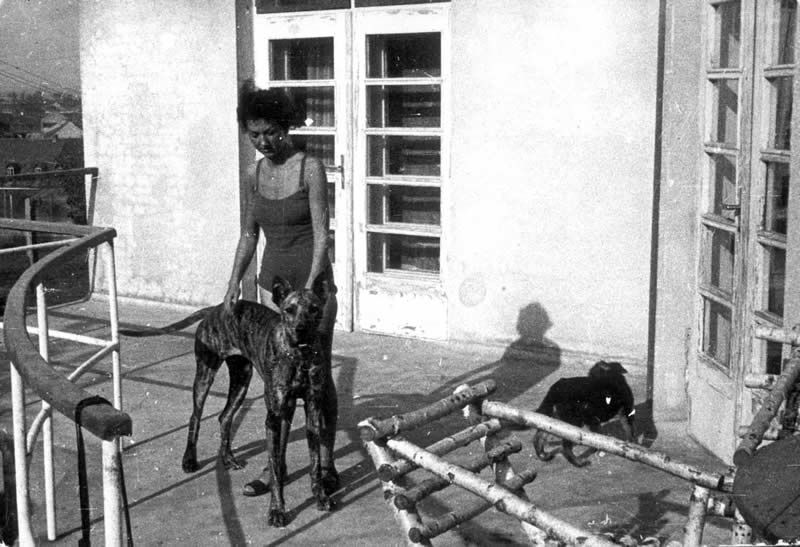 Goeth’s mistress, Majola, with his dog. 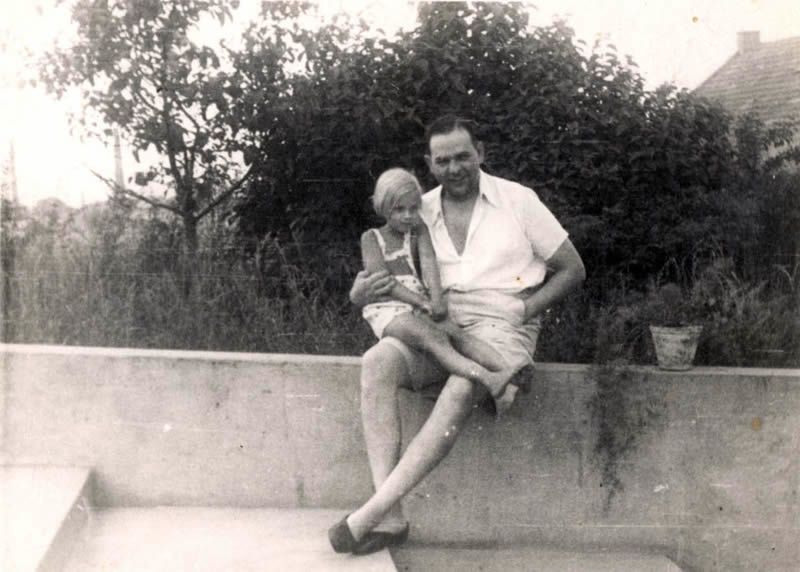 On 13 September 1944 Goeth was relieved of his position and charged by the SS with theft of Jewish property (which belonged to the state, according to Nazi legislation), failure to provide adequate food to the prisoners under his charge, violation of concentration camp regulations regarding the treatment and punishment of prisoners, and allowing unauthorized access to camp personnel records by prisoners and non-commissioned officers.

After the war, Goeth was extradited to Poland, where he was tried by the Supreme National Tribunal of Poland in Kraków between 27 August and 5 September 1946. Goeth was found guilty of membership in the Nazi Party (which had been declared a criminal organisation) and personally ordering the imprisonment, torture, and extermination of individuals and groups of people. He was also convicted of homicide, the first such conviction at a war crimes trial, for “personally killing, maiming and torturing a substantial, albeit unidentified number of people”.

During his trial Goeth displayed provocative indifference. He accepted responsibility for what happened at Plaszow. He had been given authority and permission to do everything he had done, he said, and was only carrying out orders and instructions received from his superiors. He also contended that the penalties he was inflicting upon the inmates including putting them to death, were within his disciplinary jurisdiction as commandant of the camp, and were in accordance with the German regulations in force. Goth was sentenced to death and was hanged on 13 September 1946 at the Montelupich Prison in Kraków, not far from the site of the Plaszów camp. Goeth’s last words were “Heil Hitler”. His remains were cremated and the ashes scattered in the Vistula River. 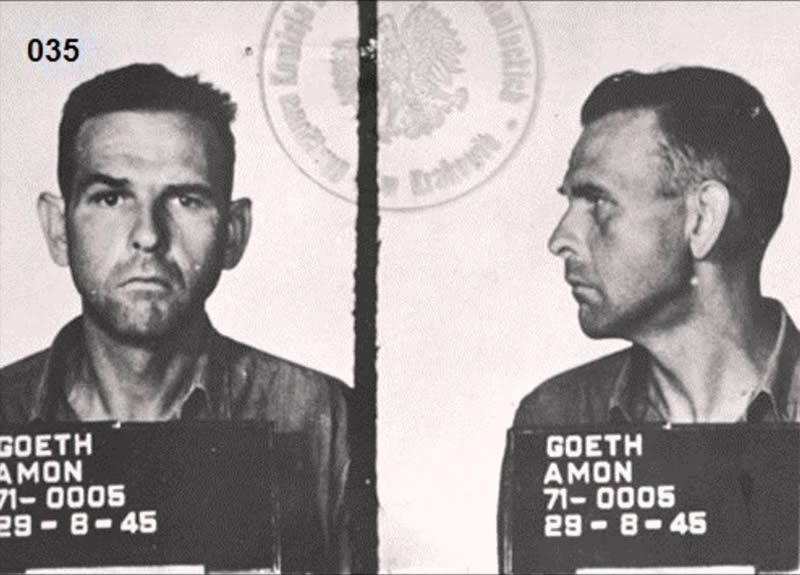 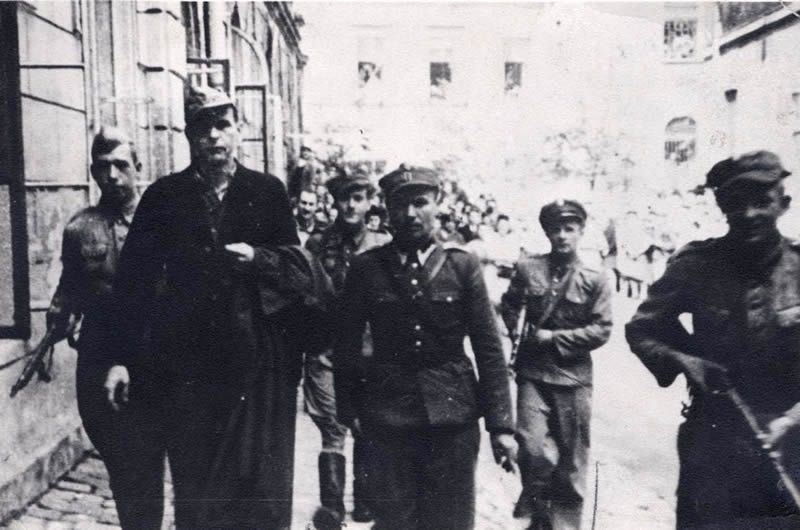 Amon Goeth leaves courthouse after being sentenced to death. Amon Göth in 1946, shortly before his execution.