Forensic scientists have identified the remains of a woman found buried at the estate of Hitler's deputy Hermann Goering 21 years ago as those of his wife Carin.

Carin, born Carin Fock in Sweden, died aged 42 in 1931 and was buried in her homeland.

But as Goering rose through the Nazi ranks he had her body exhumed and transported to his massive hunting lodge outside of Berlin called Carinhall in her memory. Nazi love: The body of Carin Goering (left), the first wife of high-ranking Nazi Hermann Goering has been discovered on the site of his former hunting lodge near Berlin 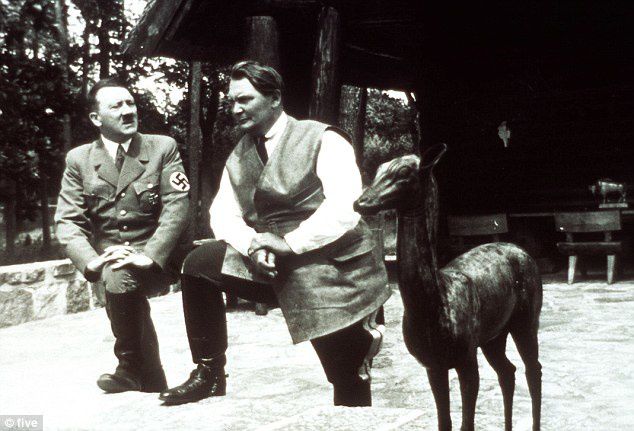 Nazi leaders: Adolf Hitler visits Hermann Goering at his Carinhall hunting lodge where the body of his first wife Carin, which Goering had exhumed from her native Sweden, has recently been discovered

As the Red Army advanced on the estate early in 1945 Goering ordered his vast art collection to be transported to safety and the place dynamited.

Ever since then it has a been a magnet for weekend treasure hunters who pore over the ruins convinced they will find missing masterpieces in the rubble and undergrowth.

In 1991 they did find a chest with human remains which was sent to Sweden's National Board of Forensic Medicine for identification.

An expert called Marie Allen and her colleagues, together with Anna Kjellström at the Stockholm University osteoarchaeological research laboratory, have now used state of the art methods to determine whose they were. Hermann and Carin Goering pictured in the early 1920s (Ieft), and the shrine he built in her memory (right)

Analyses of the total of 26 bones showed that they were from an adult woman while DNA analyses confirmed that they are from a woman.

The researchers then performed two kinds of genetic analyses.

'The variant of mitochondrial DNA we saw in the bones is a relatively common one, occurring in about 10 per cent of all Europeans.

They were able to show mother-son kinship. Reduced to rubble: Goering had his Carinhall hunting lodge destroyed as the Russian Red Army advanced into Germany

'The results of our anthropological and genetic analyses, together with historical data, provides several pieces of evidence in the identification of the remains of the former Nazi leader Hermann Goeing's wife, Carin Goering.,' she added.

After the testing the remains were reburied in Sweden with family members present.

Goering, who founded the Gestapo secret police, organised the bombing of defenceless cities in WW2 and was a prime architect of the Nazi Holocaust, was sentenced to death at the Nuremberg War Crimes Trials.