Cutlery made for Nazi leader Adolf Hitler to celebrate his 50th birthday has been sold at auction for £12,500. Auctioneers said the silverware was "a big part of modern history"

The formal pattern silverware was discovered during a house clearance in Dorset, having belonged to a senior military officer.

The two knives, three spoons and three forks, which were created for Hitler's use during formal occasions, had been expected to fetch up to £2,300.

Sherborne's Charterhouse Auctioneers said they were "a big part" of history.

It is not illegal to sell Nazi memorabilia in the UK, but such sales have led some to question whether it is tasteful.

MPs have previously urged a ban on selling these types of goods, and more recently Facebook was urged to block Nazi relic sales. 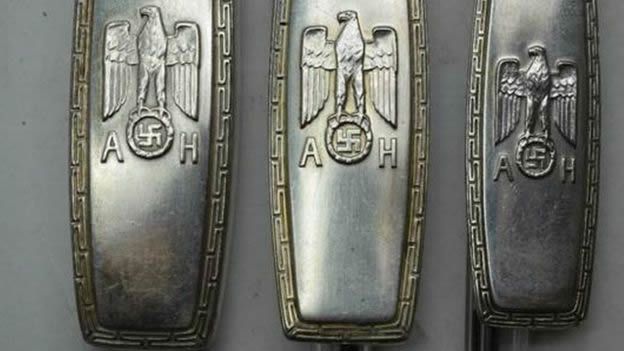 The cutlery was produced for Hitler's 50th birthday

Richard Bromell, of Charterhouse Auctioneers, said: "About 3,000 pieces were produced for Hitler's 50th birthday. This is the first set I have seen in 33 years.

The cutlery bears the Nazi eagle, swastika and Hitler's initials.

"It's a niche market - some people will have interest, others will not - but it's a big part of modern history," he added.

The items were bought by one online buyer but the auction house would not give further details. 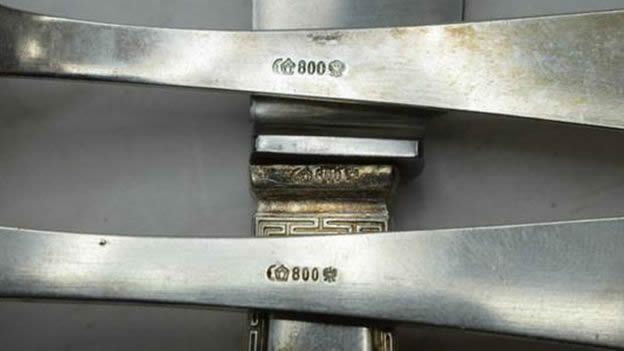 It would have been used during formal occasions

He initiated the Second World War in Europe, with the invasion of Poland in September 1939, and was central to the Holocaust.

The Nazi regime ended after Allied forces defeated Germany in May 1945, ending the war in Europe.

Hitler took his own life, aged 56, in his bunker in Berlin on 30 April 1945 to evade capture by the Soviets.