Fenella Fielding as Valeria, a vampire, and Kenneth Williams in Carry on Screaming, 1966. Photograph: Rex/Shutterstock

Inimitable, luxuriantly breathy and slyly mellifluous, Fenella Fielding, who has died aged 90, was a household name in the 1960s when she graced and sidled across the West End stage and the television screen, as well as appearing in the Carry On and Doctor films, usually playing a vamp, or the femme fatale, alongside actors such as Kenneth Williams, Sid James, Dirk Bogarde and James Robertson Justice.

There was always something exotic and possibly louche about Fielding. You never felt that she had skimped on mascara, eyeshadow or lipstick, or that her hair was necessarily all her own in its chaotic and often strangely unkempt manifestation. At the same time, she might appear in public, and occasionally on television, on a chat show, or the popular word game Call My Bluff, dressed in clothes of a distinctly severe line, with white collars back and front, clasped with big jewellery, which gave her the appearance of an unlikely modern nun on the run. No one ever had such a laughing drawl, or haughtier, naughtier intonations.

And then she would be spied scuttling around the stacks in the London Library, researching and reading, writing up her diary; as an intellectual, she was no slouch. She was as clever as she was funny, the emphatic articulation a sign of both the musical value she attached to words and the precise weight and emphasis of their meaning. A lot of gurgling and swooping went on, but years at the coal face of cabaret and intimate revue ensured that Fielding’s timing was never out, her meaning never insecure, her indecision always final.

Her defining performance was that of Lady Parvula de Panzoust, an outrageous, high-fashion maneater, in Sandy Wilson’s Valmouth (1958), a brilliant musical version of Ronald Firbank’s orchidaceous 1919 novelette. When the piece was revived by the director John Dexter at the Chichester festival theatre in 1982, Fielding returned to the role, as did her fellow original cast members, Bertice Reading and Doris Hare, to theirs. By then, Fielding’s stage career was virtually over. Her utterly distinctive performance persona was both her chief calling card and her greatest handicap. The world of entertainment treasured a talent it found increasingly hard to accommodate.

Later in her career, certainly as Madame Arcati, the eccentric medium, in Noël Coward’s Blithe Spirit at the Salisbury Playhouse in 1999, her magnificent weirdness was scuppered by a weakened technical assurance; nor could you imagine such a creature pedalling herself home for seven miles on a bicycle. Fielding’s Arcati would only have contemplated a sedan chair fitted out with an abundance of cushions and custards, borne by two well-built local lads with a penchant for show tunes.

Fenella grew up in a mansion flat in Clapton, east London, with her parents, Philip and Tilly Feldman (both Jewish, he an immigrant Lithuanian, she originally Romanian), an elder brother, Basil (later Lord Feldman, a Tory peer), and a “sort of nanny person” who took Fenella to dance classes on the Holloway Road. Philip was a cinema manager and boss of a ladies underwear factory, a prominent freemason and, according to his daughter, abusively violent towards her.

The family moved to Edgware in 1940 when Fenella was 13 and a pupil at the North London collegiate school. She won a scholarship to Rada, but left after one year, pressured by her parents to “get a proper job”. She took a secretarial course while studying at Saint Martin’s School of Art (now Central Saint Martins) and worked for the actors’ agent Al Parker, and in a beautician’s parlour. Fenella Fielding, second from right, with her co-stars, Jan Waters and Cicely Courtneidge, in High Spirits, a musical comedy based on Noël Coward’s play Blithe Spirit, at the piano with the author, 1964. Photograph: Moore/Getty Images

But she was determined to go on the stage. After a grounding in concert halls and club theatres around London, she left home, took a flat in Clarges Street, Mayfair, which she shared with a prostitute, and started making cameo appearances on the night club scene of the 1950s: at Churchill’s in Bond Street, the Don Juan in Brook Street and in the Washington Mayfair hotel.

She was talent-spotted while appearing at the London School of Economics in a revue written by Ron Moody, and this led to her first West End professional engagement, in a 1954 revue, Cockles and Champagne, at the Saville. So she was a comparatively late starter, but she made up for lost time as an exotic vamp, Luba Tradjejka, in Jubilee Girl (1956) at the Victoria Palace.

She was acquiring a following, and the producer Michael Codron cast her first in Valmouth and then in a revue, Pieces of Eight (1959), at the Apollo co-starring Williams – with whom she soon fell out, noting that he wanted her to be good, but not too good – which featured sketches written by Peter Cook and Harold Pinter.

Her earliest films included Doctor in Distress (1963), with Bogarde at his smoothest and sprightliest as Simon Sparrow, and Ken Hughes’s Drop Dead Darling (1966) in which, as a wealthy object of Tony Curtis’s attentions, she was treated to a ride out in the country, where she jumped over a hedge Curtis had artfully placed on the edge of a cliff. Fielding played Valeria the vampire in Carry on Screaming (1966), a very funny spoof of the Hammer horror films, in which she curled up on a sofa and exhaled the line, “Do you mind if I smoke?” after which vapour billowed out from beneath her body; the phrase served as the title of her chatty 2017 autobiography, written with Simon McKay.

She could be perfect in Feydeau farces, and was just that in Sardou’s Let’s Get a Divorce at the Mermaid in 1966 and as the aptly named Lady Eager in another Mermaid classic, Lock Up Your Daughters (1969), an updated musical version by Keith Waterhouse and Willis Hall, with music by Laurie Johnson, of both Henry Fielding’s Rape Upon Rape and Vanbrugh’s The Relapse, with Christopher Plummer as Lord Foppington leading a cast including Georgia Brown, Glynis Johns and Roy Kinnear.

The Chichester festival theatre was another regular haunt; she was Mrs Sullen in The Beaux’ Stratagem there in 1967, and an imperious duchess in Look After Lulu, adapted by Coward from Feydeau, in 1978. Even Ibsen held no fear for her, and there were glowing reports of her Hedda Gabler in Leicester in 1969 and her Nora in A Doll’s House at the Gardner Centre in Brighton in 1970.

She moved in 1966 into a top-floor flat in Connaught Mews, near Marble Arch, which cost her just £13 a week. She had a knack for landing on her feet in her personal life that perhaps evaded her professionally later on. She did not marry, but said that for 20 years she kept two lovers on the go, one of them married, without either knowing of the other’s existence, as befits a Feydeau specialist.

In her memoir she described the men who had behaved badly in the workplace: Tony Hancock was “drunk”, Warren Mitchell simply “horrible” and Norman Wisdom (with whom she filmed Follow a Star in 1959) prone to on-set lechery: “His hand up your skirt first thing in the morning was not a lovely way to start a day’s filming,” she said. 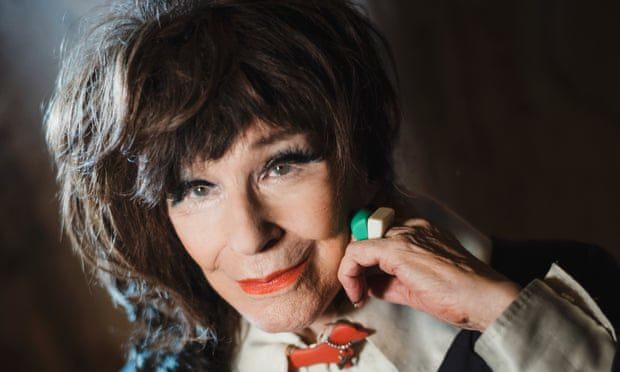 Fenella Fielding in 2017; she carried on working past her 90th birthday. Photograph: Sarah Lee for the Guardian

Critics loved her and hated most of the things she was in. When she played Kaa the rock snake in The Jungle Book at the Adelphi in 1984, she wrapped herself around a pole in a manner that reminded Michael Billington of Hermione Gingold in a Medea parody clinging to a phallic pillar with a cry of “This is my personal column!”, while another scribe said of her Lady Fidget in a vile production of The Country Wife at the Mermaid in 1990 that she “pouts like a tulip in a field of potatoes”.

Fielding continued working past her 90th birthday, making radio programmes, recording poetry and voiceovers and rarely going anywhere without her spider-like eyelashes, eyelashes Dusty Springfield once acknowledged as the model for her own. She was not immune to the appeal of drink, drugs and psychotherapy, but survived all these brushes to come out fighting, and as huskily cheerful and optimistic as ever. She was appointed OBE in the Queen’s birthday honours in June.

She is survived by her brother.