This is a story for our times: ancient Rome has returned, complete with President Caligula 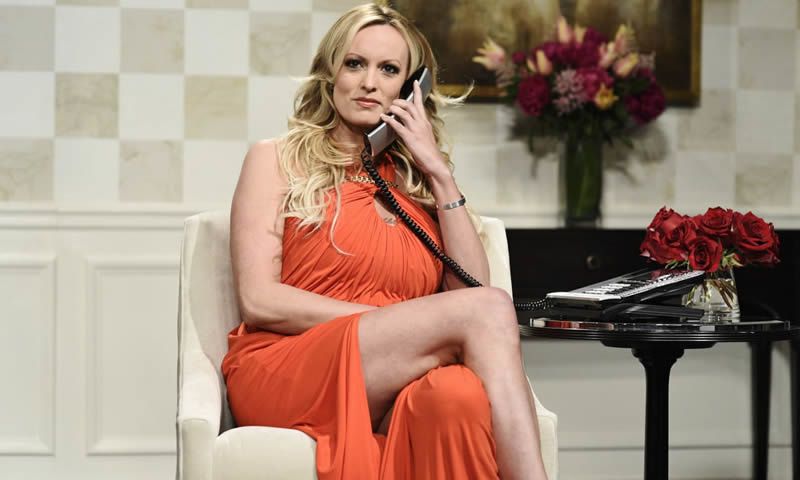 Stormy Daniels appears on Saturday Night Live in New York, in May 2018. Photograph: Will Heath/AP

Sex can be expensive. Just ask Donald Trump. He’ll tell you, just like he told Howard Stern back in the day.

Trump’s hush money deal with the adult film star Stormy Daniels cost him $130,000 and the bill may go higher. Only Robert Mueller and the Department of Justice know for sure. When Nintendo Life is trolling the president, the White House definitely has a problem.

Into this testosterone-fueled fire leaps Daniels, with her memoir Full Disclosure. Already, the book has attained a legacy of its own. At a minimum, Mario Kart will never be the same. The president is monikerless no more. Starting with “Mushroom Mario”, a universe of nicknames awaits. “Lyin Ted”, “Low Energy Jeb” and “Little Marco” are all wanting by comparison.

As she has on television, in print Daniels emerges as no less than Trump’s equal. Just think of Tamar and Judah and the Book of Genesis. There’s something biblical about a wayward woman holding her accuser’s staff and staring him straight in the eye, especially when folks are prepared to burn her at the stake on account of his misdeeds.

Daniels refuses to see herself as Hester Prynne or Wonder Woman. Rather, she demands to be accepted on her own terms

Wisely, Daniels refuses to see herself as Hester Prynne wearing an “A” on her chest or as Wonder Woman with a tiara on her head. Rather, she demands to be accepted on her own terms: as a standout performer and director in the adult entertainment industry, one proud of her craft.

She shares glimpses of her hardscrabble early years, writes of suffering sexual abuse and her entry into her line of work. Her personal life is admittedly tumultuous. Still, she announces: “I own my story and the choices I made.”

Full Disclosure spares few details in its portrait of Trump. Not surprisingly, he comes across as manipulative, insecure and vain. Surprisingly, the Trump Daniels met in 2006 was less eruptive than the present iteration. Apparently, the Oval Office can do that.

The author also depicts Trump in a state of totally asymmetric post-coital bliss, totally satisfied with himself. In less than two decades, then, he has traveled from a New York Post headline blaring “best sex ever” to “‘I had sex with that’ … Eech”.

The book catalogs Trump’s quirks, including his fascination with and antipathy toward sharks. Fittingly, Daniels recalls an instance in 2007 where Trump received a phone call from Hillary Clinton while she and Trump were watching Shark Week and Clinton was squaring off against Barack Obama. New York politics makes particularly strange bedfellows.

Daniels regrets signing statements in which she denied having an affair with Trump. In her view, it was all 'bullshit'

According to Daniels, Trump “had a whole conversation about the race, repeatedly mentioning ‘our plan’”. Back then, Bill Clinton was a member of Trump’s golf club in Westchester and had “casually” encouraged Trump to run.

Not surprisingly, Daniels regrets signing statements in which she denied having an affair with Trump. In her view, it was all “bullshit”. To alert the world that something was amiss, she writes that she altered her own signature on a statement before appearing on Jimmy Kimmel’s show earlier this year.

Faced with Cohen’s perpetual bluster, she shreds the lawyer and his ex-boss in a single paragraph. As Daniels frames things, Trumpworld acted as if Cohen was a “legal mastermind, a consigliere who fixed everything”. Daniels revels in Cohen’s reluctance to disclose that Hannity had sought legal advice from him, and the ensuing “Legally Blond moment” when the name of Trump’s unofficial chief of staff spilled out in open court. Daniels concludes that Cohen was simply a “moron”. To say the least, coming from Giuliani, a man who is the process of exiting his third marriage and once got hitched to his cousin, the critique rings hollow. In fact, an internal vulnerability study prepared for His Honor’s 1993 mayoral campaign observed that his “personal life raises questions about a ‘weirdness factor’”. Ending the discussion, Daniels flips Rudy the verbal bird.

Make no mistake, Full Disclosure is a story for our times. Ancient Rome has returned, complete with bread and circuses and a president impersonating Caligula.

As the book’s formal publication nears, the supreme court confirmation of Brett Kavanaugh stands before the nation and the Senate. Again, the US is being treated to a battle of the sexes, and not in a good way. Bobby Riggs and Billie Jean King this is not.

Kavanaugh is finding out that allegations of attempted rape can put a crimp in one’s ambitions, and that what happens at Georgetown Prep or the DC suburbs doesn’t always stay there.

Just as Trump vouched for Rob Porter, his allegedly wife-beating ex-White House staff secretary, the president is weighing in for Kavanaugh and, for added measure, directly attacking the credibility of Christine Blasey Ford, Kavanaugh’s purported victim. This is not exactly the narrative Republicans need, hurtling toward the midterms. When Senate seats in Tennessee, Texas, and Arizona are in play, the party has a huge problem.

The latest polls depict an unloved Kavanaugh. Reuters-Ipsos shows the public opposing his confirmation 36-31 while Wall Street Journal/NBC News pegs the gap at 38-34, a historic approval deficit for a would-be supreme court justice. Even Harriet Miers, George W Bush’s failed pick for the high court, saw her numbers above water.

The outcome of this standoff remains to be seen. For the moment, Daniels is one person with an unvarnished narrative.