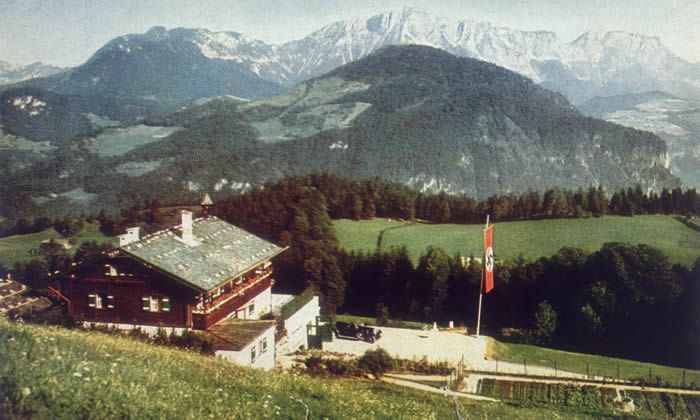 Just two signs – one in German, the other in English – mark the mountainside location of the Berghof, Adolf Hitler’s retreat in the Bavarian Alps which acted as the Third Reich’s second seat of command.

The site on Obersalzberg has lain largely abandoned since the already bomb-damaged chalet was finally blown up and buried in 1952, with fast-growing trees planted to hide from view even the soil on which Hitler once trod.

In 1999, a small museum, the Dokumentation Obersalzberg, which chronicles the evil committed by the Nazi regime, was opened 300 metres from the Berghof site in an attempt to stop the area becoming a shrine. But the far right have kept coming. The information signs are defaced. Swastikas are carved into the trees. Lit candles are left on a perimeter wall and a fireplace that make up the few remaining ruins.

Museum staff have noticed that in the last two years coach tours from Hungary and Czech Republic, where far-right ideas are on the rise, have started to arrive.

It is in this context that a €21m expansion of the Dokumentation Obersalzberg, due to be completed in the summer of 2020, is once again focusing minds: what to do about the Berghof?

As it stands, a small stony path through the trees is all that links the museum to the patch of unkempt ground where the Berghof stood above the town of Berchtesgaden. Dr Mathias Irlinger, who has worked at the museum since 2004, believes the time of turning a blind eye to the place where Hitler decided to invade Poland and fomented the Holocaust should come to an end. “If you do nothing to an area, they can do what they want,” Irlinger said. “If you just say, ‘Here lived Hitler’, that is a problem.

“Some people want to leave it as it is, others think an audio tour or more … The more people who are around there, the less likely they will get out their flags. The far right like to go to places which are hidden away.”

The museum, managed by Munich’s Institute of Contemporary History, is currently a two-floor exhibit built on a former guest house, from where there is an entrance to four miles of tunnels and bunkers constructed in 1943 to protect Hitler and his entourage from allied bombs. With the completion of the museum’s expansion, which has involved carving into the mountain, the exhibition space will be doubled to 840 sq metres.

The building works have been slightly delayed – for understandable reasons. On 25 April 1945, British and American forces, believing that Hitler had fled Berlin for the Berghof, bombed it from the air.

As the construction workers dug into the hill last year, they found one of the undetonated bombs. “So we know there might be more,” Irlinger said. “Actually, when it was found we had to evacuate the building, but we ran down and said we had to keep it for the exhibition. It will be put in front of the entrance to the bunkers.”

Irlinger said that the expanded museum’s aim is to connect the pictures of Hitler taking tea, playing with his dog, and going to the opera in Salzburg, with the decisions he made in between the photoshoots to kill millions. Adolf Hitler at the Berghof, around 1936. Photograph: Imagno/Getty Images

The story of Dora Reiner, a local woman who was designated as Jewish by the Nazis and transported to Munich and on to Kaunas will be told. Transportation papers showing she was killed in a mass shooting shortly after arriving in Lithuania will be exhibited. “And then we have a local paper report here saying that all her goods are sold now,” said Irlinger. “There is that close connection between this idyll and the mass crimes. It is still a problem for me to reconcile.”

About 170,000 visitors came last year, with some complaining of being unable to see the exhibits due to the cramped conditions.

Irlinger said it was staff members’ duty to offer information and education to those who wanted to visit, while being aware of those with darker motives. “It is getting harder for us because with skinheads we can see them,” he said. “What we have now is that people are more smart. They say things that are on the edge. They are hiding more. They know how to provoke and ask questions, or bring arguments, that it takes a long time to argue against.”

Irlinger said some people say they have heard enough about the Third Reich. But for him, he said, the Germans have only just started talking.

“You have this first moment at the end of the war where a lot of people have an interest to forget. You don’t ask what your neighbour has done if you have been involved too. Then there was the second generation with student protests in 1968 and people started to ask questions.

“But place likes the Obersalzberg, where nice pictures were made of Hitler, were ignored. This third generation goes to these places,” said Irlinger, 34. “We can look at Nazi propaganda now. We are strong enough to look at these pictures … We have an obligation to remember and take warning.”