Stansfield Turner, who led the Central Intelligence Agency through four tumultuous years under President Jimmy Carter, starting small covert actions against international communism that grew into some of the biggest battles of the Cold War, died on Thursday at his home in Redmond, Wash. He was 94. Mr. Turner with aides in 1977. He later wrote that the C.I.A. he inherited was demoralized and disorganized after having been dragged into the Watergate scandal during the Nixon administration.Credit...George Tames/The New York Times

Mr. Turner was an admiral commanding the southern flank of NATO when Mr. Carter, a new president promising a fresh start in both foreign and domestic policies after the scandals of the Nixon administration, called on him to take the helm of American intelligence.

On the campaign trail, Mr. Carter had called the C.I.A. a national disgrace. Mr. Turner, leaving his base in Italy, took over on March 9, 1977, succeeding George Bush, who had tried to steer the C.I.A. for a year while congressional committees combed through the agency’s history after the Watergate scandal.

The C.I.A. had been dragged into that political swamp after President Richard M. Nixon admitted that he had used the C.I.A. to try to obstruct a federal investigation of the political burglary at the Democratic National Committee headquarters in the Watergate complex in Washington, the episode that set off the crisis.

Mr. Turner later wrote that the C.I.A. he inherited was demoralized and disorganized. But he also acknowledged that commanding and controlling it had been a struggle. He had believed that it was possible to run a secret intelligence service in an open society. He found out how hard a task that was, he said. President Jimmy Carter with Admiral Turner in the Oval Office in 1977 on his being named director of central intelligence, succeeding George Bush.Credit...Official White House photograph

Mr. Turner did not see eye to eye with the C.I.A.’s clandestine service, the officers who conduct espionage and covert action overseas. The disagreements grew only more intense when he dismissed 825 officers from the spy service, starting with the bottom 5 percent on the performance charts.

President Carter supported that action. “We were aware that some of the unqualified and incompetent personnel whom he discharged were deeply resentful, but I fully approved,” Mr. Carter said in 2007 in a written response to a question about the episode.

But resentment against Mr. Turner smoldered at the C.I.A. He wrote that his enemies within the agency had tried to discredit him with disinformation campaigns — “one of their basic skills,” he wrote.

A Christian Scientist who drank hot water with a lemon slice at breakfast, Mr. Turner was an upright Navy officer who shared his president’s sense of propriety.

But like Mr. Carter, he said, he had no illusions about the nation’s need for secret intelligence. “Lots of people think President Carter called me in and said, ‘Clean the place up and straighten it out.’ He never did that,” Mr. Turner said in an interview after his retirement. “From the very beginning he was intensely interested in having good intelligence. He wanted to understand the mechanisms — from our satellites to our spies to our methods of analyzing what was happening. He was extremely supportive of the intelligence operations.”

He added: “The Carter administration had no bias against covert action. The C.I.A. had a problem with covert action itself, because it was in this state of shock from the criticisms it had gone through” during the 1970s. Early on, Mr. Turner said, he faced a life-or-death question. C.I.A. officers had come to him and told him that they had an agent “almost inside” a terrorist organization. The officers, he said, wanted to ask the agent “to do one more thing to prove his bona fides” — “to go out and murder one of the members of the government.”

Still, under Mr. Turner, the C.I.A. mounted covert actions aimed at Moscow, Warsaw and Prague, printing and distributing magazines and journals in Poland and Czechoslovakia, circulating the written work of dissidents in the Soviet Union, placing fax machines and tape cassettes in the hands of people behind the Iron Curtain. These acts, approved by Mr. Carter and his national security adviser, Zbigniew Brzezinski, sought to subvert the control of information that was the foundation of repression in the Communist world.

None of this enhanced the C.I.A.’s understanding of the Soviet Union, Mr. Turner acknowledged. “We were appreciating as early as ’78 that the Soviet economy was in serious trouble,” he said after the Cold War was over, but “we didn’t make the leap that we should have made — I should have made — that the economic trouble would lead to political trouble. We thought they would tighten their belt under a Stalin-like regime and continue marching on.”

The C.I.A. did not see the Soviet invasion of Afghanistan coming in December 1979. But days later, Mr. Carter ordered the agency to begin shipping weapons to the Afghan resistance. During the 1980s, under President Ronald Reagan, the United States poured billions of dollars into that C.I.A.-run effort. The Reagan administration also greatly expanded small covert operations that had begun under Mr. Carter to undermine the left-wing Sandinista regime in Nicaragua.

Nor did the C.I.A. anticipate the fall of the shah of Iran. “We were just plain asleep,” Mr. Turner said. Mr. Turner testifying before the Senate Committee on Government Affairs in Washington in 2004.Credit...Larry Downing/Reuters

The Iranian revolution caused the greatest frustration of Mr. Turner’s years at the agency: The four members of the C.I.A. station in Tehran were among the American hostages held for 444 days, until the end of the Carter administration, in January 1981. On taking office, President Reagan dismissed Mr. Turner.

Mr. Turner spent much of his remaining years writing and lecturing on the C.I.A. and American national security. Reviewing his 1985 memoir, “Secrecy and Democracy: The CIA in Transition,” for The New York Times, the historian Thomas Powers wrote that Mr. Turner “had no instinct for the black arts” of covert action and clandestine political warfare at the C.I.A.

“When it comes to the darker side of intelligence,” Mr. Powers wrote, “his book takes on the cheerful vagueness of a 19th-century marriage manual dealing with Problems of the First Night.”

Mr. Turner’s 2005 book, “Burn Before Reading: Presidents, CIA Directors and Secret Intelligence,” was far less restrained. Calling the C.I.A.’s reputation “at a nadir,” he proposed dismantling the agency as the best course for the nation and “the professionals in the C.I.A. as well.” After the Sept. 11 attacks, he criticized George W. Bush’s administration for using the C.I.A. to conduct harsh interrogations of suspected terrorists.

“I am embarrassed that the U.S.A. has a vice president for torture,” he said, referring to Vice President Dick Cheney. “I think it is just reprehensible.”

Writing also made Mr. Turner an advocate for the First Amendment. After submitting his first book to the C.I.A. for a prepublication review — a system he had created — the agency insisted on more than 100 deletions in the name of national security. He called the deletions “a gross abuse of the constitutional right of free speech.” 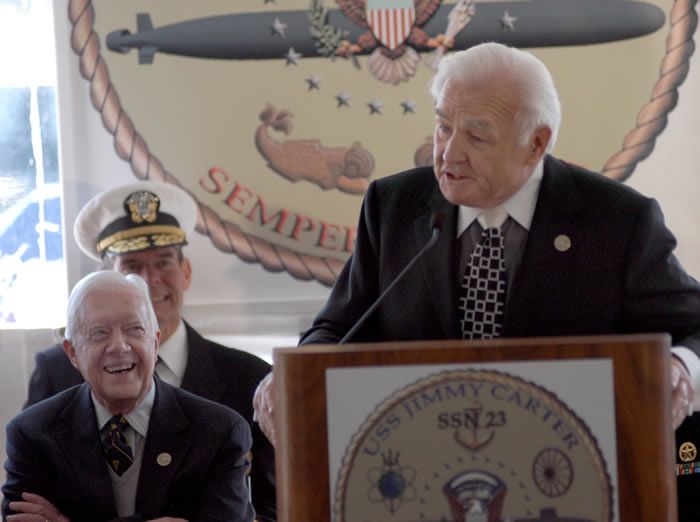 Mr. Turner spoke in 2005 at a submarine commissioning ceremony in Groton, Conn., that was also attended by Mr. Carter.Credit...Jack Sauer/Associated Press

Mr. Turner was born on Dec. 1, 1923, in the Chicago suburb of Highland Park, Ill., to Oliver Stansfield Turner, a real estate broker, and the former Wilhelmina Josephine Wagner. He attended Highland Park High School and entered Amherst College in 1941.

Mr. Turner joined the Naval Reserve before being admitted to the United States Naval Academy in 1943; one of his classmates was Jimmy Carter, though the two men barely knew each other at the time. At Annapolis, Mr. Turner played guard on the football team.

A Rhodes scholar, Mr. Turner received a degree in politics, philosophy and economics from Oxford University in 1950. As he rose though the ranks during the Korean and Vietnam Wars, he commanded a minesweeper, a destroyer, a carrier group and a fleet. He also served as president of the Naval War College in Newport, R.I., from 1972 to 1974.

His marriage to Patricia Busby Whitney ended in divorce; they had a son, Geoffrey, and a daughter, Laurel, both of whom survive him. His second wife, Karin Gilbert, who had been his secretary, died in January 2000 in a crash of a light plane in Costa Rica. Mr. Turner was critically injured in the accident but recovered and returned to his post, which he had held since 1991, at the Graduate School of Public Policy at the University of Maryland.

He is also survived by his wife, Marion Weiss Turner, whom he married in 2002, along with his stepsons Peter and Andrew Weiss; another stepson, John Gilbert, and a stepdaughter, Laila Ballon, from his marriage to Ms. Gilbert; 12 grandchildren and four great-grandchildren.

Mr. Turner’s colleagues in the Navy were given to describe him as contemplative and intellectually curious — whether the subject was military affairs, philosophy or opera.

But they also described him as energetic and often tough. When he commanded the Second Fleet in the Atlantic in 1974, he was known to make surprise visits to his ships by helicopter, The Times reported in 1977. Before landing he would sometimes engage in an impromptu emergency drill, tossing a life preserver into the cold ocean and telling the crew members to imagine that there was a man overboard. Then he’d say, “Now show me what you can do.”

An earlier version of this obituary referred incorrectly to part of Mr. Turner’s education. He received a single degree in politics, philosophy and economics from Oxford University — not separate degrees in each subject.