The last surviving sibling in a family that wrote itself into U.S. history, she was the first Kennedy woman of her generation to take on a serious political role. Jean Kennedy Smith with her husband, Stephen E. Smith, left, in 1976 during a benefit for the Special Olympics at the Pierre hotel in Manhattan. Years later she was named ambassador to Ireland by President Bill Clinton at the behest of her brother Edward.Credit...Larry C. Morris/The New York Times

Jean Kennedy Smith, a Kennedy clan sister who as the United States ambassador to Ireland in the 1990s helped pave the way for a formal agreement to end decades of sectarian violence in Northern Ireland, died on Wednesday at her home in Manhattan.  She was 92.

Ms. Smith was the second-youngest and last surviving sibling in a family that embedded itself in the American consciousness and wrote itself into American history, producing a president and senators and an unrivaled mystique fashioned out of political glory, personal charisma, great wealth and staggering tragedy.

Until the age when most people retire, Ms. Smith led a quiet life of privilege and philanthropy, with palatial homes, summers at the shore and a busy calendar of society and charity functions. She shared family triumphs and tragedies, though always in the shadow of her siblings, including President John F. Kennedy, Senators Robert F. Kennedy and Edward M. Kennedy (the youngest), Eunice Shriver and Patricia Kennedy Lawford.

But in 1993, when she was 65 and the widow of Stephen E. Smith, the Kennedy family’s troubleshooter and financial adviser, Ms. Smith was named ambassador to Dublin by President Bill Clinton at the behest of her brother Edward, known as Teddy.

Ms. Smith was the first Kennedy woman of her generation to take on a serious political job. Like her sisters and the wives of her brothers, she had taken on roles in family political campaigns but not in public service. Her father, Joseph P. Kennedy Sr., had been the ambassador to Britain when she was a little girl, and she had visited Ireland, the land of her ancestors, many times. 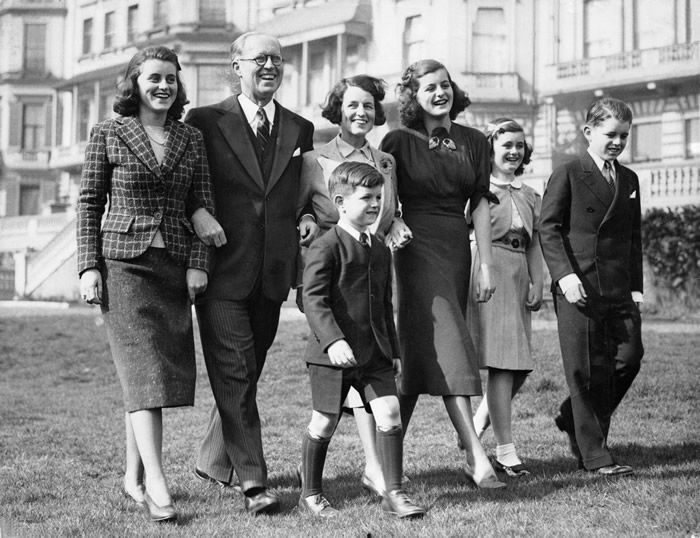 The Kennedy family in London in 1938, after Joseph P. Kennedy Sr. became the U.S. ambassador to Britain. Jean is second from the right.Credit...The New York Times

But she knew little about diplomacy, Irish politics or the intricacies of the sectarian violence known as the Troubles: the Irish Republican Army’s campaign of bombings and assassinations to drive the British out of Ulster and unite overwhelmingly Roman Catholic Ireland with predominantly Protestant Northern Ireland. The appointment was made at a crucial time, as movement had begun toward a settlement to end decades of fighting that had left thousands dead on all sides.

But to many in Washington, appointing a Kennedy to Dublin was good politics. The Irish regarded President Kennedy as a virtual saint and his extended family as dear trans-Atlantic cousins. And they took to Ms. Smith warmly.

Soon she became the second-most-prominent woman in Ireland, after President Mary Robinson. With Irish leaders eager to help, she embraced her job, and over the next five years played a role in the Ulster settlement.

Ms. Smith ruffled feathers, broke rules and brushed aside diplomatic niceties. She was reprimanded by Secretary of State Warren M. Christopher for removing two senior staff members who disagreed with her views. She visited Northern Ireland, a British province and not her turf, and met repeatedly with Gerry Adams, the head of the I.R.A.’s political wing, Sinn Fein, though American policy forbade it.

While many officials in London and at the State Department believed she was exceeding her authority and regarded Mr. Adams as a terrorist mouthpiece, Ms. Smith helped clear the way for a visa that let him go to the United States to make his case for a cease-fire and British withdrawal from Ulster.

Almost overnight, he became a popular son of Ireland in America. Six months later, on Aug. 31, 1994, a cease-fire was declared. At the behest of Ms. Smith, Senator Kennedy and others, Mr. Clinton met with Mr. Adams at the White House in 1995, granting a measure of respectability to Sinn Fein.

When the cease-fire broke down in 1996 over the continued exclusion of Sinn Fein from the peace talks, Ms. Smith summoned Joe Cahill, the I.R.A. leader, and upbraided him. Sinn Fein was finally admitted to the talks, and the cease-fire was restored in 1997. Negotiations led by former Senator George J. Mitchell produced the Belfast Agreement in April 1998. 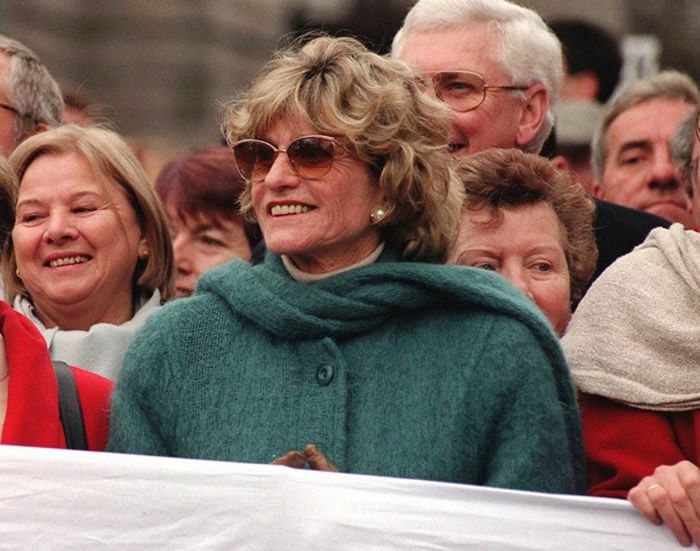 Ms. Smith at a peace rally in Dublin in 1996, when she was the U.S. ambassador to Ireland.Credit...Maxwells/Associated Press

The years afterward were marred by gunfights, political breakdowns, disarmament disputes and other flare-ups. But the Belfast pact is still regarded as the formal document for phasing out decades of sectarian warfare in Ulster.

Ms. Smith’s role — bringing the I.R.A. in from the cold — was important, and she was proud of it.

“The Irish people were willing to take me at face value, to give me the benefit of the doubt because I was a Kennedy,” she said in 1998 as she prepared to end her assignment in Dublin. “I was a cog, really, in the machine that was moving. I was fortunate to be here to perhaps add momentum to what was happening.”

Jean Ann Kennedy was born in Brookline, Mass., on Feb. 20, 1928, the eighth of nine children and the youngest daughter of Joseph P. and Rose Fitzgerald Kennedy. Her childhood was idyllic, with summers on Cape Cod, winters in Palm Beach, Fla., and mansion life in Bronxville, an affluent New York suburb in Westchester County. The Kennedy family in Palm Beach, Fla., in about 1948. Standing, from left, were Edward, Jean, Patricia and John. Robert was kneeling. With them, sitting, was a family friend, Joe Gargan.Credit...John F. Kennedy Presidential Library and Museum, Boston.

She was educated at Roman Catholic girls’ schools and graduated in 1948 from Manhattanville College of the Sacred Heart in New York (now Manhattanville College) with a degree in English. Ms. Smith, tall and angular, was a tennis player and swimmer who loved sailing and hikes on the beaches of Cape Cod. She introduced future wives to three of her brothers — Ethel Skakel, a Manhattanville classmate, to Robert; Jacqueline Bouvier, a friend, to John; and Virginia Joan Bennett, also a Manhattanville student, to Edward.

She married Mr. Smith, a New York financier, in 1956. He oversaw the Kennedy family’s $500 million fortune after her father was incapacitated by a stroke in 1961, and he advised her brothers in political campaigns. The couple had four children.

Ms. Smith’s role in politics, like her sisters’, was to appear at campaign events, starting with John’s races for Congress and the Senate and his campaign for the presidency in 1960. She also raised funds for programs to benefit handicapped children, and for many years she was a trustee of the John F. Kennedy Center for the Performing Arts in Washington. 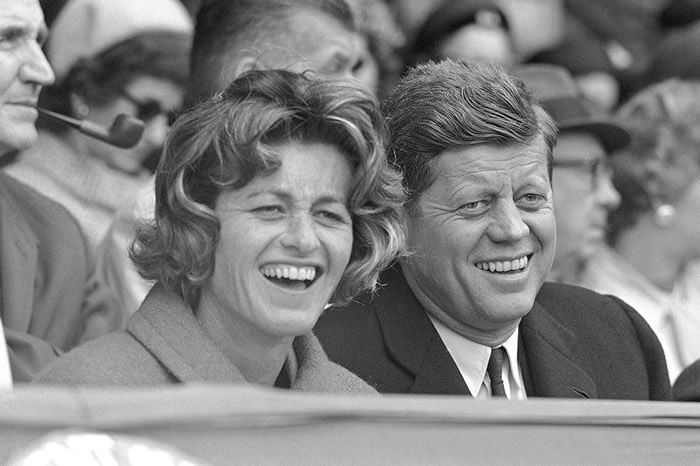 Ms. Smith and President John F. Kennedy were in the stands in 1961 for the Washington Senators’ opening day game at their home field, Griffith Stadium. She shared family triumphs and tragedies, though always in the shadow of her siblings.Credit...Associated Press

In 1974 she founded Very Special Arts, a Kennedy Center affiliate that provides programs in creative writing, dance, music, drama and other arts for thousands of physically or mentally handicapped artists in America and elsewhere. With the writer and editor George Plimpton, she produced a book of interviews with such artists, “Chronicles of Courage: Very Special Artists,” in 1993.

In outliving her siblings, Ms. Smith endured their often shattering deaths. Her oldest brother, Joseph P. Kennedy Jr., was killed in combat in 1944. (She christened a destroyer named for him in 1945.) Kathleen died in 1948 in a plane crash in France. President Kennedy and Senator Robert Kennedy were both assassinated in the 1960s. Rosemary, mentally disabled and institutionalized most of her life, died in 2005; Patricia Kennedy Lawford, who was divorced from the British actor Peter Lawford, died in 2006; Eunice Kennedy Shriver, a champion of the Special Olympics and the wife of R. Sargent Shriver, the first director of the Peace Corps, died in August 2009; and Senator Edward Kennedy died two weeks later. Ms. Smith, in foreground in sunglasses, with other members of the Kennedy family during the funeral for Senator Edward M. Kennedy, her younger brother, in 2009.Credit...Chang W. Lee/The New York Times

Ms. Smith’s husband died in 1990. In addition to her daughter Kym, she is survived by her two sons, Stephen Jr. and William; another daughter, Amanda; and six grandchildren.

In 1991, Ms. Smith sat through the Florida trial of her son William on a rape charge. The case grew out of his visit to a bar with Senator Kennedy and a sexual encounter with a woman at the Kennedy estate in Palm Beach. It ended in acquittal, but television coverage and graphic testimony produced a lurid mix of sex and scandal in America’s most famous family.

Jean Kennedy Smith had always been the quiet Kennedy, doing her charity work but avoiding needless publicity. But in 1993, after visiting Dublin, she discussed the ambassador’s job with her brother, who asked Mr. Clinton to nominate her.

Ending her Dublin assignment five years later, she was asked if she had taken the job with a sense of history — relating the murderous violence in Ulster to the assassination of her brothers.

“I never sat down and said, ‘Now I must make a contribution, that one person can make a difference,’” she said. “But I felt I was in a position where I could contribute. I never thought of it in the light of history or my brothers. I just felt I had an obligation.”

An earlier version of this obituary misstated Ms. Smith's place in the birth order of her siblings. She was the second-youngest, not the youngest. (Senator Edward M. Kennedy was the youngest.)