Galvanized by the assassination of his brother, Medgar, he helped transform Mississippi politics, running for Congress, becoming a mayor and gaining wide attention. Charles Evers at his home in Hattiesburg, Miss., in 1998. After the assassination of his brother, Medgar, in 1963, he replaced him as the Mississippi field director of the N.A.A.C.P.Credit...Rogelio Solis/Associated Press

Charles Evers, who gave up life as a petty racketeer to succeed his assassinated brother Medgar Evers as a Mississippi civil rights leader in 1963, becoming the state’s first Black mayor since Reconstruction and a candidate for governor and United States senator, died on Wednesday at his daughter’s home in Brandon, Miss. He was 97.

His granddaughter Courtney E. Cockrell confirmed the death. Mr. Evers was the third prominent civil rights leader to die within a week; the Rev. C.T. Vivian and Representative John Lewis, both of whom had marched with the Rev. Dr. Martin Luther King Jr., both died on Friday.

But nearly a decade after he had been run out of Mississippi, Charles Evers, galvanized by the assassination that had made his brother a national civil rights martyr, quit the rackets, returned from Chicago and replaced Medgar as the Mississippi field director of the N.A.A.C.P. He organized registration drives for Black voters, economic boycotts against white businesses and challenges to the state’s white Democratic Party structure.

Over the next decade, he became a nationally known civil rights figure in his own right. He was co-chairman of Senator Robert F. Kennedy’s Mississippi campaign for the Democratic presidential nomination in 1968 and a leader of Mississippi’s first racially-integrated delegation to the Democratic National Convention that year in Chicago. He also ran for Congress in 1968, though unsuccessfully.

The next year he was elected mayor of Fayette, Miss., becoming the first African-American in a century to hold that post in that town of 1,600, whose Black majority had for years been kept from the polls by intimidation and violence. The election made headlines across the country, stunning a Deep South that had been forced to confront its racist past and the implications of Black voters’ power at the polls. Mr. Evers, far left in foreground, led a march in Jackson, Miss., in 1966 to mark the third anniversary of Medgar Evers’s assassination. With him were, from left, the lawyer John S. Stillman, Roy Wilkins of the N.A.A.C.P. and the lawyer R. Jess Brown.Credit...Associated Press

“Hands that picked cotton can now pick the mayor,” Mr. Evers said as he mapped changes for a biracial municipality that would throw out Jim Crow ordinances and no longer tolerate disrespect from the police and uncollected trash in Black neighborhoods. (Variations on that quotation would surface in years to come in other political races in which Black voting power had an impact.)

As reporters from national publications visited Fayette to gauge progress, white and Black residents continued to live on opposite sides of a social gulf. But Mayor Evers attracted $10 million for the development of factories, businesses and a medical center, creating hundreds of jobs. And his civil rights campaign across the region made noticeable strides.

“The progress made by the N.A.A.C.P. in Mississippi under Charles Evers has been spectacular,” Current Biography said in a 1969 profile of him, “particularly in the predominantly Negro counties in the southwest corner of the state, where Evers, an insurgent Democrat, has for the first time mobilized Black voting power and effectively challenged the traditionally all-white state party structure.”

Riding publicity that made him a household name in the United States, Mr. Evers in 1971 became the first African-American candidate for governor of Mississippi. His run, as an independent, was backed by Coretta Scott King, the Congressional Black Caucus, Mayor John V. Lindsay of New York and civil rights leaders across the country. In an effort to undercut critics, he detailed his shady past in a memoir, “Evers” (1971, with Grace Halsell), but was defeated by the Democrat, William Waller. In 1978, Mr. Evers ran as an independent for a United States Senate seat that had been vacated by James O. Eastland. He finished third, with nearly a quarter of the vote — a strong showing that siphoned votes from the favored Democrat, Maurice Dantin, and helped elect a Republican, Thad Cochran, with a 45 percent plurality.

After four nonconsecutive terms as the mayor of Fayette — he lost a re-election bid in 1981 and won the office back in 1985 — Mr. Evers lost a 1989 Democratic primary for a fifth term and retired from active politics. He moved to Jackson but continued to reap profits from a shopping center he owned in Fayette.

“It was time for a change,” he said after losing the primary. “I’m tired of being out front. Let someone else be out front.”

James Charles Evers, who rarely used his first name, was born in Decatur, Miss., on Sept. 11, 1922, the oldest of four children of James and Jessie Wright Evers. His father was a laborer, and his mother was a maid, though they owned a funeral home and a sawmill. Charles and Medgar, who was three years younger, once saw a family friend lynched.

They walked miles to segregated schools. “We never understood why the white kids could ride by in their big, yellow shiny bus, while we sloshed through the mud,” Charles told The New York Times in 1968. “That disturbed us. Although we were a little more fortunate than many, we never did feel any different than other Negroes, and Medgar and I always said, When we got grown we’d change it.” 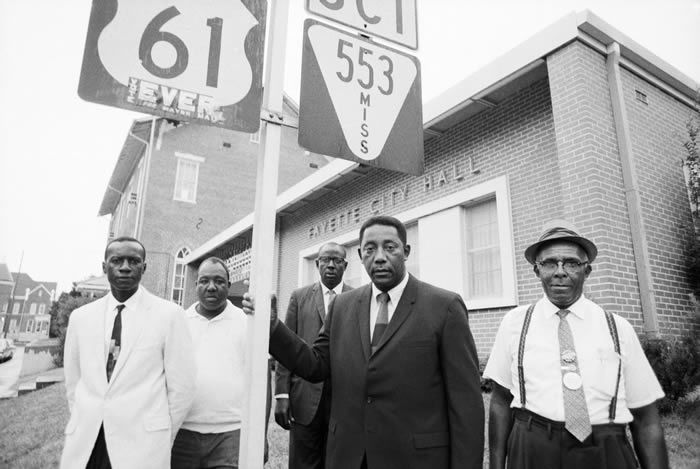 Mr. Evers, second from right, with members of his administration in 1969, the year he was elected mayor of Fayette, Miss. He was the first African-American in a century to hold that post.Credit...Bettmann, via Getty Images

Charles joined the Army in 1941 and served in the Pacific in World War II. He finished high school after the war and in 1950 received a degree from Alcorn A. & M., a historically Black college. (It is now Alcorn State University.)

In 1951, he married Manie Magee. They had four daughters,  and divorced in 1974. Information on his survivors was not immediately available.

After a year serving with his reserve unit in the Korean War, Mr. Evers settled in Philadelphia, Miss., which became notorious for the 1964 slaying of three civil rights workers. He opened a hotel, restaurant, cab service and gas station, became a disc jockey and promoted prostitution and bootlegging. The authorities and business rivals drove him out, and in 1956 he fled to Chicago and continued his businesses and rackets there.

On June 12, 1963, Medgar Evers was shot and killed in an ambush in the driveway of his home in Jackson. Despite clear evidence against Byron De La Beckwith, a white supremacist, two trials in 1964 ended in hung juries. In 1994, he was convicted and sentenced to life in prison. He died as a prisoner in 2001.

Charles was a tough replacement for his brother. He carried a gun, hired bodyguards and used strong-arm tactics in boycotts against white businesses. By drawing Black patrons to his own stores, he profited from the boycotts and alienated many civil rights leaders.

His tactics in a seven-year boycott of white merchants in Claiborne County, Miss., became a First Amendment case in the Supreme Court in 1982. Merchants sued the N.A.A.C.P., saying Mr. Evers had enforced the boycott with threats to break the neck of anyone who violated it.

Overturning a Mississippi ruling, the Supreme Court held that Mr. Evers’s rhetoric “did not transcend the bounds of protected speech,” adding: “A massive and prolonged effort to change the social, political and economic structure of a local environment cannot be characterized as a violent conspiracy simply by reference to the ephemeral consequences of relatively few violent acts.”

Mr. Evers prospered with supermarkets, liquor stores and real estate in Fayette, Jackson and other cities, as the journalist and author Ellis Cose  noted in a Times review of Mr. Evers’s memoir “Have No Fear: The Charles Evers Story” (1997, with Andrew Szanton).

“Had he been born another color or in a more rational age, Charles Evers might have become a celebrated tycoon,” Mr. Cose wrote. “He has a star salesman’s glibness, a trailblazer’s tenacity and the chutzpah of a P.T. Barnum.”