Rudolph Giuliani said on Twitter that Mr. Dinkins, his predecessor as New York City’s mayor, had given “a great deal of his life in service to our great City.” 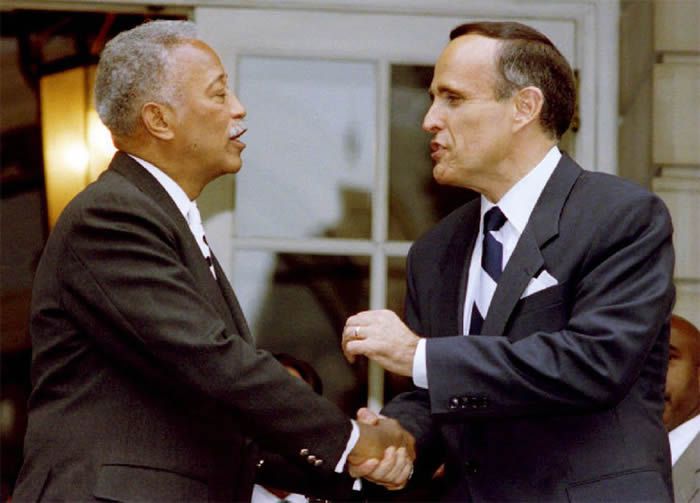 Rudolph W. Giuliani, who defeated David N. Dinkins in New York City’s 1993 mayoral election, was among the first public figures to commemorate Mr. Dinkins in the hours after his predecessor died late Monday at 93.

Mr. Dinkins, a barber’s son, became New York City’s first Black mayor in 1990. He died at his home in Manhattan, less than two months after the death of his wife, Joyce.

Mr. Giuliani was once among Mr. Dinkins’s severest critics. But early Tuesday morning, he said on Twitter that his predecessor had given “a great deal of his life in service to our great City.”

Mr. Dinkins won office on a pledge of racial healing, and he had plans to build housing, improve health care and respond to the concerns of marginalized groups. After his death, several prominent New Yorkers, including the state’s attorney general, Letitia James, praised those liberal instincts.

“For decades, Mayor Dinkins led with compassion and an unparalleled commitment to our communities,” Ms. James, who shattered racial and gender barriers when she was elected to her current post in 2018, said in a statement. “His deliberative and graceful demeanor belied his burning passion for challenging the inequalities that plague our society.”

Mr. Dinkins was a cautious, deliberate Harlem Democrat who climbed to City Hall through relatively minor elective and appointive offices. He liked to call New Yorkers a “gorgeous mosaic,” and he saw himself as a conciliator who might subdue the passions of multicultural neighborhoods with patience and dignity.

Ms. James nodded to that idea: “The voice that gave birth to the ‘gorgeous mosaic’ is now at rest,” she wrote.

Dianne Morales, one of the candidates hoping to replace Mayor Bill de Blasio in the election next November, called Mr. Dinkins “a force to be reckoned with, and a strong advocate for a fairer city.”

Several prominent African-Americans said Mr. Dinkins had been an inspiration to their careers.

Patrick Gaspard, who was the United States ambassador to South Africa during the Obama administration, said that Mr. Dinkins was “grace itself” and “always went high when they went low.”

"He taught me that you don’t need to be loud to be strong,” Mr. Gaspard wrote on Twitter.

My Mayor. David Dinkins was grace itself. Healways went high when they went low. He taught me that you don’t need to be loud to be strong. He took a quiet pride in the small kindnesses. He accomplished much with humility and more strength than the world knew. Rest in our hearts. pic.twitter.com/Yqs4B8M2Xi

A few journalists shared tales of covering Mr. Dinkins in the 1990s.

“Got to cover Mayor David Dinkins for @AP when he traveled to the Dominican Republic,” David Beard, a former Associated Press writer, tweeted. “The people treated Dinkins like a rock star, like their own president.”

Jane McManus, a longtime sports reporter, recalled that Mr. Dinkins was beloved by many people who worked at the U.S. Open tennis tournament.

“I was surprised to see a person I knew as a sober politician be so friendly and such a tennis fan, seemed like he always had that warm half-smile for people he knew,” wrote Ms. McManus, who now directs the Center for Sports Communication at Marist College in Poughkeepsie, N.Y.

“He and Bud Collins are probably up there now debating the best matches they ever saw,” she wrote on Twitter, referring to a legendary tennis reporter who died in 2016.

Mr. Dinkins was rejected by voters in 1993 after one term amid criticism over his handling of four days of racial violence in Crown Heights, Brooklyn. His aides said he insisted on conceding to Mr. Giuliani despite a close result because he did not want to risk inflaming passions in a city that was starkly polarized along racial lines.

Mr. Giuliani, who beat Mr. Dinkins by sweeping the white ethnic neighborhoods in Brooklyn, Queens and Staten Island that were his political base, went on to become, arguably, one of the city’s most dominant mayors of the 20th century, alongside Fiorello H. La Guardia.

He is now President Trump’s personal lawyer and has led failed attempts in court to reverse Mr. Trump’s defeat in the presidential election. Critics have characterized Mr. Giuliani’s work for the Trump administration as a decline into farce by a once-respected figure.

“He took a quiet pride in the small kindnesses,” Mr. Gaspard wrote on Tuesday. “He accomplished much with humility and more strength than the world knew. Rest in our hearts.”