A 95-year-old woman who worked for the commandant of a Nazi concentration camp has been charged in north Germany with aiding and abetting mass murder. 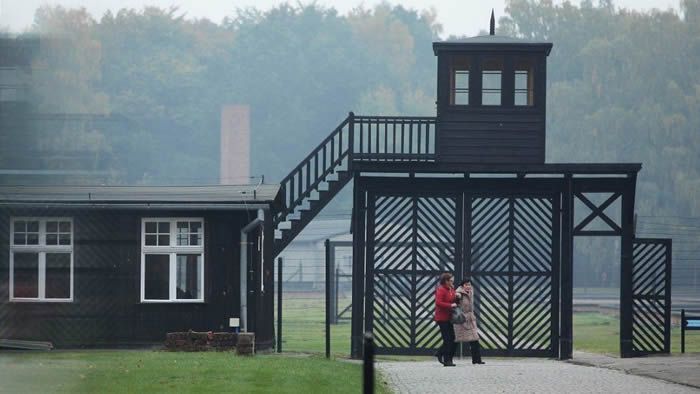 The woman, named in media as Irmgard F and who lives in a care home in Pinneberg near Hamburg, is charged in relation to "more than 10,000 cases".

She was secretary to the SS commandant of Stutthof, a brutal camp near modern-day Gdansk, where about 65,000 prisoners died during World War Two.

It is unclear if she will face trial.

Her role is still being studied.

Stutthof was established in 1939 and guards began using gas chambers there in June 1944. Soviet troops liberated it in May 1945, as the war was ending.

About 100,000 inmates were kept at Stutthof in atrocious conditions - many died of disease and starvation, some were gassed and others were given lethal injections.

Many of the victims were Jews; there were also non-Jewish Poles and captured Soviet soldiers.

A court for juveniles in Schleswig-Holstein now has to decide whether the ex-secretary's case should go to trial. At the time of the crimes she was under 21, so counted as a minor.

She has claimed that she never knew people were being gassed in the camp.

It is an unusual case, as very few women have ever been tried for Nazi camp atrocities, and most cases have focused on camp guards, not secretaries, the BBC's Damien McGuinness reports from Berlin.

She is accused of "aiding and abetting murder in more than 10,000 cases", as well as complicity in attempted murder.

The indictment says she "assisted those responsible at the camp in the systematic killing of Jewish prisoners, Polish partisans and Soviet Russian prisoners of war, in her function as a stenographer and secretary to the camp commandant" between June 1943 and April 1945.

Ex-commandant Paul Werner Hoppe was given a nine-year jail term in Bochum in 1957.

Last year Bruno Dey, 93, a former Stutthof guard, got a two-year suspended prison sentence in Hamburg for complicity in mass murder. At his trial he apologised to Holocaust victims.